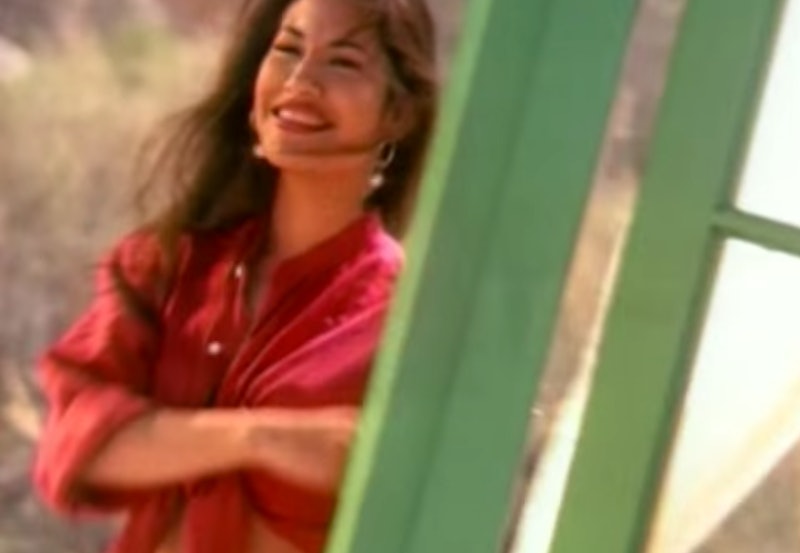 20 years ago today, Selena Quintanilla-Perez, one of the most important figures in popular music history, was murdered by the president of her fan club, She-Who-Must-Not-Be-Named. The legacy Selena left behind is vast: She was the first Latin artist to have an album debut at number one on the Billboard 200, she brought Tejano music to Top 40 radio in the U.S., and she recorded some of the most beautiful songs that may ever grace your ears. La Reina was a gorgeous woman with a gorgeous voice who wore gorgeous costumes and sang gorgeous songs and changed the pop music landscape for the better. She is forever an icon.

If you are not familiar with her story or her music, it is not too late to fix that. Shea Serrano at Grantland wrote quite possibly the greatest introduction to Selena that’s ever been written, and I recommend you read it. If you feel like watching a movie, the biopic, which stars Jennifer Lopez, will reduce you to a puddle of hot tears. And if you just so happen to be in the mood to listen to some tunes, you’ve come to the right place. I’ve rounded up a handful of Selena’s tracks that are worth listening to 24/7/365. These are not the onlySelena tracks worth listening to 24/7/365, mind you. There are at least 50 more. Think of this list as the tip of the iceberg:

Perfect. Everything happening here is perfect.

If anyone dares to question Selena's vocal prowess, send them a link to "Tú Solo Tú". It'll shut 'em right up.

After you listen to "Como La Flor", there's a 99% chance it will be stuck in your head for at least three days. And that's the opposite of a bad thing. I wish "Como La Flor" was stuck in my head every waking moment.

Both the song and the video were released after Selena's death.

"I Could Fall In Love"

Another song and video released posthumously.

Whether or not you speak Spanish, you will be singing along with the chorus in no time. I guarantee it.

Cada vez, cada vez I hear this song, I can't help but bop around in my chair.

If I haaaaad to pick a favorite, "Amor Prohibido" might be it. I just can't resist that chorus.

More like this
All The Best Celebrity Reactions At The 2023 Grammys
By Brad Witter
Lizzo Calls Beyoncé “The Artist Of Our Lives” During Her Grammys Speech
By Alyssa Lapid
The Beyhive Is Mad At Harry Styles After Beyoncé’s Album Of The Year Snub
By Jake Viswanath
9 Photos Of Celebrity Couples & Unexpected Duos At The 2023 Grammys
By Jake Viswanath
Get Even More From Bustle — Sign Up For The Newsletter
From hair trends to relationship advice, our daily newsletter has everything you need to sound like a person who’s on TikTok, even if you aren’t.