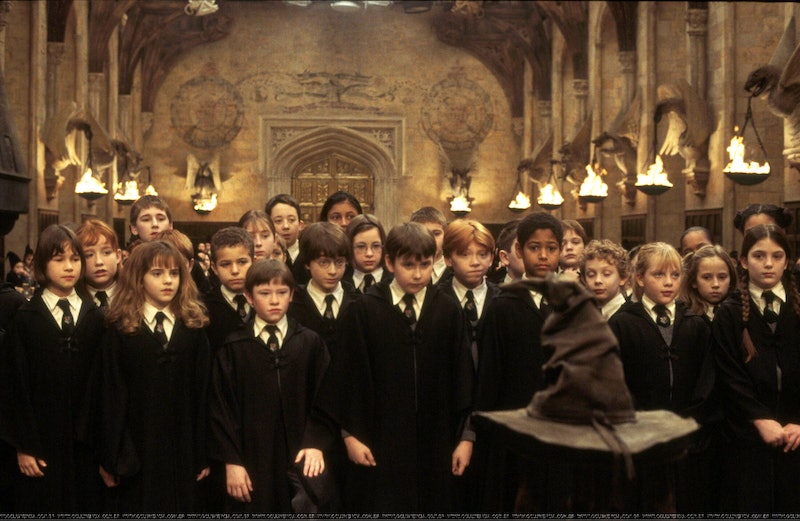 I grew up as a reader, and spent tons of time with slim, easy reads, but the first big book I read was Harry Potter and the Sorcerer's Stone. I was nine, and I started out with my mom reading it to me night after night.

One night, we got to the chapter called "Halloween," and stopped for the evening. I begged her to keep going but she said it was late and put me to bed. The next day was a Friday, when my parents always napped, and while they were asleep I opened the book and read a whole chapter. Later that night, when my mother started reading to me, I'd confessed to her that I'd already gone through it all. She laughed, gave me the book, and that was that. I was the ruler of my own Harry Potter universe from that moment forward.

Although my particular experience may be unique, I know lots of Millennials for whom Harry Potter was the turning point — the thing that made them into readers and encouraged them to seek out more books. But do you remember how you reacted to each book as it came along? There's nothing quite like reading HP for the first time. For me, it went something kind of like this:

Wait a second. This book is called Harry Potter and the something something. What's with these Dursleys?

There's a cat who turns into a woman, and a really tall guy who's turned off all the lights on the streets and then a giant on a motorbike, and I think they're saying a dark age has passed. What's going on?

Ah! There's Harry Potter! I get it now.

Harry Potter is being treated so badly by the Dursleys. This is really upsetting. And all these letters start arriving for Harry and and he's being treated even worse. Someone, do something! This needs to get less depressing!

Harry is a wizard, which is really cool, plus he basically saved the world when he was a baby, so screw you, Dursleys.

So first there's a troll, and then there's a really, REALLY big three-headed dog guarding something. And Harry and Hermione and Ron are almost killed both times, and things are getting real.

Draco is such a meany. What's with him? He's like every bully you've ever known and hated plus 10 meany points. And Snape is also an asshat. Harry hasn't done anything, so why are they being so mean?

Christmas is the most beautiful thing at Hogwarts (especially if you never got to experience Christmas...). There are gifts for everyone, and Ron and his brothers are great. Harry gets an Invisibility Cloak, which used to be his dad's! And he gets to see his mom and dad for the first time ever. The #feels are overwhelming.

Harry and Hermione are all caught when trying to get rid of Hagrid's dragon egg (his illegal winnings at a drunken card came). Neville and Draco are caught the same night. This is serious trouble now, because they have to go into the Forbidden Forest and once they're there. There are mysterious centaurs and unicorn blood and someone drinking it. Harry knows who it is because his scar is on fire. It's You-Know-Who. What's going to happen?

They're going down the trap door. They're doing it. They put Fluffy, the three-headed dog, asleep. They're going through all those tests. All of which are the coolest thing ever and they are so badass for managing to get through them.

It was really hard to believe that You-Know-Who was really around because how scary is that? But then not only is he there, he's kind of the split personality of Professor Quirrel! And he's really, truly, terrifying. He's not just mean, he's power-hungry, he's desperate.

Everything turns out okay. Dumbledore tells Harry (and us) how Lily Potter died defending him. And everyone loves Harry again (they didn't for a while) and, best of all, Gryffindor wins the House Cup, because Dumbledore is kind of biased and no one cares, because everything is really okay now.

More like this
Netflix Shut Down 'Bridgerton' S3 Rumours About A “Very Dark” Storyline
By Bustle
Rupert Grint Just Shared A *Major* Update About Ron Weasley’s Future
By El Hunt
Jessica Simpson On The Time She Was Pursued By A Backstreet Boy & An *NSYNC Member
By The Editors
We’ve Entered The Hot Boy Reader Era
By Samantha Leach
Get Even More From Bustle — Sign Up For The Newsletter
From hair trends to relationship advice, our daily newsletter has everything you need to sound like a person who’s on TikTok, even if you aren’t.