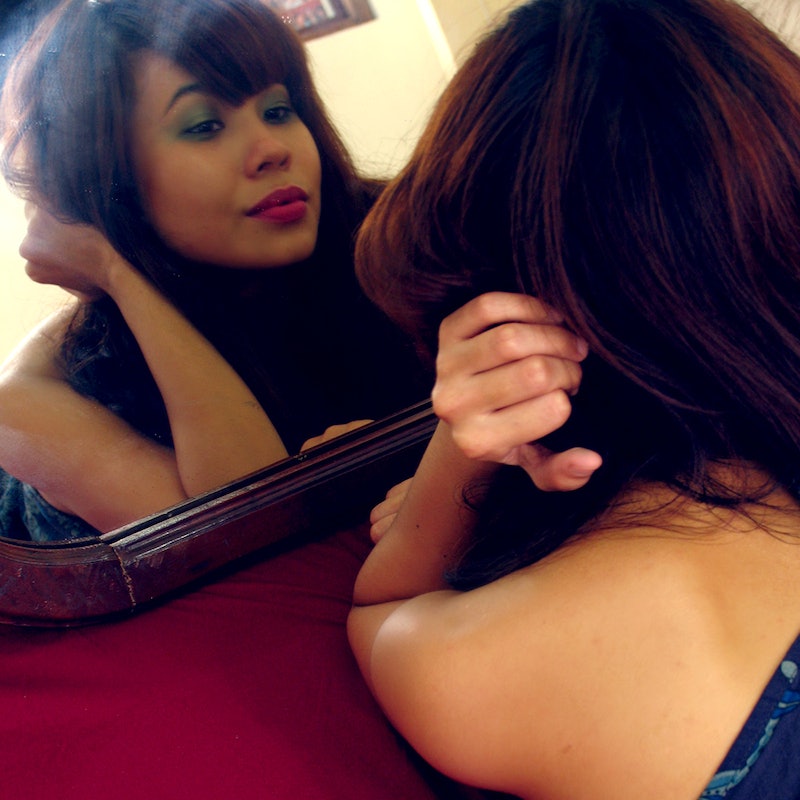 After reading that study about the health benefits of narcissim earlier today, I'm sure I'm not alone when I say that I jumped fairly quickly from it to the following question: Am I a narcissist? It's estimated that Narcissistic Personality Disorder, or NPD, is present in 0.5 percent of the general US population, which doesn't sound like a lot—but as is the case with… well, pretty much everything, it's not entirely outside the realm of possibility. Is there a test I can take to find out whether I do have narcissistic tendencies? And if there is, might that test be floating around on the Internet somewhere? Good news: Yes, there's a test — it's called the Narcissistic Personality Inventory — and yes, it's available online. Isn't technology great?

Here's what I found, thanks to a dash curiosity and a touch of Googling: The Narcissistic Personality Inventory was developed in 1979 by Robert N. Raskin and Calvin S. Hall as a way to measure narcissism as a personality trait. These days, the most commonly used version of the inventory is one Raskin actually developed later on: The 1988 one, which he created with Howard Terry. The interactive version I took seems to be a sort of hybrid of the two, so do with that what you will. This version is housed at a website called Personality-Test.info, which acts as an online repository for psychological tests and personality inventories of all sorts. If you want to take the Big Five Inventory, the Artistic Preferences Scale, or Cattell's 16 Personality Factors Test, they're all they're too, so go nuts.

It's worth noting that the purpose of the NPI isn't, nor ever has been, to diagnose Narcissistic Personality Disorder. Rather, it was meant to aid in social psychological research — which means that even if you get the highest possible score on the NPI, that doesn't necessarily mean that you have NPD. Definitely keep this caveat in mind if you decide to take the test; you don't want to end up doing the psychological equivalent of cruising WebMD for hours and deciding that you have every deadly disease known to humankind. Self-diagnosing yourself based on what you read on the Internet is pretty much always a bad idea, soooooo… yeah. Don't do it.

Here's what my experience was taking the Narcissistic Personality Inventory:

The NPI consists of 40 pairs of statements. For each pair, all you have to do is pick the one you associate with the most. Easy-peasy, right? The test is short, so it shouldn't take you more than five or 10 minutes to complete. I won't bore you with the list of all 40 questions, but here are a few of the topics they cover:

1. How Assertive Are You?

I'm relatively confident, but I could probably stand to be more assertive. Sometimes it's a struggle not to let myself be a doormat. (This is something I'm actively working on.)

I seem to have gotten more cautious as I've gotten older. I'm kind of worried about how much of a scaredy cat I'm going to be when I'm 70 years old.

3. How Do You Feel About Success?

I'm generally pretty good at what I do, so yeah, I would consider myself relatively successful. At the same time, though…

4. How Does Happiness Fit Into Your Plans?

...Success is kind of a means to an end. I like knowing I've done a good job at something, which tends to feed into my overall sense of happiness. There are plenty of other things that affect it as well, though, so I'd argue that success is just one part of the overall happiness picture. Obviously I want to be as happy as possible, because feeling unhappy is not fun at all.

5. How Competent Do You Think You Are?

To be honest, I'm pretty sure that all adults are just pretending they know what they're doing and hoping no one knows they have no effing idea. Just sayin'.

That sounds like the worst job ever. Seriously, you guys. I don't want the pressure. Someone else can do it.

I strongly believe that no one has the right to dictate how you live your life except you. End of story.

The higher your score, the more prone to narcissism you are. I scored a four, which actually strikes me as… maybe not so good. Remember how narcissism does come with a few benefits, like a strong subjective sense of self? Scoring too low might be indicative of a lack of confidence. Hmmm. Maybe I need to work on my self-esteem. But even with that concern, it looks like I'm hanging out somewhere in the normal curve — according to the graph, which shows what the larger trends are, most people seem to be somewhere in the four to 14 range. For the curious, here's how I ranked on a few of the specific markers of narcissism:

One of the other tests housed at Personality-Tests.info is called the Short Dark Triad test, which I will admit first drew my attention because it sounds like something out of a high fantasy novel. If you're interested in the NPI, though, you might want to check out this one, too — it tests not only narcissism, but also psychopathy and Machiavellism (together, the three make up the so-called “dark triad”). The test itself urges you to keep your results on the down-low — “the dark triade traits are loaded subjects,” it says — so you'll forgive me if I don't post my numbers here; however, it can be kind of interesting when taken in tandem with the NPI.

As always, it wise to take the results of Internet tests with a grain of salt; you really need an expert to diagnose any of these disorders, so don't freak out too much if you scored highly or lowly. But maybe it's a good reminder for us all to keep our egos in check. A little self-confidence is good — but don't let your head blow up like a balloon. The “health benefits” of narcissism will only take you so far.

Head here to take the Narcissistic Personality Inventory online yourself.