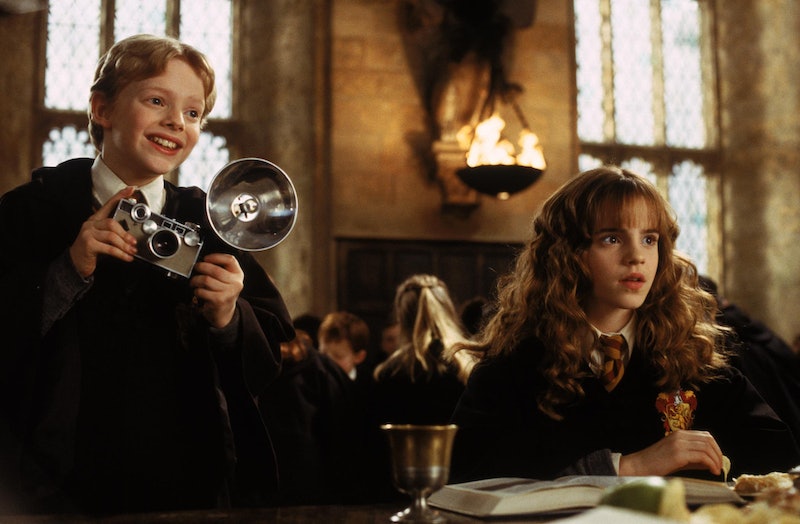 So you got through Harry Potter and the Sorcerer's Stone. You did it, and you loved it, otherwise you wouldn't have progressed to the second book, right? Right. But the first book left off with this super-positive note, remember? It was all like, Yeah, I'm Harry and I'm going to have fun with my cousin this summer because I'm going to freak out him and my aunt and uncle because I can do magic and they can't. And you were all like, Yeah, you go, Harry!

But then you started Chamber of Secrets and everything became hella depressing and pretty terrifying. I mean, as an adult, I recognize what the Dursleys did to Harry as full-on abuse as well as neglect, but I was still a kid when I read Chamber of Secrets for the first time, and it was just plain scary. Being locked in your room? Not being allowed to do magic? Having Hedwig locked in her cage? This is terrible! It only got worse from there. It is a dark book for a young audience (According to Mary B. Stuart, "It feels almost as though Stephen King donated a few lethal paragraphs to the book's ending.") and I well remember my own reactions as I read it. Maybe you recognize these, too?

OK, so Harry not only has a birthday alone but this elf shows up in his room and then ruins everything? Harry gets an official letter from the Ministry of Magic! He's 12! How can that even happen? Are the police going to come after me too if I do something wrong?

So flying car, yes, but more importantly, the Weasleys are my favorites. The Burrow is my favorite. Can I live there? Please? One day?

Knockturn Alley is really weird, and it's like suddenly I really get what the Dark Arts are. Also Malfoy's dad is super-scary and Malfoy is weeny.

OK, so I wouldn't have known that word when I was reading, but that's what the feeling is when Ron and Harry can't get through the barrier at platform Platform 9 ¾. How even? What even?

Ooooh yeah, flying a car to Hogwarts. You're such badasses!

Gilderoy Lockhard and everything he touches is gross. He's like the worst filmstar you've never met and never want to. He's so conceited that even as a kid I figured out how gross he was.

Because who the hell petrifies a cat? This is terrible. I know nobody likes Filch OR his cat, but seriously, poor cat.

This whole Chamber being open thing is squicking me out. And Salazar Slytherin was a huge bigot. Also please, no, don't drink the Polyjuice Potion, just don't, don't, don't — ugh, poor Hermione.

Quidditch was so fun during the last book! And now? Now it's turned deadly and Harry has an arm broken by a terrifying Bludger, and what's worse is that then poor Dobby comes into the scene, which I really was NOT expecting. I mean, OK, he tried to stop Harry coming back from school but physically harming him? That just seems unlikely from an elf who bows down to Harry like that (though Harry tries to make him stop so kudos to him).

HAGRID? Hagrid is the one who released the "monster" into Hogwarts all those years ago? But — but — he's one of the good guys! How is this possible? And who's Tom Riddle anyway? I don't like him.

HERMIONE, NO! But wait, she's left a clue and okay, so they're going underground again and with Lockhart of all people and... Ginny? What's Ginny doing down there?

Tom Riddle. You Know Who. Same person. Same asshat. This time he's gone too far. I mean, Ginny? Seriously? She's an innocent! She has no stake in this! But, thank goodness...

The diary is pierced and dead, Ginny's okay, and Dobby's free. So... all's well that ends well?