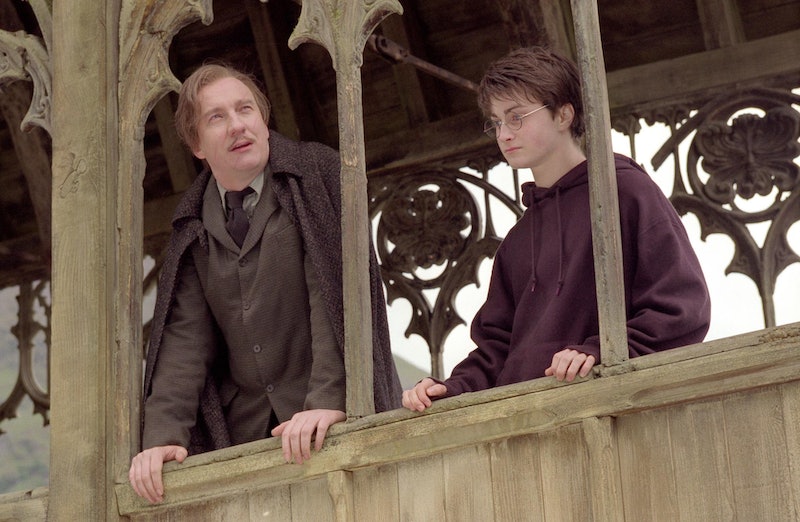 When Harry Potter and the Prisoner of Azkaban came out, J.K. Rowling's fans didn't even need to crack the covers before freaking out. I know this first hand because my mom bought a copy for one of my cousins, and I witnessed her literally jumping up and down with joy, clutching the hardcover to her chest. (Not that I did that myself... no... not at all.) I had friends who lined up at midnight at bookstores to snag a copy the minute they could. This book helped launch Rowling's stardom even more (at the time, we didn't think it was possible — but little did we know how BIG she'd become, right?).

Seeing Harry finding a workaround for how to study, watching him get his birthday presents... the cockles of my heart are trembling with warmth and contentment.

Who is Aunt Marge, who does she think she is, and hey, pit bulls are only mean when you train them to be that way, which makes her doubly evil. But then, of course, Harry gets landed with another letter and all goes to hell. Well, damn.

Harry's on the run? He's a fugitive? This is insane, he's doing more magic, this can't be a good thing, stop it, Harry, stop it!

Everything's okay. Politicians (tee hee, Cornelius Fudge, basically the best name for a head of government ever) have a lot of power and can clear your record. Plus, a free stay at the Leaky Cauldron? Hell yeah.

Serius Black is after Harry. This is bad.

There's a weird teacher at the back of the train car and the lights go off and the train to Hogwarts is stopping — it never stops — and there are Dementors. Dementors are seriously creepy. They breathe like Darth Vader but can suck your soul out too.

Hogwarts is Hogwarts and Professor Lupin is the bomb, a teacher who can finally teach Defense Against the Dark Arts. Snape/Draco are asses as usual, but Quidditch training is cool and it's so good to be back in the hallowed halls. And Hagrid is teaching! How weird/cool is that?

So, yay, the Weasley twins give Harry a super dangerous (but awesome) map that lets him get into Hogsmeade illegally. But then it only makes him feel worse because now he knows that Serius Black was a friend of his parents and betrayed them.

Buckbeak is being executed! Scabbers appears and then runs off and Ron ends up being dragged down into the Womping Willow's based! Crookshanks finds a way in and there's Serius Black and then Lupin and there's violence and they say Black's innocent while it's Peter the rat who was, well, the rat, and then Snape shows up and what's going on?! I need a bag to hyperventilate into, please.

Harry and Hermione go back in time with Hermione's nifty Time-Turner, and you know what, this is just getting insane. They save Buckbeack, then Serius Black, and then run back to the hospital wing, and I am freaking out because they're so close to being caught and screwing with the Doc Brown space-time continuum I remember from Back to the Future.