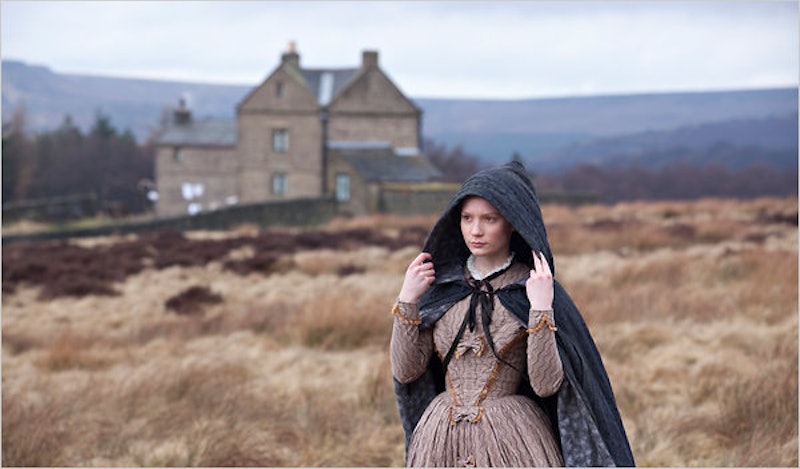 If you were forced to read Jane Eyre in high school or in a lit comp class in college and you hated it, then I'm here to tell you that you MUST read it again. Seriously. It's one of those classics that stick with you because (like most classics you read and reread) it exposes new layers to you every time you read it. It's happened to me each time without fail. It's also incredibly groundbreaking — Charlotte Brontë, who wrote the novel under the pen name "Currer Bell," has been called "the first historian of the private consciousness."

Private consciousness is right. Brontë was one of the first women to write a first-person narrative novel about a woman. And the story of her character and narrator, Jane Eyre, is one of the most complex and heartbreaking you'll find today. It's also spawned some of the most well-known TV tropes, the so-called madwoman in the attic.

A classic that (hopefully!) will never go away, Jane Eyre is still a total emotional ride, and one that never leaves me dry-eyed. I always get a pounding in my heart, especially now when I'm older and begin to realize quite how horrible some of the things Jane goes through are. Reading the book start to finish... well, yes, it's long, but deal with it, because you're going to feel a whole bunch of things.

Poor Jane! She's not only being bullied by her older cousin, she's being abused. It's terrible and makes me want to pull her out of that house and save her.

They're sending her to a time out when she was the one who got hit? Are you serious? OK, so maybe this is only me, but as I got older I began to see Jane's cousin's abuse and the red room as being synonymous for sexual abuse happening there. Which makes me even angrier.

Jane gets to leave her abusive household! She's going to Lowood!

Lowood is terrible. And poor Helen. Jane's only friend, and she dies in her arms.

Jane has suffered so much, and now she arrives at this place, Thornfield Hall, which is so obviously going to be terrifying and awful. I mean, it's called Thornfield. And then Mr. Rochester, all mean to her, and weird things happening in the house, like that fire. Plus, suddenly Jane has to go back to her childhood abusive home and hear the confession of her screwed up aunt? It's too much. My nails are down to the quick.

Wait, Mr. Rochester is marrying BLANCHE? And then Jane sort of confesses all her feelings to him, which he interprets as her being in love with him? And then he proposes? WHAT IS GOING ON?

Mr. Rochester is already married and that he has been keeping his wife locked up in an attic for years and that he proposed to Jane anyway (and this is in a time where three-way relationships were not a thing, OK? So let's not get all uppity and alternative-families-are-great here, this is a book of its time). Hatred of mankind ensues.

Then again, it IS a book of its time. Mr. Rochester taking care of Bertha at home, hiring a nurse to be with her day and night... that kind of home-care was pretty much unheard of back in the 19th century. Berthas were sent to institutions that were basically jails for people with mental illnesses. I still don't like how disgusted Mr. Rochester is with Bertha, but you know what, at least he didn't ship her off to die in a cell. I still get why Jane decides to run away. She doesn't want to be a mistress and she wanted Mr. Rochester to be honest with her. Fair request, I'd say.

Jane is hardy, and I'm not worried about her that much even though she loses her possessions and all that (she's a survivor, this woman) until she gets taken in by St. John Rivers. St. John (pronounced Sinjin) is super religious and tries to both get it on with Jane and teach her morality. Screw morality, Jane isn't going to fall for the nice guy syndrome that St. John so clearly suffers from.

Jane hears Mr. Rochester's voice calling out to her (like, she actually hears it echoing across mountains and stuff, it's super weird) so she rushes back to Thornfield, and finds that the house has been burned to the ground (Bertha, of course) and that Mr. Rochester is blind and old and hideous.

They're together — yay! But they've lost everything — boo. And Mr. Rochester is ugly as if that should match Jane's "plainness" which is not really okay at all, but they're so happy to be together again and Jane is basically in control of everything now since she's inherited money and is going to be the one to take care of Mr. Rochester. So, yeah, happy-sad (sappy? had? sadpy? hapad?) is the only way I can describe that ending feeling.