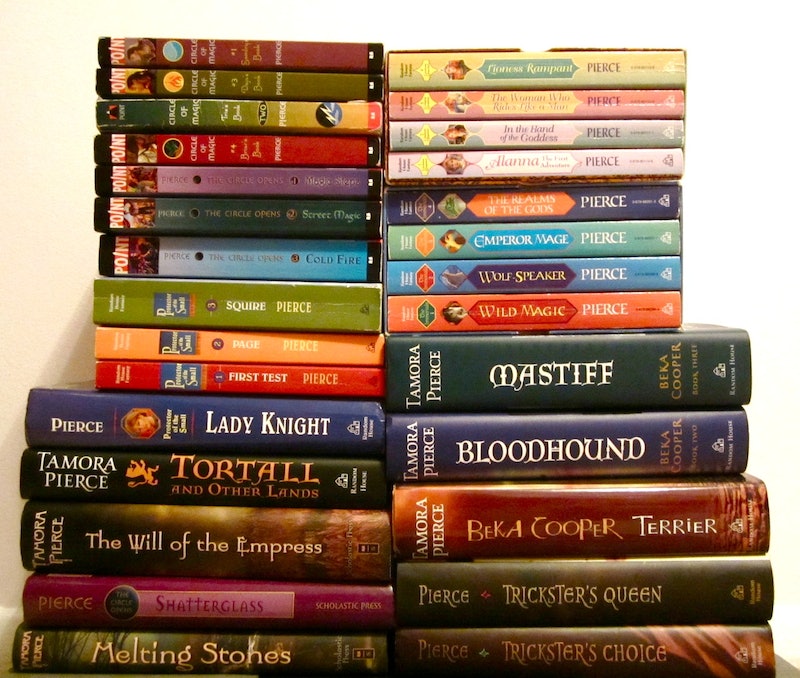 There is a thread on Reddit devoted entirely to anything and everything Tamora Pierce — that is how beloved she is. If you don't know her, then I suggest you go out, right now, and walk — nay, RUN — to your local library. Request everything Tamora Pierce has ever written. Then take that very large bundle home, and read the books (in order if possible), and cry, and fall in love, and become a fangirl (or boy or person).

It's worth it. As all fans of Tamora Pierce know, she is the Queen of Badassery, the Emperor of the Feels, and the Creator of Really Amazing Characters.

I read Alanna, her first book, in 24 hours, which for 11-year-old me was a big deal. And then I bought the rest of the Song of the Lioness Quartet. And then... everything spiraled out of control and I now own every single one of her books, and buy them in hardcover when they come out. I met my roommate and best friend in college when we were geeking out about books and discovered we were both Pierce fans. I found out that even some of the more liberal-minded men out there read her (and I automatically like them all better). Her world building is strong, her characters unique, and her emotional capacity is as deep and wide as a mighty Tortall river.

Are you a fellow fan? You'll get all of these things:

Admit it, you loved that amazing scene when Alanna and Jon first have sex. When she lets herself be a girl for the first time. And Jon knew before George. But George is amazing! But Jon is a king! And his wife ends up being cool, but come on, she's no Alanna... and what about that red-haired dude in between? He totally didn't deserve her, let's be fair.

Tortall is awesome. Birth control is a necklace. No fair.

If You Ever Had a Horse Phase (or Just Love Animals), You Wanted to Be Like Daine

The first time we see her is when she's talking to horses and you're like, Damn, that's not just a horse whisperer, that's even better.

You Know That, Hands Down, the Most Badass Scene Ever Is...

...when Daine storms a palace with a bunch of freaking skeleton dinosaurs. There is nothing more epic in all of Tamora Pierce's books. It's just a perfect moment for everyone (other than the Carthaki people, but they've been dicks to Daine and to Tortall so they kind of deserve it, you know?).

You Love How Kel Is So Not Homophobic

She's all like, Joren, you're not insulting me by calling me a lesbian or this other dude gay because, like, what's the problem with men sleeping with men and women with women? And then you're all like YOU GO, GIRL.

You're Kind of Freaked Out By How Perfectly Planned Everything Is

You Felt That Utter Shock When the Trickster Series Started

Because suddenly Alanna and George have kids, and Alanna and Kel are friends. And then Aly, Alanna's daughter, is the coolest spy ever.

You Were In Love With Crow-Dude Right From the Start

He's so cute! He nibbles on Aly's hair! He is respectful of her boundaries! He's also very helpful with the spying and all. Which is nice.

You Admit (Secretly) That Aly Is Even Cooler Than Alanna

Aly is more of a wits and smarts kind of person than her knighted mother, who seems to have become a stubborn and cold person (although if you had to sneak into knighthood by pretending you were a guy for eight years, you might have some issues, too). Aly uses codes and spies and these weird and adorable little blobby things that always remind me of Flubber in order to get stuff done and help bring about a popular uprising to bring the native islanders back to power. It helps that the god she's in touch with is the Trickster, who's way cooler than Alanna's Goddess.

You Didn't Feel As... Feelsy About the Circle of Magic Series

But still feeling feelsy enough to read all of them, and the Circle Opens series, AND the Will of Empress, where everything is totally paid off because Daja comes out as a lesbian and finally you put two and two together and realize that Rosethorn and Lark were a couple all along.

You Were Nervous About the Beka Cooper Series

The first of Tamora Pierce's books being told in first person, it takes place so many years before everything we already know about Tortall that it feels like a forced rip backward in time.

But Then You Actually Adore Beka and Her Cat

Especially the cat. Because it's the same constellation cat as Alanna has for all those years! Everything comes full circle!