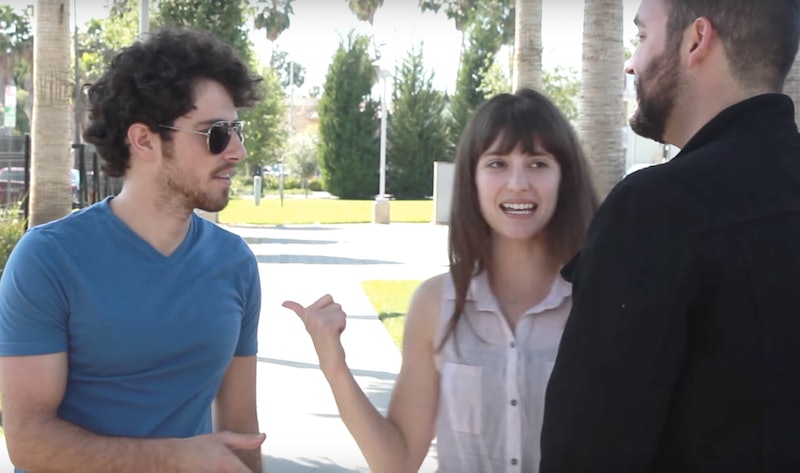 Dating, when done successfully, eventually (theoretically) spins into a partnership. The terms "boyfriend" and "girlfriend" seem antiquated and reductive to some, since they don't do much to express the complexity or seriousness of some of the relationships they're attached to, yet their usage continues. No matter what you label someone per their role in your life, both parties must agree to the relationship label, that they are there in their relationship (and the fact, even, that it is now a relationship!). AND, they must agree they're ready to announce in shorthand to the world some generally assumed qualities that come along with those titles. Before we ever get to that level, we go through a progressive series of other labels for the person we're dating.

Each relationship is unique and embraces different rules, goals, etc., but for the sake of brevity and maybe tradition, we perpetuate titles anyway. It's a quick way to communicate a person's complex role in your life. For example, the title "boyfriend". It can apply to someone you've been dating for eight days or eight years, and yet somehow, it's expected to encompass both situations accurately. Ugh. Before we get to that point though, like I said, there are many hurdles to clear and titles to try on. These names usually reflect various facets of the blooming relationship. It's bonkers, but it's dating, so what did you really expect? The general series of reference titles go like this:

At the beginning of seeing someone, your aloofness is positively correlated to how hot you seem so sticking with something super chill like "This Guy I Guess" is way appropriate. Any sort of identifying words included in their title suggests interest and that's basically the equivalent of the Mortal Kombat GAME OVER text crossing your proverbial dating screen.

2. A code name that allows you to identify who they are without the "way too personal" act of actually using their name

Listen, bad first date stories are some of the most popular stories to share with friends and at parties. Also, first dates are traditionally awkward as hell to downright nightmarish. Once this person makes it past that date and is still on the radar, they get a nickname like this.

When you decide you might actually like someone, you ditch the potentially mean code name for one more descriptive so friends can follow along with who you're actually talking about.

4. Their real name only

Anytime you're forced to introduce this person to someone else, you might have to call them something other than "Princess Di Guy" or whatever. So you'll use their name. But that's it. No further descriptive labels that hint at their role in your life, because ain't nobody ready for that can of worms yet. Just, "This is [name] and they are standing next to me and that's really all I can say for sure at this point."

Examples: "Nora", "Justin", I'm stopping here because I don't know the real names of the people you date

5. A person you're "hanging out with"

Which is different than hanging with friends or coworkers, obviously, but not as serious as dating. Air quotes are a nonverbal way to acknowledge both you and the person you're talking with understand this kind of hanging out often involves making out. But, I mean, I think the air quotes are superfluous at this point. We all know what "hanging out" means.

Hey, now! Look at you! "Seeing" has an immediately more committal connotation than "hanging out with". Consider that a step up.

7. ...who you have sleepovers with, regularly

It's true. But it doesn't end there...scope a new video from BuzzFeed below that fully, accurately goes through the series of titles new partners go through until the relationship is solid.

Essentially, titles exist exclusively for people outside the relationship. Meaning, they are a courteous measure we shouldn't feel obligated in continuing, yet...we will. Forever. Silly as they may be, it's kinda whatever because now you've gotta bae and you two get it:

Love is nice. Endlessly weird, but sure nice.

More like this
The Best Time To Date After A Breakup, According To Experts
By Bustle Editors
The Top Mistakes Scorpios Make In Relationships (& How To Avoid Them)
By Nina Kahn
12 Ways You're Sabotaging Your Love Life
By Teresa Newsome and Lexi Inks
Is It A Rebound Relationship Or The Real Thing?
By Carolyn Steber and Lexi Inks
Get Even More From Bustle — Sign Up For The Newsletter