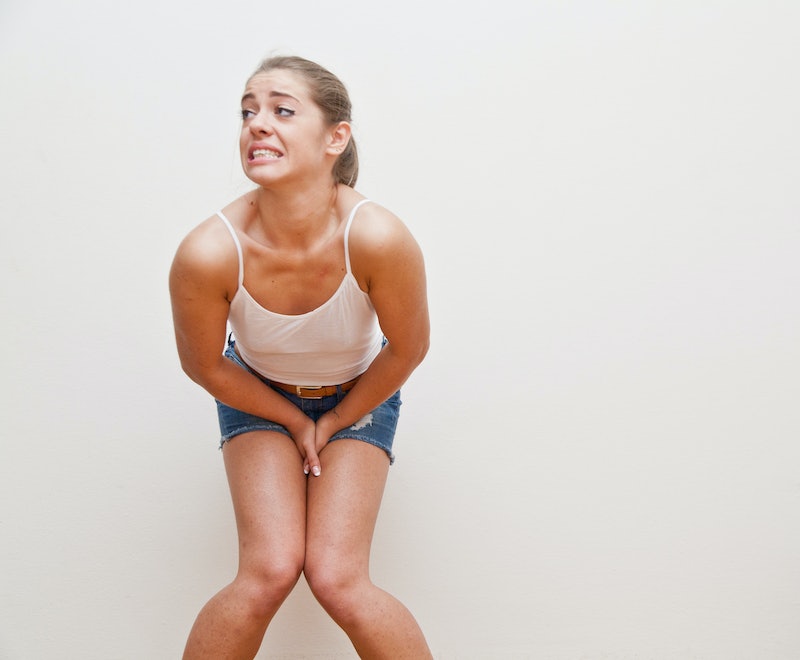 Have you ever wished you had a hands-free vibrator that (wait for it)... is literally implanted in your genitals so you can orgasm whenever, wherever? If so, all your wildest dreams are about to come true because Fun Factory's vibrating vaginal implant, Orgasmia, does exactly that. Also, if you managed to read that without having to fight not to slam your legs shut, your genitals are made of sturdier stuff than mine. Developed by a "team of German doctors" and powered by body heat, as are all such visionary new technologies, the Orgasmia is a V-shaped implant that is placed against the clitoral legs in an outpatient procedure. If that sounds as unpleasant to you as it does to me, worry not! The implant is covered in medical-grade silicone, and people "

stop noticing it after only 3-4 days of use," Jezebel reports. A mere 72 hours of noticing the motor stuck on your pelvis? Sounds like a grand ol' time. Better yet, the Orgasmia also comes with a 20-year warranty, after which the company covers half of the medical costs. Plus, if you decide that being able to orgasm with a touch of an iPhone app isn't for you, it's reversible.

<img alt="" src="http://38.media.tumblr.com/241737a6a4fc6cef8730c28fdf7893ec/tumblr_mrcu64VF3e1szf0s6o1_500.gif" class="article-body-image"/>According to Jezebel, the procedure is only available through one surgeon in Beverly Hills, although surely it won't stay that way for long. I can't imagine why they would have trouble finding participants for a clitoral implant trial.

<img alt="" src="http://media.tumblr.com/7e598d33920ce149b102a9165edb4aed/tumblr_inline_mkgsf8LEuS1qz4rgp.gif" class="article-body-image"/>All joking aside, it's pretty awesome that someone's focusing that much on female orgasms. While it may not be the "female Viagra" that the world has been searching for, it is true that up to 80 percent of women report having difficulty with orgasm through vaginal intercourse alone. The clitoris is still a relatively unknown structure as well. While we know pretty much everything there is to know about the penis, scientists only recently bothered to study the clitoris enough to realize it's actually a largely internal structure. If that doesn't speak volumes about cultural attitudes toward the female orgasm, I don't know what does.So if you aren't terrified by the thought of having a vibrator implanted on your genitals, more power to you! Head on over to the Fun Factory website to see if you can get their "early adopter" discount. In the meantime, my squeamish self is going to stick to boring, regular vibrators, because futuristic sex toys are made for much braver people than me.

More like this
35 Sexy Texts To Send Your Partner
By Griffin Wynne and Carolyn Steber
What Are Swingers? Everything You Need To Know
By Lexi Inks
13 Ideas To Add To Your Sex Bucket List
By Kristin Magaldi
GIRLI & Q Fell In Love At A Skatepark & Never Looked Back
By Jessica Morgan
Get Even More From Bustle — Sign Up For The Newsletter