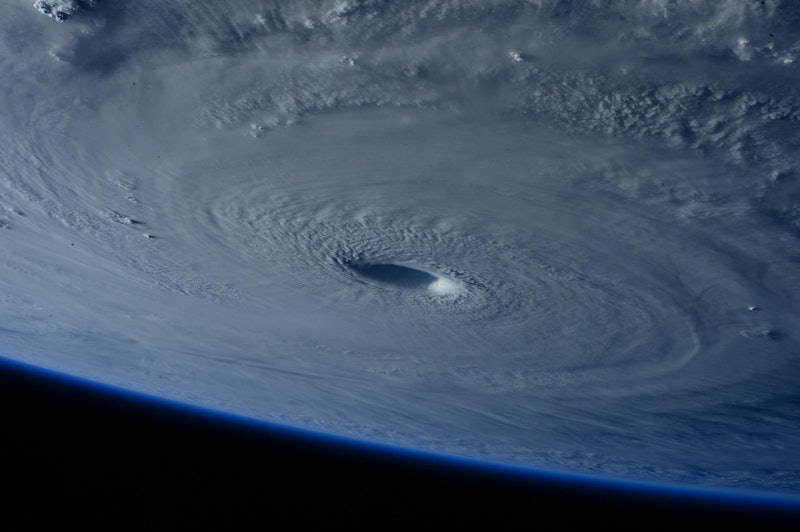 Ever wonder what a super typhoon looks like from space? Now, thanks to a video captured by International Space Station, you can see the breathtaking imagery of a giant storm from Earth's orbit without actually having to board a space shuttle. This week, Super Typhoon Maysak swept through the Pacific Ocean, reaching winds of up to 160 mph. The powerful storm passed Yap Island on Wednesday, and according to the Associated Press five lives have been claimed in Maysak in Micronesia. Maysak is expected to hit the Philippines on Sunday or Monday.

Astronauts aboard the spacecraft also took photos of Maysak and posted them online, allowing us here on Earth to get a better picture of our planet's natural wonders from space. The amazing shots show us the unbelievable beauty of the Earth as captured from above, and even though Maysak is a devastating typhoon on the ground, it's created an overwhelmingly powerful view from space. Remarking on the super typhoon, astronaut Samantha Cristoforetti said in a tweet: "Commands respect even from #space: we just flew over typhoon #Maysak."

Believe it or not, what we see in these photos is only a glimpse of the magnitude of the storm. Looking at the Earth's surface, the typhoon is a noticeable blemish.

You can almost see the storm spinning even in a still photo.

The intensity of the storm is visible; you can see the wind gusts meeting the water. It's beautiful, but haunting knowing the devastation it's inflicting as it moves throughout the Pacific.

Moving in closer, you can see eye of the storm more clearly. Astronaut Terry Virts tweeted about the Maysak's center: "It seemed like a black hole from a Sci-Fi movie."