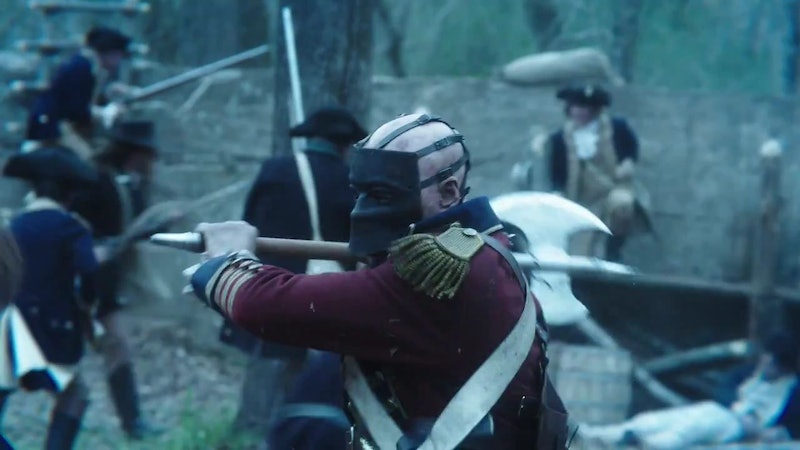 To ask, "Why did no one tell me about this thing/where did this thing come from?!" feels pointless in an Internet age where a million people are already screaming it at you, so I won't go down that road. Instead I'll offer a statement, and that's "I really enjoyed this show a lot more than I suspected I would, even given the Internet chatter I've digested the last few weeks!" Friends, relatives, homeless people have all been telling me to give Sleepy Hollow, the... I guess we'd call it a "re-imagining," a chance. It is, they'd tell me, a frantic modern take on the old story. "The Headless Horseman fires a SHOTGUN in the first episode. It's insane." "Somehow they manage to tie in not only the Rip Van Winkle story, but the Four Horsemen of the Apocalypse, too." "WITCHES."

This week, baseball pre-empting the schedule, FOX re-ran the Sleepy Hollow pilot. Out of commitment to being on top of the television landscape, I watched. First: If absolutely nothing else, it beats the hell out of watching that self-serious dog turd, The Blacklist. (It's not you, James Spader — you're great!) Second: it's really, really a lot of fun. Let's count the ways, because BuzzFeed:

1) This show is a mash-up dream

Given that the title is Sleepy Hollow, you'd be right to assume that the procedural borrows most of its elements from the Washington Irving short story. But it would have been CRAZY to stop there. Why not throw in the overlong slumber of Rip Van Winkle? And hey — if we've got a Headless Horseman, determined to reclaim his head, who's to say that there aren't three other horsemen, all of whom collectively are slated to destroy the whole of planet earth. And why can't this be a police procedural about weird stuff with some kind of mythology, à la Fringe? Honestly, if Hollow tried to do ONE less thing the whole operation might not worked. But propped up by multiple sources and perspectives, this bugnuts show winds up feeling oddly original.

2) The lighting speed with which this thing moves

Three minutes into the pilot episode, Ichabod has already been buried in a weirdo witch cave and resuscitated in the modern era. Mere minutes after that, police office Clancy Brown has been decapitated. There's no mystery here; no moment to stop and think "omg could that have been the Headless Horseman?" It was DEFINITELY the Headless Horseman, a Revolutionary War-outfitted dude with no head, cauterized that poor dude's neck.

By the end of the episode more than a few people have already died, but a few high-ranking individuals seem to think that Allie and Ichabod may be on the right track...

Remember that 1992 comedy with Brendan Fraser and Sean Astin, in which the former plays a caveman buried in ice who a few SoCal teens need to take care of? Sleepy Hollow hits the same mark. Starbucks jokes which are actually funny! ("That building is also a Starbucks. Is it a law?") Confusion about cars, and cell phones. That time travel sweet spot. No joke, the pilot is just as much fun for the moments where Ichabod is just trying to understand the world around him.

The number one rule about ANYTHING, I've come to realize, is having the ability to make fun of oneself. Kanye West, for all his musical genius? Can't make fun of himself. Will Wheaton (The Big Bang Theory) may not be the finest actor in the land, but he knows how to self-deprecate. Turning jokes around, pre-empting them, and generally having a sense of humor about oneself are the only way we'll survive as a species or series of TV shows. That Sleepy Hollow can make fun of the inherent ridiculous of its situation is, actually, HUGE. The Blacklist could be just as much fun as Sleepy Hollow if it only cracked a goddamn smile now and again!

Those are just a but a few of the reasons you should add Sleepy Hollow to your fall TV rotation. See you next week!