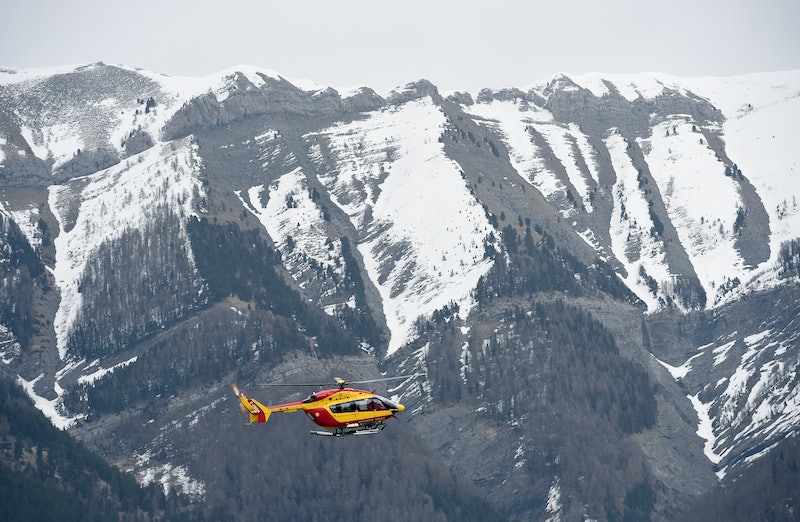 We're starting to get a clearer impression of how Germanwings Flight 9525 crashed into the Alps, thanks to some reported cockpit recorder transcripts from German paper Bild. And while it's unclear if the Germanwings transcript will ever be made fully public, even what's already out there is pretty alarming stuff. Taken in full, what it tells us about the lead-up to co-pilot Andreas Lubitz crashing the plane and killing all 150 people on board adds yet another disturbing layer to the story.

As detailed by the Daily Mail on Sunday, Lubitz urged Captain Patrick Sondenheimer on two different occasions to go use the bathroom, making an apparent effort to be left alone in the cockpit. This ultimately proved pivotal, as Lubitz locked Sondenheimer out of the cockpit when he left, and altered the flight's trajectory directly into a mountain. The allegation that Lubitz repeatedly prodded Sondenheimer to leave the cockpit adds further depth to the basic understanding we've had of this incident for days — that Lubitz crashed the plane deliberately and knowingly.

Lubitz reportedly twice told Sondenheimer that he could go to the bathroom if he needed to, reminding him that he hadn't done so while in Barcelona. Germanwings Flight 9525 had been flying from Barcelona to Dusseldorf, Germany, by way of the French Alps.

At about 10:29 a.m., Sondenheimer finally did so, exiting the cockpit after telling Lubitz, "You can take over now." Within a few minutes, an alarm went off signaling that the plane's altitude was dipping rapidly, and Sondenheimer could be heard banging against the locked door, trying to get back into the cockpit.

While the transcripts may not reveal anything in terms of tone, the implication seems pretty clear — Lubitz was seemingly trying to get Sondenheimer out of the cockpit for a while before succeeding, making it plain that this was somewhat premeditated. As detailed by the New York Daily News, Sondenheimer was said to have banged on the cockpit door upon discovering he'd been locked out, yelling, "Open the damn door!"

It's impossible to say whether this makes the incident any more distressing — even without any evidence of malicious preplanning, with 150 people dead, there's not a trace of comforting information to be found — but, suffice to say, this is the fullest picture we've had since the plane went down. And it could easily remain so, assuming that the alleged mobile phone video of the crash (which French prosecutors have denied even exists) remains out of the public view.