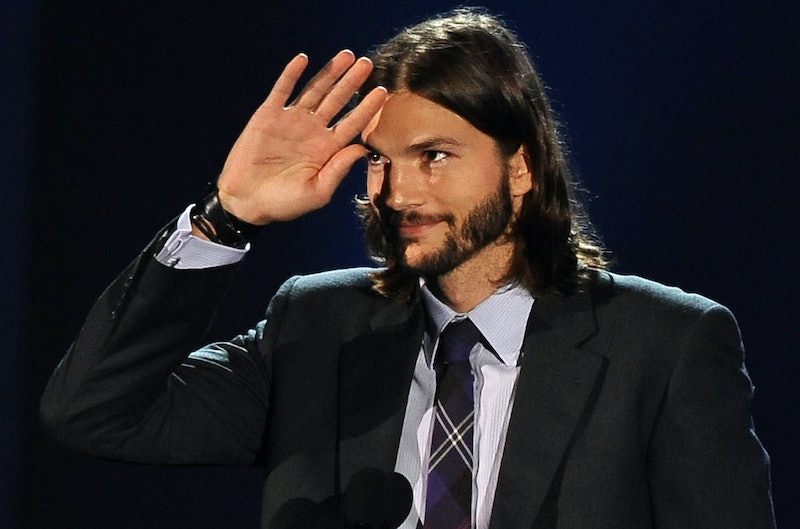 Before Ashton Kutcher became a dad, before he was lucky enough to marry Mila Kunis, before he was, for some reason, on Two And A Half Men, but after he was Kelso, he was pranking all of his celebrity friends on MTV's Punk'd. Why? Because he had the means and he just felt like it, that's why. On Wednesday, for April Fool's Day, the 37-year-old Kutcher threw back to his Punk'd days with a joke on his website. He baited everyone into thinking that Kutcher would call his fans if they clicked a link at the bottom of his website, aplus.com: "Those who go to answer the faux ring on Wednesday are getting directed to a screen that shows the actor pointing and laughing at them with the message, 'April Fools. Trick Your Friends.'"

OK, that's cute and all, but it's pretty lame compared to the life-ruining (well, almost) pranks he played on Punk'd. It's like a dad-joke version of the show. The show ran for five seasons starting in 2003, and Kutcher didn't discriminate about who he freaked the hell out in Hollywood. Most were good sports, but a lot of famous friends — including Kanye West — did not seem so pleased with what went down on the hidden-camera show.

If you grew up watching Punk'd, there's no way you don't remember Justin Timberlake scared as hell when he thinks the IRS is after him. Here are Kutcher's six best pranks from his Punk'd glory days:

Dax Shepard plays an agent that comes to seize Justin Timberlake's property, including his house and his guitars (which they smash). Baby JT was on the very first episode of the show and looks like he's about to burst into tears. Amazing.

Sweet Queen Bey is at a Christmas charity event for young, adorable students, to place the star on top of the huge Christmas tree. Except it crashes to the ground, and the kids scream at Beyonce, "YOU RUINED CHRISTMAS." Pretty brutal.

Kutcher screws with Kanye while he's on the set filming his music video for Jesus Walks, sending in fake reps from the LA Film Commission who say the filming of "Jesus Walks" on a Sunday is sacrilegious. Kanye gets MAD.

Kutcher LOVED to mess with his former co-stars from That 70's Show, including Laura Prepon. He pranks her at a restaurant by making her think her friend, the waiter, got fired. She gets indignant, insisting that she isn't trying to scam the restaurant by looking for a free meal. "Give me a break," she says, which is a GREAT line. She also calls Kutcher an asshole, which is satisfying.

Kutcher and MTV briefly brought the show back in 2012, and they gave Champagne Papi some more woes when they made him think the Secret Service was picking him up to meet Uncle Joe Biden. Then there's an earthquake in the parking garage. Drake, in true Drake fashion, is quite emotional.

Very, very unfortunately, there's no video of the full episode where Kutcher pranks a babyfaced Mila Kunis who's just trying to help a little girl. However, there's this super-cute video of them hugging after Kutcher pops out to tell her she was fooled. She's so tiny and so mad! Ugh, they are adorable. Thank god they ended up together.

More like this
All The Celebrity Relatives Revealed On 'Claim To Fame' So Far
By Brad Witter
Netflix Reveals First Look At Wednesday In The 'Addams Family' Spinoff Series
By Bustle Editors
Who Plays Trent In 'Never Have I Ever'? Benjamin Norris Calls His Character A “Himbo Stoner”
By Grace Wehniainen and Radhika Menon
Who Is Tatiana Maslany Dating? The 'She-Hulk' Star Is Married To 'A Locke & Key' Actor
By Radhika Menon
Get Even More From Bustle — Sign Up For The Newsletter