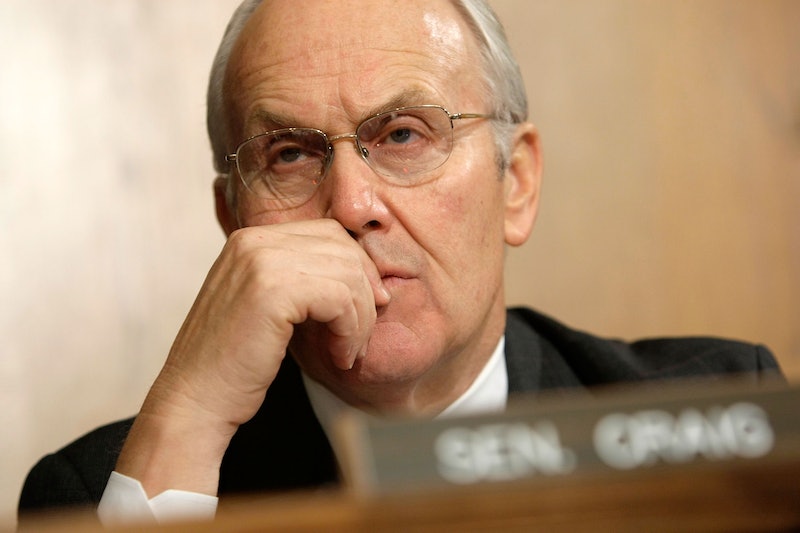 Ever sit back and wonder "Hey, what happened to that guy?" When a big news story breaks and combusts quickly, you can be left wanting to know how it unfolded in the years afterwards. And when it comes to Republican scandals of the last decade, few provided drama, and tumult and amusement in the equal measures like a certain former Idaho Senator's did. Do you know who I'm getting at? Well, his picture is above, so I guess I spoiled it already: Whatever happened to Senator Larry Craig?

If you were too young to be following the political news that closely, or you just missed it, the scandal that effectively ended Craig's political career was strange and suggestive in the extreme. Basically, it all came down to two men, using adjacent stalls a public restroom at the Minneapolis-St. Paul International Airport in 2007.

One of those men was Craig, at the time a three-term Republican Senator with a history of support for anti-gay policies — he voted in favor of the military's odious Don't Ask, Don't Tell policy back in 1993 (as did many Democrats, it bears mentioning), opposed same-sex marriage, domestic partnership benefits, and didn't want hate crimes laws to cover sexual orientation. The other man was a plainclothes cop. Can you guess where this is going?

So, What Happened In That Airport Bathroom?

Basically, as alleged by the police officer (and pleaded guilty to by Craig before he desperately tried to retract it), the oh-so-anti-gay Senator attempted to solicit gay sex in the airport bathroom. Here's how CNN reported it at the time:

According to the arrest report cited by Roll Call, Craig tapped his right foot, which the officer said he recognized "as a signal used by persons wishing to engage in lewd conduct."

The report alleges Craig then touched the officer's foot with his foot and the senator "proceeded to swipe his hand under the stall divider several times," according to Roll Call.

What reportedly happened next had to be a horrifying moment for Craig — the cop flashed his badge under the stall divider, and told him he was under arrest.

How Did Craig Respond?

Honestly, it's hard not to feel bad for Craig. But soliciting sex in a public restroom is a definite no-no in the legal sense, and the gay angle becomes pretty glaring when the culprit is a stridently anti-gay Senator in his public life. After being arrested, Craig pleaded guilty to misdemeanor disorderly conduct, then didn't tell anybody about it. It wasn't even discovered until Roll Call broke the story a month later, which forced Craig into a profoundly awkward denial, with his wife at his side.

Thank you all very much for coming out today. I will read a statement. First, please let me apologize to my family, friends and staff, and my fellow Idahoans for the cloud placed over Idaho. I did nothing wrong at the Minneapolis airport. I did nothing wrong and I regret the decision to plead guilty and the sadness that decision has brought on my wife, my family, friends, staff, and fellow Idahoans, and for that I apologize. In June, I overreacted and made a poor decision. ... Let me be clear: I am not gay, I never have been gay.

In his post-arrest interview with the officer, Craig claimed that his foot may have made contact with the officer's because he was "a pretty wide guy," a comment that earned him a slightly different, damn-near branded nickname: Larry "Wide Stance" Craig.

What Happened To Him?

Well, at first he said that he'd resign, but just days later his staff indicated he was reconsidering. Ultimately, he stuck it out for the entire remainder of his term, and good for him! It's his constitutional right. But after he left office in January 2009, his political career was widely viewed as well and truly over — he's now 69, and figures to have no future in major party politics.

A 2007 Law & Order plot was seemingly inspired by Craig, featuring a councilman tapping his foot in a public restroom. In 2011, CNN's Dana Bash ran into him in the Capitol and reported that Craig is now working as a lobbyist and seems "cheerful."

That's not to say there aren't some lingering issues. In September 2014, a federal judge ruled that Craig had to pay a hefty $242,000 fine for misuse of campaign funds. As it turns out, needing cash while trying to get his guilty plea reversed — a pretty desperate gambit, considering the guilty plea itself really wasn't the thing about the story that was driving the news cycle — he dipped into his campaign coffers to foot some legal costs.

In other words, at basically every step of the way since that day at the airport bathroom, Craig played things wrong. He didn't request counsel before being interviewed by the police, he tried not telling anyone he'd been arrested, he pleaded guilty then tried to reverse it, he said he'd resign then did reverse it, and, finally, he misspent campaign money to try to retract his plea, costing himself hundreds of thousands of dollars.