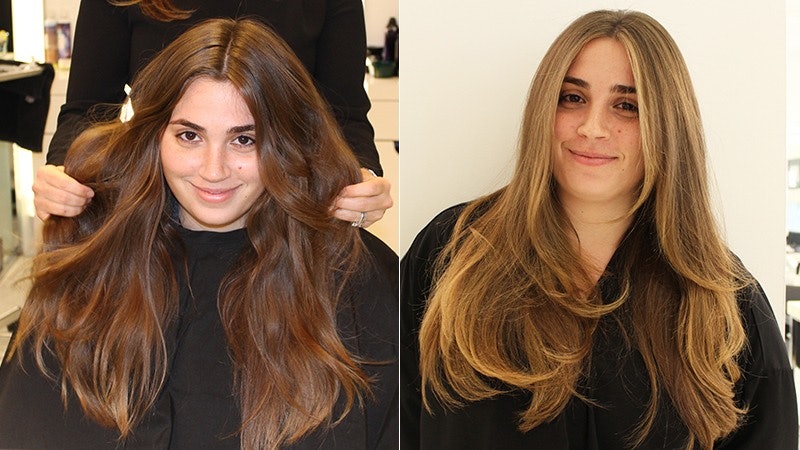 Oh, how the ombré keeps evolving. If you haven't heard by now, the 2014 ombre has totally been replaced this year by the ecaille tortoiseshell, which is a lot like the ombré, but is way more natural-looking. IMHO, it is totes perfect for 2015's popular minimalist fashion and beauty looks. I have to admit, I just found out about this new spin on the old ombré recently, and after talking with multiple stylists, it seems that it's not entirely known by everyone yet either. So I suggest you be the first of your girlfriends to try this out before everyone else does.

In case you've never heard of this new hot hair trend, here's what it is exactly: the ecaille technique incorporates more of a natural toned hue of the original color of your hair, using caramelized highlights and darker shades to achieve an ombré look. Not as dramatic as we've seen previous ombrés, like Hilary Duff's mermaid ombré last week, the tortoiseshell ombré is perfect for those who want to update their natural hair color, but still want to keep it looking super chic and glam.

With the seasons changing, I'm starting to feel like I'm obliged to get a new hairstyle. You know, maybe cut off a couple of inches or dye my locks. I just want to find the perfect medium and not go totally platinum blonde like Kim K did for a hot second, but maybe do more of a Jessica Alba ombré bob. For this reason, when I stumbled upon the tortoiseshell ombré, I felt like I had found my solution. I was in love!

But how much does a ecaille tortoiseshell hair dye cost? And is it going to cause a dent in my wallet? I called a couple of salons in major cities and decided to get to the bottom of it. But a heads up, most likely you'll have to go in for a consultation first, depending on what your hair looks like now. They'll want to know how long it is, what color it is, and how thick it is. Also, there's a big chance that they might not know what a tortoiseshell ombré even is, so we recommend to do what celebrity stylist Francesca Montanile advised and "use ombré as a reference point, but ask that they connect the ombré and soften it up."

Even then, they might google it while you're together, but as long as they know what a ombré is, it's easy sailing from there.

After calling multiple salons in LA, they weren't too familiar with the tortoiseshell hair trend, but gave me a base price for their regular ombrés and said if I brought in a picture of what I wanted it to be, it would be no problem:

Similar to LA, most salons were not too sure about the tortoiseshell, but said it wouldn't be a problem. A little pricer in the Big Apple:

Although a little pricey, too, San Francisco salons said they were familiar with the tortoiseshell:

I called the Edit Salon, and the stylist knew exactly what I was talking about. She even mentioned the balyage ombré and said she totes follows all fashion blogs. She was definitely on point. If only I were closer to the Windy City:

By this point after calling multiple salons that really had no idea what I was talking about, I was trying to mention that it was sort of like the balyage ombré to make it easier. These salons also gave me prices of the ombrés they usually do:

For those of you living in Seattle, the tortoiseshell ombré is probably unheard of, but they did say that their colorists would be able to handle it:

More like this
Most Comfortable Underwear For Big Butts
By Audrey Williams
5 Products For Hair Growth That Actually Worked For Me
By Rebecca Strong
PATTERN Beauty Has *Finally* Landed In The UK
By Justine Knight
Your Guide To The Octopus Haircut, The Chic Shag-Mullet Hybrid
By Danielle Sinay and Jordan Murray
Get Even More From Bustle — Sign Up For The Newsletter