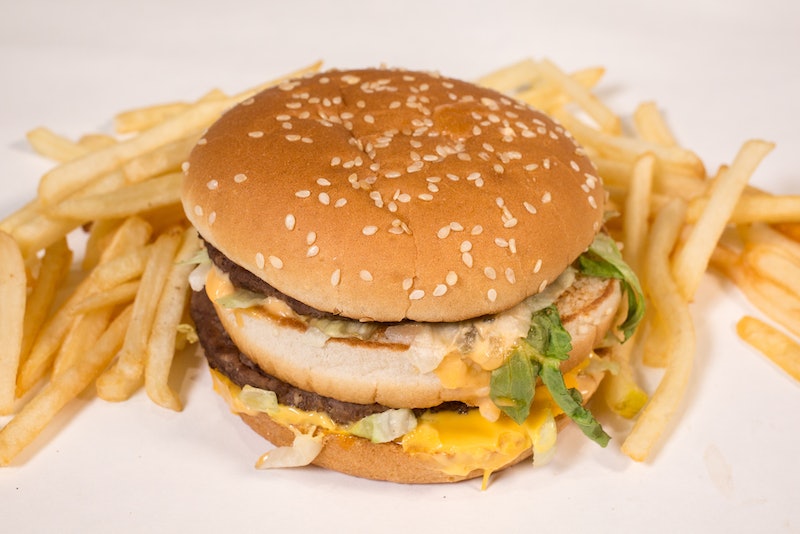 If I told you there was an abandoned floating McDonald's known as "the McBarge" hanging out up in Canada, what would you say? Would you call me crazy? Because I am absolutely not crazy. It really exists, and there's plenty of photographic and videographic proof of it on the Internet. And you guys? It's one of the most fascinating abandoned things I've ever seen — and I've seen a lot of abandoned things.

The McBarge's official name is the Friendship 500. Originally built as part of the 1986 World Exposition on Transportation and Communication (Expo '86, for short), it was intended to show off futuristic architecture and technology. During its time moored in Vancouver's False Creek, it served typical McDonald's fare — burgers, fries, and what have — but it did it with a touch of class. The floors were hardwood, the plants and framed art that decorated the dining room were elegant, and the kitchen was entirely hidden. If the kitchen was out of sight, how did the food make its way to the counter? Via conveyor belt, of course. A little boat known as the Tidy Tug made sure that any wrappers or cups that ended up in the water got picked up before they could do any lasting environmental harm.

Alas, though, the McBarge failed to cut it as a permanent McDonald's location. It has made its home in Burrad Inlet since 1991, where it sits floating amid industrial barges and an oil refinery, looking as sad as it does lonely. But perhaps there is hope for the McBarge: In 2010, it was purchased by developer Howard Meakin, who plans to build a waterfront development featuring it along the Fraser River in Mission, British Columbia. As of 2014, Meakin believed he was close to finally obtaining permission to moor the McBarge in the river; if he's successful, the plan is to turn it into a restaurant and pub.

To be fair, the McBarge's existence isn't exactly a new reveal; it tends to pop up on the Internet ever so often, and this time, we have Boing Boing to thank. An intrepid Redditor also assembled an Imgur album full of shots of the thing a few weeks ago, and Flickr has a few more shots of its exterior. I've assembled the best of the photos here for your perusal, but do feel free to go scour the web for more. There's plenty out there; you just have to look for it.

You know what's really weird, though? The McBarge isn't the only floating McDonald's location to have ever been launched. St. Louis, MO played host to something called the McDonald's Riverboat for some 20 years; it sat beneath the Arch and was, by all accounts, a favorite of both tourists and locals alike. Sadly, though, the McDonald's Riverboat closed in 2000; according to the burger chain, the structure was “in need of extensive renovation, which is financially not justifiable at the present.” Ah well. It was good while it lasted, right?

For the curious, here's what happens when you try to have a cheeseburger on the McBarge today:

More like this
I Tried The $20 TikTok Viral Oishii Strawberries — Here's What I Thought
By Sophie Hanson
Trust Me, Pickle Martinis Are The New It Drink Of The Season
By Emma Carey
Expert-Approved Hacks For Packing A Carry On
By Jessica Goodman
The 12 Best Road Trip Accessories
By Megan Gray
Get Even More From Bustle — Sign Up For The Newsletter