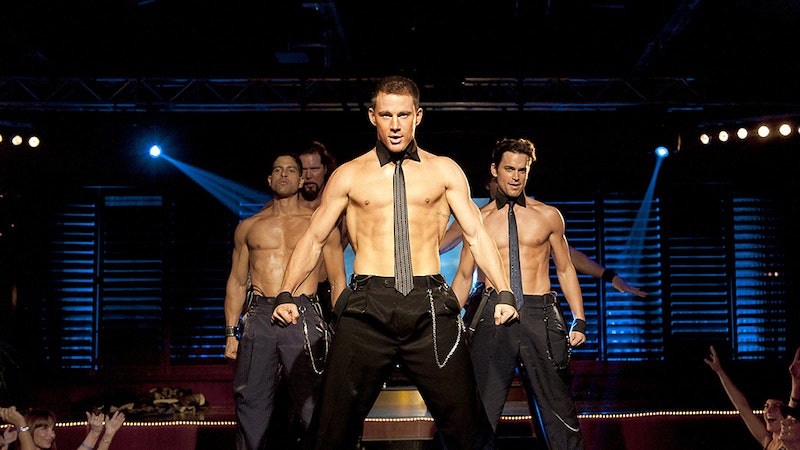 In my life, I’ve been to exactly two strip clubs and two house parties with strippers. And from what I’ve observed —whether it’s brides or couples — how people react to strippers is a good indicator of their future relationship success. Let me explain.My first experience involved a greased, muscular man with a shaved, fake-tanned body. He was not aroused as he gyrated against screaming bridesmaids. I was 21. My two childhood friends were diving off the permanent commitment cliff first. I was in awe. The bride did not want a stripper at her soireé. The party planners didn’t listen. Did they hire a stripper because they thought they had to? Was it scrawled in some bachelorette party code of conduct? In any case, we were enjoying a Wild Turkey mystery punch at a mid-level hotel when a knock at the door sent the bride into a fit. “What did you guys do?” she cried.

Her friends giggled and let the “cop” in. He threw down a boom box, pushed play on a hip hop cassette, and seductively shed his uniform piece by piece. When he got down to his shiny banana hammock, he began dry humping the bride, who protested from underneath him as he shoved his thinly-covered package in her face.

Their emotionless interaction was gross. Who was this show for? Did her friends pay him to make the bride uncomfortable for their amusement? Half the girls were screaming at a decibel only detectable to small, yappy dogs. I sat quietly eyeballing an “older” woman in her late 20s, who gave me knowing looks. She was about six months pregnant.

She and I made a beeline for the stairs when it was clear the stripper was gunning for us. We locked ourselves in the upstairs bathroom. Soon, the stripper knocked.“Are you okay?” he asked.“Yep, we’re fine!” “Are you sure?” He sounded genuinely concerned and invited us back to the party. We declined. Later, when the show was over, I reluctantly agreed to put my arm around him for a photo next to the fireplace, as if for a slightly f*cked-up Christmas card.When he left, the bride immediately called her fiancé to provide a play-by-play. We were wide-eyed over her honesty. Her future husband was mildly disturbed, but not angry with her. They were, after all, best friends. They’re going to make it, I thought. If the first thing she wanted to do after simulated sex with a stranger was call her fiancé to over-share, they were going to last. Sure enough, they’re still together.

The following year, I traveled to Vegas for a bachelorette party for my future aunt. My best friend Vanessa joined me. The bride started drinking Coors Light Friday afternoon ... and didn’t stop until Sunday evening. Saturday, we landed in a strip club dubbed “The OG.”

We were escorted through the front room, where men ogled glittery, topless women with fake breasts. I walked quickly, trying not to stare. The back room was filled with maniacal females squealing over male strippers. On stage, an oily, muscle-bound, hairless man in a thong cavorted like the guy at the hotel. What committee decided this is the exact look that turns women on? I wondered. Other similarly clad, flaccid clones later performed Village People-esque dances, dressed as cowboys, cops, and "Indians". I didn’t understand the allure. They pulled brides center-stage to sit on a chair. My aunt threw herself onto that chair. A photo later circulated of her in the hot seat with her arms up, a wide smile, her long red hair extra frizzy. A stripper was stretched perpendicular across her lap, simulating sex.

I chalked up the bride’s Vegas behavior as “one last hurrah,” but I was concerned. She was a 26-year-old party girl singlehandedly sustaining the Coors family. Her marriage lasted about two years. I wasn’t shocked, but I was sad. I only saw the OG blackmail photos once. They were tucked away in her best friend’s underwear drawer.

My third stripper encounter was more positive. Another “cop” showed up to a friend’s bachelorette party, but this time, the bride was expecting him. So was her fiancé, who was accommodating. He timed the stripper’s arrival with a trip for ice cream with their young son. What a guy. This is what I should aim for, I told myself.

This stripper was a “boy next door” with blond hair and lean muscles that didn’t scream steroids. He wasn’t slathered in oil, and he didn’t spend his set performing fake sexual acts on everyone. He prepared semi-innocent games instead. I participated this time. Who was I to say no to body shots off his scrumptious abs? He also talked to us like a normal person. The women squealed this time too — especially the married ones.

The bride enjoyed herself, but in an innocuous way. In the end, that marriage lasted nine loving years, until the husband sadly passed away.

You should want to call your fiancé during your bachelorette party because he’s your best friend. You should want to take your son for ice cream, so your future wife can have a good time with her girlfriends. You shouldn’t hide the Vegas photos in your girlfriend’s underwear drawer, or hoard your fun for when your wife’s in the restroom. Love shouldn’t be that sneaky or complicated.

My fourth stripper experience occurred when I moved to Atlanta in my early 30s. This time, it involved fully naked women. At a birthday party for a female friend, she randomly yelled, “Let’s go to a strip club!” for no reason.

A handful of couples piled into an SUV. At Mardi Gras, I sat below a stage, staring up at a woman who faced the other direction, bent over, her legs straight and spread wide. Everything her gynecologist sees was six feet from my face, and well lit. I could practically see her uterus. I didn’t know whether to be embarrassed or applaud her. It was both intriguing and appalling.

The women there didn’t have quite the same polish as the ones in Vegas. They could have been a random sampling of the imperfect women in any city with varying skin colors. Some were emaciated; others shook their ample cellulite. Some were old in stripper years, and some even had real boobs. All of them projected “sexy.”

As I’d done in Vegas, I watched as if performing a social science experiment. Every time the birthday girl went to the restroom, her husband scurried to the stage to donate fives to a gorgeous stripper with long blonde hair and model looks. He shoved money at her and then ran back to his seat before his wife returned.

“Why doesn’t he just do that when she’s not in the bathroom?” I asked his best friend. After all, the strip club was her idea.

You can come to a strip club, but you’re not allowed to do what strip club patrons do? I thought.To me, her jealousy seemed unnecessary; she was a lovely brunette with a cute figure. They had children and a stately house. They seemed happy. They have since gotten divorced after nearly 20 years. The news shocked me, despite the trust issues I saw in the club.I've noticed that enduring couples tend to have a high level of openness, a “nothing to hide” sensibility. You should want to call your fiancé during your bachelorette party because he’s your best friend. You should want to take your son for ice cream, so your future wife can have a good time with her girlfriends. You shouldn’t hide the Vegas photos in your girlfriend’s underwear drawer, or hoard your fun for when your wife’s in the restroom. Love shouldn’t be that sneaky or complicated. In the end, when I had my own bachelorette party, we just went to a comedy club. My bridesmaids weren’t tempted to hire a stripper in the name of peculiar traditions. And that was just fine with me.

More like this
How To Politely Reject Someone Who Keeps Asking You Out
By Laken Howard and Lexi Inks
10 Ways To Be More Empathetic To Your Partner
By Raven Ishak and Lexi Inks
Think Your Partner Is Cheating? These Tarot Cards May Confirm Your Suspicions
By Kristine Fellizar
Why A Libra & Libra Couple Might Become Codependent
By Kristine Fellizar
Get Even More From Bustle — Sign Up For The Newsletter