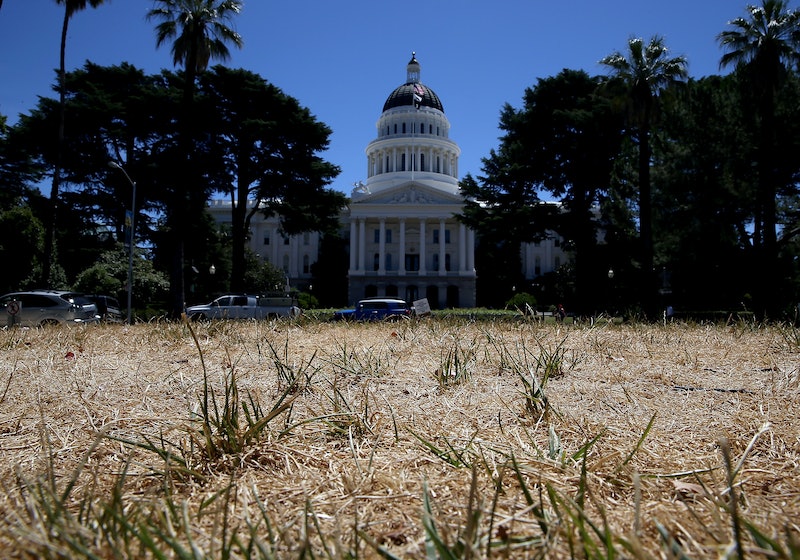 For the first time in the state's history, on Wednesday California Gov. Jerry Brown announced mandatory water restrictions to deal with a massive drought, The Los Angeles Times reported. Brown announced the sweeping measures to reduce the state's water consumption by 25 percent, saying the rules were needed because there's no indication how long the dry conditions will persist. Among the provisions of Brown's order: Requirements for golf courses and other large spaces with landscaping to reduce their water usage, a rebate program to upgrade appliances to more water-efficient models, replacing 50 million square feet of lawns across the state, and restrictions on agricultural water uses. In a statement on the governor's website, Brown explained why he had taken such a serious step.

This historic drought demands unprecedented action. Therefore, I'm issuing an executive order mandating substantial water reductions across our state. As Californians, we must pull together and save water in every way possible.

According to the Times, officials have determined that across the Sierra Nevada, the expected snowpack is well below normal, at a time when it should be close to its peak. In fact, it's at its lowest point since record-keeping began in 1950. Besides the environmental impact, there will be serious consequences to violating the water restrictions, Brown said, including fines and cease-and-desist orders, the Times reported.

The specifics of how the water cutback will be accomplished are being left to water agencies, which will likely announce reduction requirements later. But for now, there are plenty of ways to reduce personal water usage (and let's face it, it wouldn't hurt those of us outside California to try to curb the amount of water we waste, too). Besides the obvious not washing your car or watering your lawn, there are other steps everyone can take that might not seem as obvious, and some that are worth repeating, from SaveOurWater.com.

A five-minute shower instead of a 10-minute one can make a huge difference, if you consider that the standard showerhead uses 5 gallons per minute. Here's one that most of us won't love, but which can have a big impact: Turn off the water while washing your hair. It could result in preserving 150 gallons a month. And try to avoid filling the bathtub if you take a bath; most baths use around 70 gallons of water.

You might be surprised how much water you're wasting when you let the tap run while you brush your teeth or shave while standing in front of the bathroom mirror. But there's no need to let all that water go down the drain; just wait until you need to rinse to turn the faucet back on. You'll save about 10 gallons of water daily.

Wash Your Clothes & Dishes Only When The Machine Is Full

Better still, save even more water by getting a more energy-efficient model, which can cut water use by up to 8 gallons for a dishwasher and 16 gallons for a clothes washer. Worth noting: A dishwasher typically uses less water than washing by hand. And you can get most loads of laundry just as clean in cold water, which will also help save energy.

Conserving water isn't exactly fun, but taking small steps can have a big impact, especially in a state in such dire straits as California. Every little bit will help.

More like this
Scotland's First Period Dignity Officer Has Sparked Backlash
By Darshita Goyal
'The Capture' Is Finally Back – & S2 Looks Tense AF
By Sophie McEvoy and El Hunt
The Lionesses Are Calling For Equal Access To Football In Schools
By Sophie McEvoy
25 Things I've Reduced My Life To, In Addition To WFH In My PJs
By Ginny Hogan
Get Even More From Bustle — Sign Up For The Newsletter