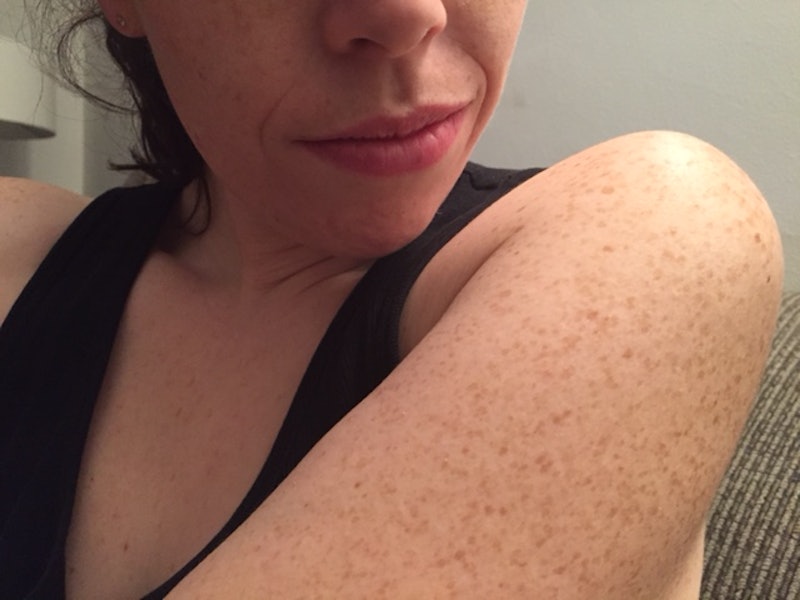 By the time I was in high school, I thought I knew everything about living with my skin issues. I had learned to love my stretch marks, beaten the random rosacea outbreaks, and succumbed to the evil forces of my hormonal period zits. But there was still one unresolved skin issue that I’d been ignoring for years in that laissez-faire, "I'll be fine!" way, as you do when you have a potential health issue that's cheaper to ignore than diagnose: I had tiny bumps on my upper arms, mostly in the back. They’d been there since I was a kid, but I didn’t think anything of them. They didn't itch and weren't spreading, so they were alright by me. I was a late bloomer when it came to touching other people’s upper arms, so I just assumed everyone had arm bumps, and no one ever talked about it because it was so common. Needless to say, not everyone has arm bumps, but a lot of the people that do have these beguiling arm bumps don't know very much about them.

It was in high school when I was finally asked, “What are those bumps on your arms?” The question came from a girl whose face I can still remember but whose name has been purged from my brain like so many traumatizing high school memories. The sleeves of my gym uniform were rolled up, exposing my upper arms — bumps and all. We were outside walking to the track to be tortured for P.E. After years of living blissfully with my bumps, someone had finally called me out on them. "Are you seriously cold right now?"

There were a lot of things I wanted to say. Mostly, "Can you not ask me judgey questions about the unexplained bumps on my body?" But it worried me that I didn't even have the option of acting pretentious and dropping some major arm bump knowledge on my nosey gym acquaintance, because I truly had no clue what the bumps were. Were they permanent goosebumps? Was it a surprisingly mild pox? An allergic reaction? A rash? The result of a hex?

Those tiny bumps on my arms (and possibly yours, too) are called keratosis pilaris (KP). It sounds like an unusual hair care product, but it's actually a harmless skin condition. It's common for people to refer to KP as "chicken skin" or "goose flesh," but I personally think KP sounds a lot cuter and more mysterious while avoiding the polarizing poultry vibe. Basically, if you have KP, you have patches of reddish, bumpy skin on your arms, legs or even butt that resemble acne, but you shouldn't attempt to treat KP using the same methods you would to treat back acne.

Acne and KP may both be annoying skin conditions, but that's where the similarities end. That means you should not under any circumstances attempt to pop your KP. Unlike acne — which can often leave you frustrated wondering why you're breaking out — keratosis pilaris is caused by a build-up of keratin below the surface of the skin that creates those bumps that you see and feel blocking your hair follicles. Skin stuff always sounds so gross when you get technical, doesn't it?

If you're realizing that you have KP, the good news is that most people grow out of it. Mine has gotten better with age. At 24, my KP has improved significantly compared to how it looked when I was younger. I've been fortunate that my little bumps have always blended in with my freckles, but not everyone is so lucky. Like anything else that appears on your skin uninvited, you may not welcome KP with open arms. Luckily, there are a variety of different methods you can try to help fix keratosis pilaris. The key to improving the condition of your bumps is exfoliating and moisturizing. There are a wide variety of homemade remedies out there that treat KP using accessible ingredients like coconut oil, sugar, apple cider vinegar, or essential oils.

According to DERMAdoctor's blog, keratosis pilaris affects nearly 50 percent of the population, so we're not alone in this, fellow arm bump bearers. Chances are, even if you don't have keratosis pilaris, you know at least one person who does. It's not anything to embarrassed about, and it doesn't mean you need to spend more time cleansing your arms. Feel free to blame your parents for your bumps, because keratosis pilaris is something you inherit. It's in your genes, so don't think of KP as some profound hygienic failing on your part. Now that you're a keratosis pilaris expert, you can skip signing up for one of those heavily-dramatized medical mystery TV shows and live life knowing you can confidently answer the question, "What are those bumps on your arms?"

More like this
Is It Actually Bad To Cut Your Cuticles?
By Stephanie Chon and Paris Giles
How Skin Care Experts Are Stepping Up To Support Transgender Patients
By Audrey Noble
Most Comfortable Underwear For Big Butts
By Audrey Williams
This K-Beauty “Wrinkle Bounce” Stick Is Going Viral On TikTok
By Destiny Knight
Get Even More From Bustle — Sign Up For The Newsletter