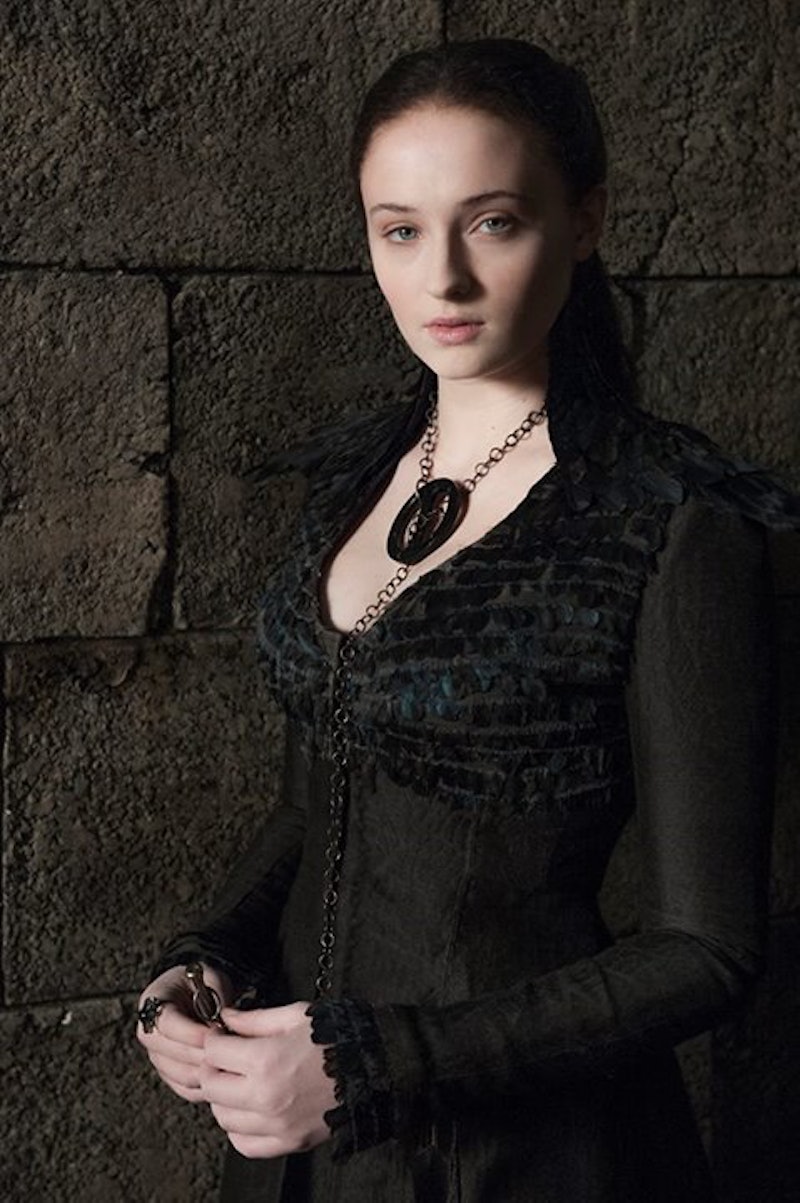 Maybe George R.R. Martin purposely isn't as prolific as we would love him to be, so that when he releases new material we scream with joy. Which is what's happening today. Martin published a The Winds of Winter chapter excerpt, and to our collective glee, it centers on Sansa Stark, the first chapter from her point of view since back in 2005 with A Feast for Crows.

Perhaps because Sansa's storyline in the (how can I say immense more immensely?) popular HBO series Game of Thrones will be deviating from Martin's original story from the novels, Martin wanted to make sure his two cents for the character was known in time for the show's return. (Which, for everyone counting down at home is on April 12.) If you remember, in the story now Sansa is being referred to as "Alayne Stone," so that she can travel under the disguise of Lord Petyr Baelish's (aka Littlefinger) bastard daughter. The Starks, you know, are a diminishing, but wanted family, especially since Sansa escaped King's Landing with Baelish's help after her marriage to Tyrion Lannister. (I'd be totally cool married to Tyrion, but you know, to each her own.)

In the Winds of Winter excerpt scene, Sansa, or "Alayne," is with Mya Stone, the Robert Baratheon's bastard daughter and a companion of Sansa's, and Lord Robert Arryn, AKA "Sweetrobin," the creepy son of Lysa and the late Robert Arryn.

I know, let's get on with the excerpt. Here's a snippet from Martin's new book preview:

Alayne closed her book. “Thank you, Mya. Let me talk with Lord Robert, if you would.” Relief plain on her face, Mya fled without another word.

“I hate that Harry,” Sweetrobin said when she was gone. “He calls me cousin, but he’s just waiting for me to die so he can take the Eyrie. He thinks I don’t know, but I do.”

“Your lordship should not believe such nonsense,” Alayne said. “I’m sure Ser Harrold loves you well.” And if the gods are good, he will love me too. Her tummy gave a little flutter. “He doesn’t,” Lord Robert insisted. “He wants my father’s castle, that’s all, so he pretends.” The boy clutched the blanket to his pimply chest. “I don’t want you to marry him, Alayne. I am the Lord of the Eyrie, and I forbid it.” He sounded as if he were about to cry. “You should marry me instead. We could sleep in the same bed every night, and you could read me stories.”

No man can wed me so long as my dwarf husband still lives somewhere in this world. Queen Cersei had collected the head of a dozen dwarfs, Petyr claimed, but none were Tyrion’s. “Sweetrobin, you must not say such things. You are the Lord of the Eyrie and Defender of the Vale, and you must wed a highborn lady and father a son to sit in the High Hall of House Arryn after you are gone.”

You are such a little fool.