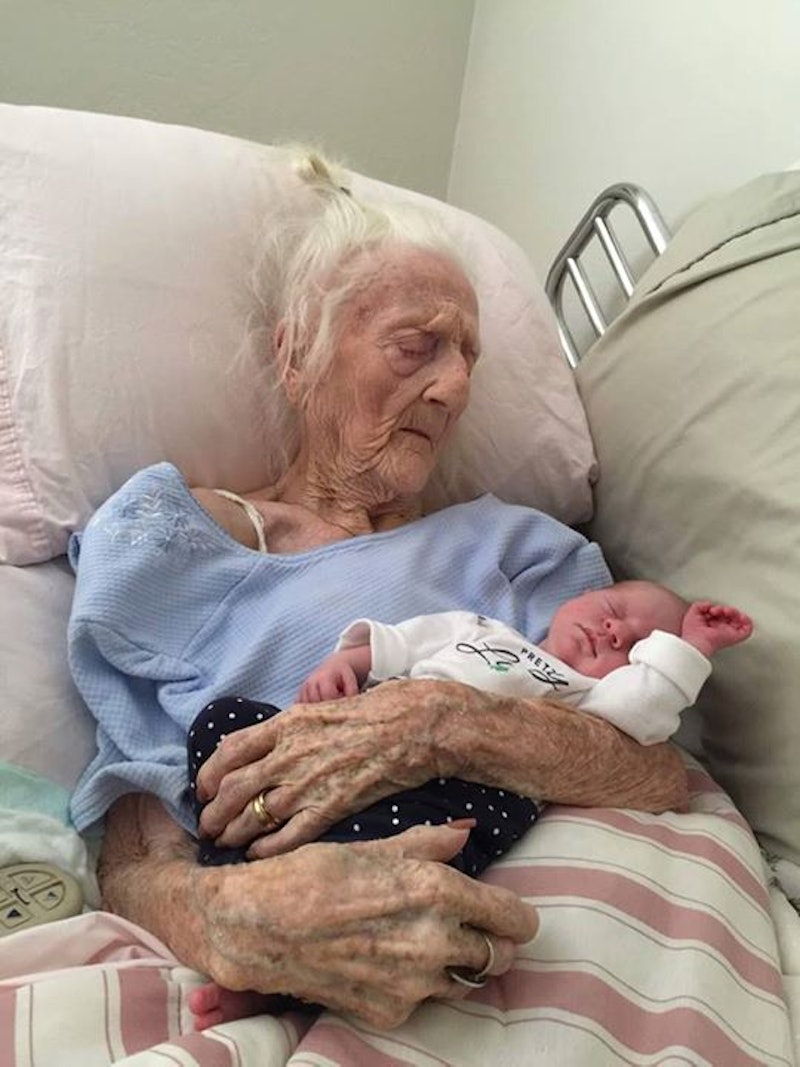 When Sarah Hamm posted a picture of her 101-year-old grandmother Rosa Camfield meeting her great-granddaughter, there's no way she could have predicted it receiving millions of likes and shares online, but that's exactly what happened. Hamm brought her two-week-old baby to meet Camfield just days before the centenarian passed away, creating an opportunity for a multigenerational photo that quickly went viral after being shared on the popular social network Life of Dad. In fact, the 101-year age gap inspired others to share their own, similar photos, Bored Panda reports, including one that claims a 112-year age difference. One hundred. And. Twelve. You know, I was feeling old earlier this week after I found myself sympathizing with Sebastian in a recent viewing of The Little Mermaid, but I suddenly feel much better.What is it about the photo that prompted such a wide response on social media? (It's currently at a whopping 2.5 million likes and almost 80,000 shares on Facebook.) According to Life of Dad co-founder Tom Riles, it's all about the circle of life. "To think that they grew up in entirely different worlds... yet [the older generation's] influence, values, and love will pass on through them and others to come is simply amazing," he told the Huffington Post. Patrick Quinn, also a co-founder of Life of Dad, said that he is in "complete shock" at the post's popularity. "I thought a few of our fans would feel connected to it as I did," he told ABC 7. "It was clear that I had underestimated the impact it would have."

Unfortunately, Camfield wasn't able to enjoy her time in the spotlight for long. Her granddaughter posted the photo on St. Patrick's Day, and according to the Huffington Post, Camfield passed away on March 30th. Hamm, however, says her grandmother would have been pleased to know of the effect her photo had on others.

"She would probably yell at me for taking a bad picture of her," Hamm told ABC 7. "But no, she would probably say it melts her heart."To see the heartwarming multigenerational photos being shared in response, take a look at the comments on Life of Dad's Facebook post. Now, if you'll excuse me, I have a grandmother to call.