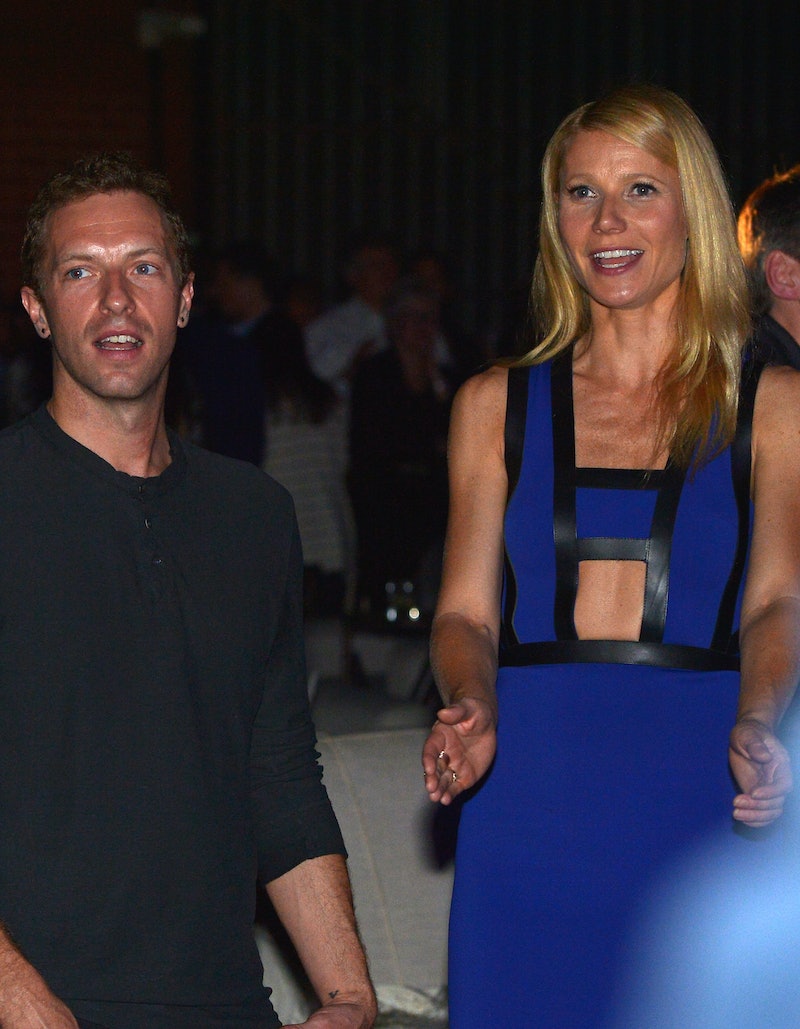 When it comes to getting a divorce and remaining civil, Gwyneth Paltrow and Chris Martin definitely deserve a round of applause. I mean, I've never been through a divorce myself, but I think it's safe to say that it's never a good situation for anyone involved — especially when you and your spouse are in a high-profile marriage like these two. When they first announced they were splitting up in 2014, I was heartbroken. If they can't make it work, who can? But in the past year, they've proven that it is possible to be friends with your ex after your divorce, and they've done so very gracefully. So gracefully, in fact, that they still travel together. Paltrow and Martin are on vacation together, and apparently, it's to celebrate their one year divorce-aversary.

Of course, they haven't confirmed that they're celebrating their divorce — and even though they announced it this time last year, we have no idea when their split actually happened. However, they are on vacation with their kids, and they seem to be having fun. According to Page Six, as of April 2 the Paltrow-Martin family was enjoying the sun in Puerto Vallarta, Mexico, with both Apple and Moses in tow and doing the best job ever keeping their children's family life in tact even after their divorce.

This isn't the first time that Paltrow and Martin have kicked ass at this whole divorce thing. Over the past year, they've become living proof that an amicable divorce is an actual, real thing.

They don't even call it a divorce

From the beginning, I had a feeling Paltrow and Martin's split wasn't going to be like any other, mostly because to them, it wasn't a divorce — it was a "conscious uncoupling." Mock Paltrow for that as much as you want, but I think it's nice that she saw it as an opportunity to build a different relationship with someone who'd been so important to her instead of throwing their entire history away.

Even though it can't be easy to be BFFs with your ex, for the sake of their children, Martin and Paltrow found it necessary to strike up a friendship even though the romantic feelings between them no longer existed. While talking to Howard Stern earlier in 2015, Paltrow said:

"The idea is you try to do it with minimal acrimony and you say, "Look, we have kids, we’re always going to be a family and let’s try to find all the positives in our relationship, all the things that brought us together, the friendship." We actually have a really strong friendship and we laugh and we have fun.

They support each other in their new relationships.

The jury is still out on whether or not Martin and Jennifer Lawrence actually are or aren't or were ever a thing, but should Martin decide to begin a relationship with someone new, Paltrow is on board.

"I respect him as the father of my children and it’s his life and it’s his decision," Paltrow told Stern in the same interview. "And I do think he loves the kids so much and I don’t think he’d be with someone who wasn’t great. And if I’m wrong, I’ll come back here and tell you."

They spent Valentine's Day together

This might be the most out there, but it's really kind of sweet. In February, Martin and Paltrow celebrated the official day of love with Moses and Apple by taking a walk on the beach and even looked like they were enjoying each other's company. I'd definitely say this was more for the kids than anything else, but isn't that the best reason?

More like this
Brad Pitt’s Recent Dating History Includes A German Model
By Brad Witter
Who Is Camila Cabello Dating? She's Getting Cozy With Lox Club CEO Austin Kevitch
By Radhika Menon
Nicola Walker’s IRL Husband Is No Stranger To TV Screens
By Darshita Goyal
Laura Tott From 'First Dates' Married Her Long-Term Mystery Boyfriend
By Darshita Goyal
Get Even More From Bustle — Sign Up For The Newsletter