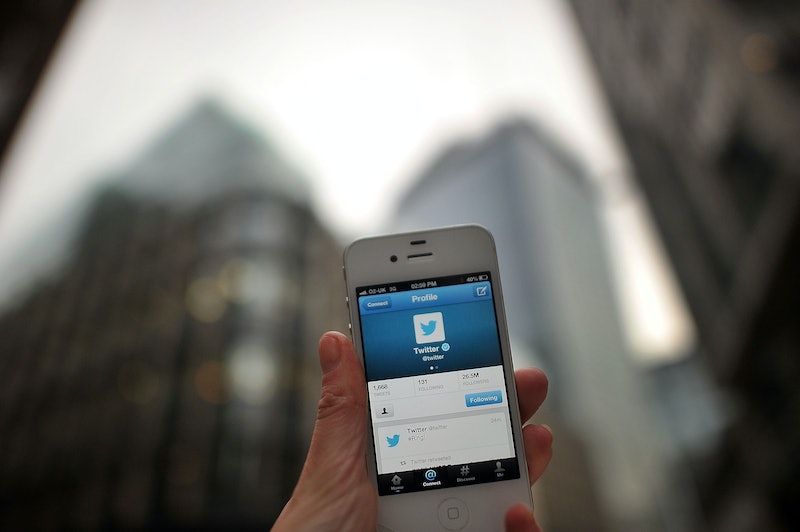 Periscope, Twitter's new live video streaming platform, launched just a week ago but is already seeing an onslaught of sexual harassment against women. Can we officially declare a new law of the internet? "Put anything online and the creeps will come." At least, that seems like how it works these days. It's exactly what's happening with Periscope. As a writer for the Internet and a Twitter user, I'm no stranger to sexually aggressive commenters. From "admirers" to horrible trolls, gendered @ responses and Tweets range from the innocuous "you're hot" to the threatening "get raped" and far worse. Being a woman on the Internet is tough, mostly because, like being a woman anywhere, the simple fact that you are present seems to be a tacit approval of entitling men to sexually abuse you. Fun!

Cosmopolitan's Emma Barker calls Periscope "the new Chatroulette" even though Twitter never intended for it to have a primarily sexually voyueristic purpose. This, as I'm sure you guessed, is why we can't have nice things. Barker writes of her friend's experience with the app:

"[She] decided to test it out by just streaming a conversation she and her roommate were having. The two sat on a couch, fully clothed, talking about nothing really. A blur of male-sounding screen names flashed along the bottom of the screen, showing the people joining the stream. Within the first 20 seconds the first comment popped up. "Show butt."

That was immediately followed by a plethora of "Hi"s and "Age?"s and "Show ??"s. Then another "Show butt" and an "Age ??" "I would soooo swipe right on both!!!!!" one enthusiastic user commented. "Do you get out of the shower to pee?" commented another."

These comments all came despite the stream not being sexual in any way whatsoever. The sexual nature of the comments was never invited, or even impliedly invited. Internet Dutch courage is a strange thing indeed: Who would walk up to a stranger on the street and say such things? And why don't we have the same recourse to justice online as we would if the same thing did happen to us in the street? Emily spoke to a representative of Twitter and learned that,

"The app's policies prohibit "pornographic or overtly sexual content," "explicitly graphic content or media that is intended to incite violent, illegal or dangerous activities," and further states, "Respect one another. Do not abuse, harass or post others' private, confidential information." Users can report and block other users, and Periscope can remove content and terminate accounts."

But as we know, it's nearly impossible to erase sexual harassment online. If you delete one troll, six more will come to its funeral. Actually, I hate even calling these people trolls — they are people. They are not some other creature, subject to different standards of conduct and decency, and giving them a label like "troll" gives them nothing but something to hide behind, like, "Welp, I'm a troll, what do you want from me?" They are human people, with all the capacity for respectful behavior that any of us has. Anyway, as someone who's experienced harassment on Twitter, I can tell you on no uncertain terms that there isn't a hell of a lot you can do about it. Even reporting someone for threatening to rape you will not get them deleted. So, with that in mind, it's hard to imagine that having someone ask to see your butt would be seen as an infringement by the powers that be.

Emily's friend and her roommate received a lot of disgusting comments, and I'm sure there are many women who experience online sexual harassment every day. Here are some tips for dealing with it:

Whatever platform you're on, report it. Nothing might come of your report but at least there will be a record of your complaint.

Take screenshots of every harassment that comes your way. You're building evidence...

I once had a Twitter user who was harassing me so intensely that I wound up finding him on Facebook. His About section showed his current workplace, so I emailed him all the screenshots (your evidence!) that I'd taken of his Twitter comments (made during work hours), and told him if I ever heard from him again, I'd be in contact with his boss. The troll apologized to me, and left me alone. Twitter might not have your back like they should, but you can damn sure have your own.

My immediate reaction these days is to immediately block anyone nasty (not critical, but nasty or threatening — there's a difference), because, at the end of the day, we don't have to tolerate bullying. And even though bullies have the power to comment, we have the power to block, delete, ignore.