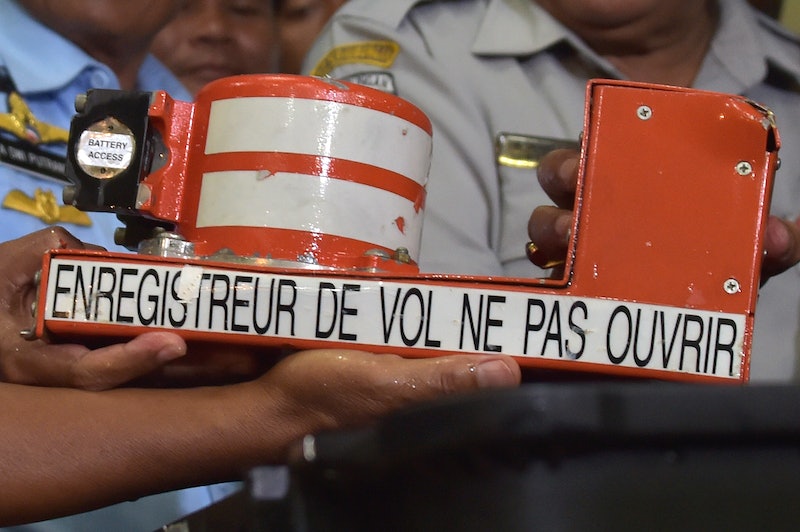 As the recovery efforts and investigation into downed Germanwings Flight 4U 9525 continue, search crews have discovered the second black box from the plane. The first black box, found last week, revealed crucial information about what happened in the final moments of the flight, with the captain trying desperately to get back inside the cockpit. The second and final black box could also reveal helpful clues as to what really occurred when the plane crashed into the French Alps last week, but exactly what will this black box contain?

The two black boxes found at the crash site, although referred to by the same name, serve completely different functions. In fact, the name "black box" is a little misleading, considering the devices are actually bright orange and not perfect rectangles. Nevertheless, they are both vital to crash investigations and were created purely for this purpose.

The first black box found from Germanwings Flight 4U 9525 was the cockpit voice recorder. Investigators have already used the audio recordings to determine that co-pilot Andreas Lubitz took control of the plane when the captain went to the bathroom and wouldn't allow the captain to reenter.

Although the crew's comments were extremely helpful in piecing together the Germanwings crash, the black boxes are generally meant to record other noises in the cockpit, like engine noise, stall warnings, or emergency pings, according to National Geographic. Investigators can use these seemingly small noises to determine important information about the flight's trajectory.

A flight's second black box, like the one just found by the Germanwings search crew, records flight data, such as time, altitude, airspeed, and direction. Today's data recorders are extremely advanced and can measure much smaller figures like auto-pilot and the movement of the individual flaps on a plane's wings. Of the two black boxes, the data recorder is more helpful in determining the specific causes of a crash and can be used to create video reconstructions of the flight's movements, but does not contain any audio recordings of the crew.

These powerful boxes are usually housed in the tail of a plane, to protect them when a plane crashes nose first, but they're pretty indestructible regardless. Black boxes, with memory boards inside that store the data, are wrapped in aluminum, high-temperature insulation, and then corrosion-resistant stainless steel or titanium, the National Transportation and Safety Board told NPR. They can survive an impact velocity of 310 mph and up to an hour in flames of 2,000 degrees Fahrenheit, and can still emit a signal when 20,000 feet underwater for 30 days. If found, a black box is rarely too damaged to read.

With this in mind, the newly found black (or orange) box is expected help investigators further uncover the details behind the Germanwings crash. Knowing exactly what led to the tragedy will hopefully make it less likely to happen in the future.