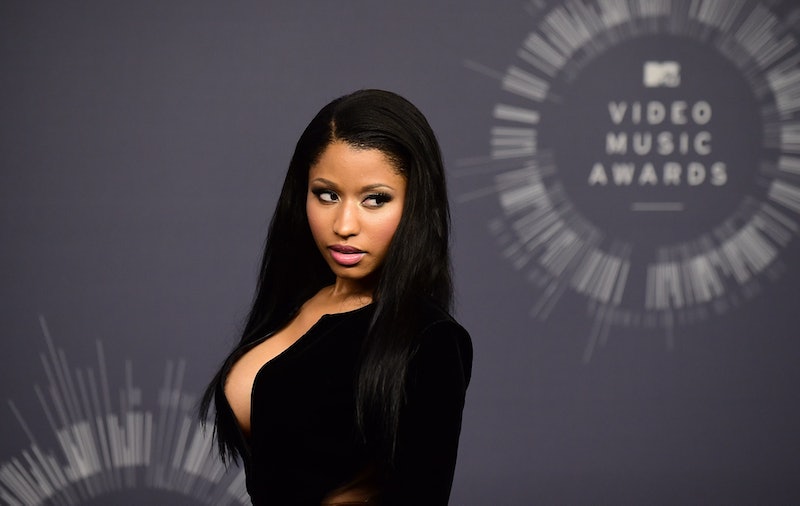 If you're only going to watch one video today, let it be this amazing clip of Nicki Minaj comforting a fan with her boobs. The rapper posted the video on on Thursday and it shows her bringing a young fan up onstage at one of her shows on her European tour. He's in tears and over the moon, saying "I've waited for this moment for so long," and Minaj is so touched that she hugs him and cradles him to her bosom. And he immediately loses the tears and smiles like a little sleaze!

But Minaj was all for it and celebrated the power of her boobs, posting the video to her Instagram with the caption "Get your life from the little boy in this video pls. Look at how he stopped crying wen he laid his head on dem thangz. They have real power beaming out of them that can cure the sick."

Minaj's social media flow is always on point, and she's equal parts hilarious and blunt, using her social media feeds not only to post incredible selfies but also to speak her mind (as she herself advises girls do in one of her videos). Here are six times that Minaj was kickass on social media.

The Power Of "Dem Thangz"

I mean, honestly, wouldn't we all have the same reaction as Donny?

When She Was Passionate About Education

Minaj has always been outspoken about how girls should stay in school, and she even wanted to return to her high school to speak, but was turned down for unclear reasons. What a missed opportunity! Minaj is definitely an inspiration for a new generation of girls.

When She Commented On Iggy Azalea

Last summer, Minaj seemingly threw shade at Iggy Azalea when, during her acceptance speech for her BET award, Minaj made a point to mention that she writers and created all of her own songs. Even though she denied this being about Azalea, she came back on Twitter a couple of weeks later saying "Racism is alive and well," followed by "some people have to put in work. others have to cut corners," which is a subtweet if I've ever seen one. But which most thought was directed at Iggy's success when she's been accused over and over again of appropriating black culture and using it to get ahead. I appreciate Minaj's candor, because if black female musicians aren't talking about this, who will?

No need to explain.

The cover for her single "Anaconda" was the butt seen round the world, and a lot of photoshops resulted, including of other stars with Minaj's bod. And apparently, Onika loves it.

When She Called Out The Difference Between Black & White Beauty Standards

When she released that now iconic cover for "Anaconda," there was such a quick backlash that it was almost impressive. Many called the cover unacceptable and too raunchy, especially parents who were worried their children would take to Minaj as an inappropriate role model. She wasn't having it, though, and Instagrammed photos of white models showing just as much skin with the captions, "Acceptable," then a picture of her "Anaconda" cover with the caption, "UNACCEPTABLE." She makes a great case about the double standards of white and black beauty.

Thank the lord that Nicki Minaj is as great at social media as she is at looking fly and making music videos.

More like this
Beyoncé & Madonna’s “Break My Soul” Remix Honors A Group Of Black Icons
By Stephanie Topacio Long
Jennifer Coolidge Needs 'Legally Blonde 3' To Happen So She Stops Getting Hot Dog Jokes
By Jake Viswanath
Naomi Osaka & Emma Raducanu’s Experiences Have Inspired A New Amazon Show
By El Hunt
We’ve All Had Bad Sex. Nona Willis Aronowitz Is Talking About It.
By Sophia Benoit
Get Even More From Bustle — Sign Up For The Newsletter