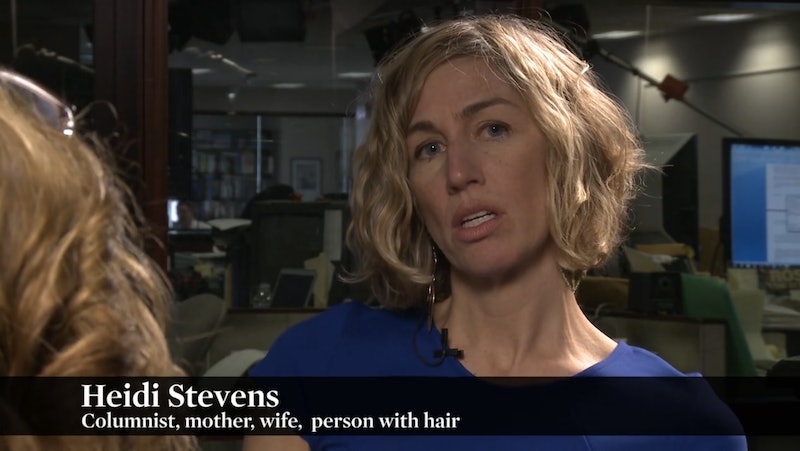 The Chicago Tribune's investigative team released a shocking video report on Wednesday, and it wasn't about crime or politics — it was about a reporter's hair. Lifestyle reporter and columnist Heidi Stevens has received complaints about her hair based on the photo that accompanies her column. The Tribune used the offensive and meaningless debate as the focus of an April Fools' report, but the video actually makes a powerful satirical comment on how women are judged.

Staged as a serious investigative report, with music reminiscent of a murder mystery show playing in the background, "News (not really) in the news: The haircut that divided a nation and shook a newsroom to its core" showcases how ridiculous the attacks on Stevens' hair are. "Hairgate" began March 20 when Stevens published a column detailing some of the comments she receives about her hair titled, "Hate mail lesson: Uncombed hair threatens the natural order." In the column, she says that one woman wrote her, "For heaven sake, comb your hair. Your picture instills not one iota of a knowledgeable person," and another man wrote, "How could anyone take seriously anything written by an author whose accompanying picture makes her look like a tramp, with greasy, matted, uncombed hair?"

Stevens wrote a follow-up column on March 26 saying that the first hair column prompted even more people to weigh in on her wavy locks, from the Cayman Islands to Canada. She wrote, "They flow in by the week, these notes. Each one takes me aback. Not because my hair is above reproach, but because my hair is completely beside the point." Her hair doesn't matter.

As she rightfully points out in the original column, her job is in no way related to haircare or hair styling, so why do people care what her hair looks like? Because she's a woman.

If a woman is placed in the spotlight in any way, even if that only means having one photo accompany her writing, she will undoubtedly be judged by her appearance. Michelle Obama's bangs gained national attention, as did Hillary Clinton's, and any time a woman gives a speech or appears on television, her outfit is meticulously picked apart. The "Hairgate" video might be the best April Fools' joke of all time because it makes a strong feminist statement that a woman's intelligence and self worth are not hinged on her appearance.

Watch the video in full on The Chicago Tribune's website.