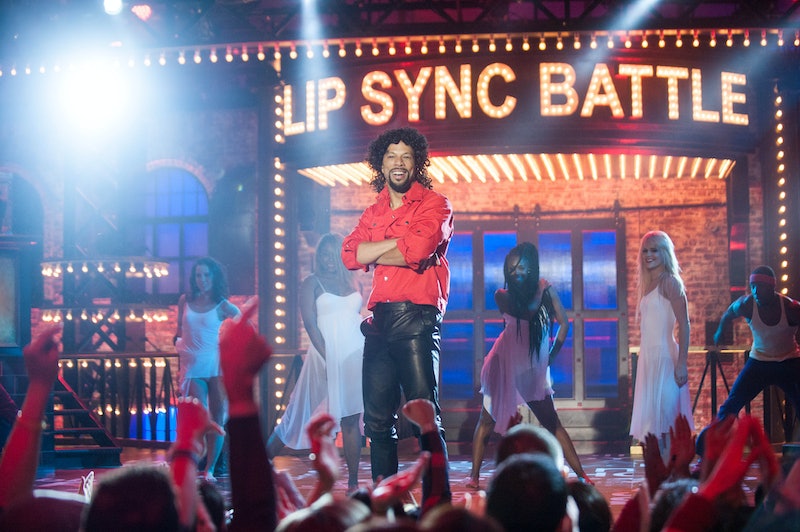 Friends become competitors, and it could not be funnier. On Spike's new series Lip Synch Battle , John Legend and Common competed for the coveted Lip Synch Battle trophy belt in the second episode of the series, and things got heated... and hilarious. The episode began with the series' color commentator Chrissy Teigen to jokingly explain to the audience that the friends could potentially become enemies by the end of the competition. So before we jump into the specifics of this epic battle, how exactly does the game work? Celebrities will take turns lip synching two songs each against each other and compete for a belt which is voted on by audience enthusiasm. Sounds easy enough doesn't it? In fact, it sounds too straight forward and a little boring right? Well with the right celebrity competitors it's kind of perfect, and John Legend and Common were definitely the perfect competitors.

Common began the performances with the classic Jackson 5 song "I Want You Back." With the same hyper dancing and over-enthusiasm as the original group, Common truly lip-synched his heart out with series' host LL Cool J and Legend dancing behind him like backup dancers. It was adorable and totally worthy of a win, especially since Common explained afterward that the Jackson 5 was the first concert he ever saw. But Legend wasn't going to take it sitting down.

Legend took the stage and proclaimed that he was "strictly rapping tonight." And he did not disappoint by providing the audience with an awkward, hilarious and yet somehow still kind of sexy lip-synch rendition of Juvenile's "Slow Motion," complete with very slow butt-slapping hand motions and with a fake teeth grill. The performance was hands down totally memorable and when LL Cool J asked Legend about performing something so different than his normal songs, he repled, "I've been buttoned up too long with R&B... I've never sang about being someone's outside dick before."

To which Common hilariously replied, "I have been someone's outside dick before." Perfect.

What was Common's big comeback you make ask? He came out in full Lionel Richie wig and costume for the artist's classic hit "All Night Long." He had a full performance complete with backup dancers and he even break-danced on the stage!

But Legend wasn't worried. He stated "My last name is Legend, his name is Common. Who do you think is gonna come out on top?" Legend's last song was MC Hammer's "Can't Touch This" but Legend didn't just come out with the lip-synching. He had the full MC Hammer outfit and did the running man to boot.

Unfortunately for Legend, his wife Teigen and the audience weren't on his side as Common took home the belt. But I have to admit, I totally thought this was Legend's belt to win. The performance was completely different than his normal work and it also was the most entertaining thanks to its hilarity. Oh well, he's still John Legend. He really hasn't lost much. This show is awesome.

More like this
Shakira Joked About An Early 2000s Video Of Her First Camera Phone Encounter
By Stephanie Topacio Long
Josh Peck Shows Love To Jennette McCurdy After Her Shocking 'iCarly' Revelations
By Radhika Menon
At 14, D'Arcy Carden Was Sneaking Out To Parties & Crying Over Kurt Cobain
By Ivana Rihter
Lisa Kudrow Explained How Her Body Image Changed While Filming 'Friends'
By Grace Wehniainen
Get Even More From Bustle — Sign Up For The Newsletter