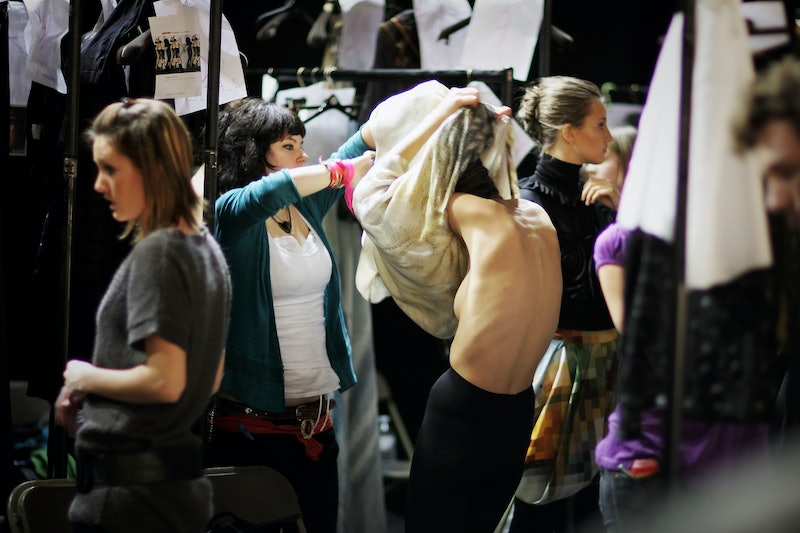 In a move that will hopefully have some impact on the prevailing aesthetic of the fashion industry, French parliament has voted to prohibit super-skinny catwalk models. Paris is the center of an industry in which highly abnormal measurements are the norm, and the new law has already sparked protests from modeling agencies in the capital, according to The Guardian. The law, which bans anyone below a certain body mass index from working on the catwalk, is intended to combat anorexia.

The amendment was passed by France’s lower house of Parliament on Friday, Reuters reports. The measure both bans underweight models and makes modeling agencies and fashion houses that hire them liable to face fines and even prison sentences. This, in a country that boasts a fashion and luxury-goods sector worth tens of billions of euros. The move comes two years after Italy, Spain and Israel adopted laws regulating the body mass index of models used on the catwalk and in advertising campaigns.

Under the new French law, agencies found to employ models below the legitimate body mass count could face fines of up to €75,000 ($81,600), and prison sentences of up to six months.

“The activity of model is banned for any person whose Body Mass Index (BMI) is lower than levels proposed by health authorities and decreed by the ministers of health and labor,” the bill reads. Legislators had previously stipulated that models hoping to be hired must present a medical certificate showing a BMI of at least 18. This equates to, say, a woman weighting 121 pounds at a height of 5' 7". The model would then have to be able to demonstrate that these measures remained the same several weeks after the hire.

Olivier Veran, the Socialist MP and neurologist proposing the amendment, said, “The prospect of such a punishment will have the effect of regulating the entire sector.” Health minister Marisol Touraine had previously stipulated that youthful fashion models should “eat well and look after their health… This is an important message to young women who see these models as an aesthetic example.”

The health ministry estimates that around 40,000 of France’s 66 million people suffer from anorexia. Nine out of 10 of those sufferers are women. In 2007, anorexic former French fashion model Isabelle Caro died. She was only 28, and though the exact role of anorexia in her death was unclear, it is certain that the illness was a major factor. Previously, weighing only 60 pounds, Caro had posed for an Italian magazine in a campaign designed to raise awareness about the illness.

The National Union of Modeling Agencies has criticized Friday’s amendment, claiming it will negatively affect the competitiveness of the French modeling world. “French modeling agencies are in permanent competition with their European counterparts,” the union said in a statement. “As a result, a European approach is needed.”

A separate measure was also passed Friday that made it illegal to condone anorexia — in a bid to suppress “pro-ana” websites (sites that encourage unhealthy weight loss). Administrators of websites that encourage viewers to “seek excessive thinness by encouraging eating restrictions for a prolonged period of time, resulting in risk of mortality or damage to health,” will potentially face a year in prison and fines of €10,000 ($10,900).

The affirmative vote on the two measures comes only a fortnight after French lawmakers rejected both of Veran’s bills. At the time, a parliamentary commission decided that a law banning skinny models would ultimately allow discrimination in the hiring process. And the law is by no means a sure-fire method of routing out pernicious eating disorders.

As Bustle’s Marie Southard Ospina has noted, “BMI cannot tell you whether a person has anorexia or whether a person is simply naturally slender. And this is where things begin to get murky.” Former anorexic and Guardian columnist Hadley Freeman wrote an article last month entitled, “I had anorexia – but not because I wanted to look like a fashion model.” Eating disorders, Freeman points out, “are the only mental illness that people still assume is caused by something identifiable and external.”

The proof of causation between uber thin fashion models and the anorexia sufferer’s illness is by no means bulletproof. And yet, even Freeman notes that laws such as the French one — if properly enforced (and she intimates that Milan’s catwalks have seen little change since Italy’s law was passed) — are no doubt a good idea, if only to relieve the average lady of body anxiety and the fashion models themselves of insane expectations.

On the whole, attempting to regulate the influential fashion industry to promote a healthy body image sounds like a good idea (no matter how difficult in practice). Which is more than can be said for another law currently being considered in France — which will effectively prohibit women from looking overly sexy in public. According to the Daily Dot, the law (which just passed the Senate) forbids the “passive solicitation” of prostitution. This apparently could result in women being arrested simply for wearing scanty outfits.

Needless to say, that law has feminists up in arms. Fatima Benomar of les efFRONTé-e-s told the Dot, “Our association has reacted very angrily to the introduction of passive soliciting, and denounced it… Prostitution is a phenomenon that affects all women. We are all worried, insulted, harassed when we wear skirts, with the famous insult 'slut.'”

The law has, thankfully, not yet passed the National Assembly. But taken in tandem with the newly minted laws restricting models’ sizes (not to mention the country’s ban on the headscarf in public spaces), it does make one wonder whether France’s legislators aren't perhaps just a little too eager to regulate the bodies of their womenfolk.

More like this
42 Black Owned Fashion & Beauty Brands To Support Today & Always
By Mekita Rivas, Shea Simmons, Kui Mwai and Dominique Norman
Most Comfortable Underwear For Big Butts
By Audrey Williams
'The Capture' Is Finally Back – & S2 Looks Tense AF
By Sophie McEvoy and El Hunt
The Lionesses Are Calling For Equal Access To Football In Schools
By Sophie McEvoy
Get Even More From Bustle — Sign Up For The Newsletter