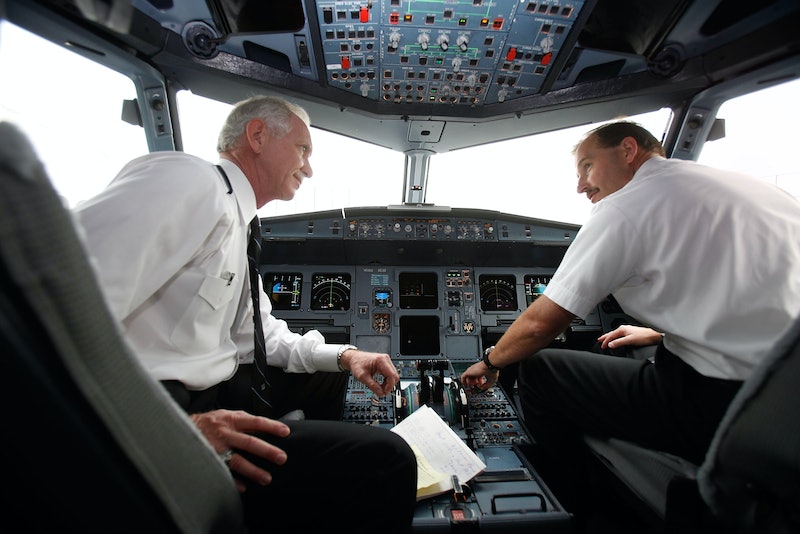 In light of the tragedy, some of the airline's Germanwings p ilots are reassuring passengers aboard. Pilots are people, and that's one thing flight crews are trying to remind their customers in order to counter potential fears about safety. Hugh Roche Kelly, a technical and production theater manager, traveled from Berlin to Paris on Thursday and, as reported by BuzzFeed News, documented his remarkable Germanwings flight experience on Twitter.

It hadn’t even occurred to me to think about that before I got on the plane, but there was a tense vibe – the crew were on edge, some passengers were definitely more nervous than normal… Once I was actually onboard, and looked at the crew door, it was all too easy to imagine how horrific the time before that crash would have been.

I was thinking about what kind of a response a company should make to something like this. Do you ask everyone to carry on as normal? With utmost professionalism and a stiff upper lip?

One Germanwings pilot wanted to make a difference, speaking in three languages about the challenges that the crews are facing, iterating how grateful they are that passengers continue to board the flights. What he said was necessary, but where it was said is just as important.

Mostly though, he said he just wanted to come out and stand in front of everyone, and let all the passengers on his flight have a moment of eye contact with him, and for us to meet him and for him to meet us.

At that point, the pilot isn't just a mysterious figure behind the cockpit door that passengers hear over the intercom — that pilot is a person, just like everyone else on board. Coming out and speaking to passengers, making eye contact, allow passengers to relate to the pilot.

I can't know, of course, if making that speech was a personal decision, or if it was something that was agreed on, but anyone listening could tell it was a difficult thing to do- to stand in front of 150 more-nervous-than-they-really-needed-to-be people and say "everything's going to be fine, because I am going to look after it," and I can't help but have enormous respect for him.

That pilot's small act had a larger than life effect — it gave at least one passenger peace of mind and a greater sense of security. What happened during the Alps crash is certainly frightening, and pilots are going the extra mile to settle fear by speaking with their hearts.

The Economist translated a German Facebook status about another Germanwings pilot speaking to passengers:

. . . the captain not only welcomed each passenger separately, he also made a short speech before take-off. Not from the cockpit, he was standing in the cabin.

He spoke about how the accident touched him and the whole crew. About how queasy the crew feels, but that everybody from the crew is voluntarily here. And about his family, and that the crew have a family, and that he is going to do everything to be with his family again tonight. It was completely silent. And then everybody applauded. I want to thank this pilot. He understood what everybody was thinking. And he managed to give me, at least, a good feeling for this flight.

Passengers and crew are still healing after the devastating crash, but a little bit of heart can be all that it takes to make everything a little bit better.