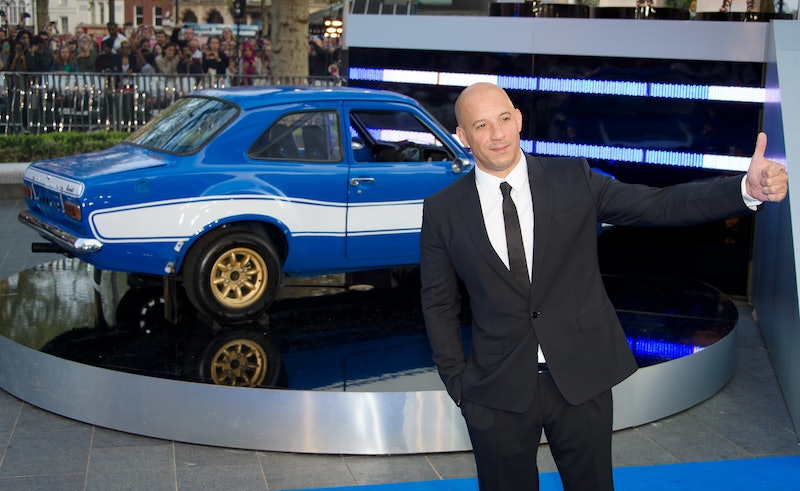 Friday, April 3, marks the day when the seventh Fast & Furious film roars into movie theaters, and the action flick is essentially kicking off summer. Fans are in high anticipation, and the franchise that has already earned over $3 billion worldwide does not even show the slightest sign of slowing down (pun maybe intended). So when does Fast & Furious 8 come out? Because more films are sure to come... right? You can probably count on it, according to star Vin Diesel. Diesel appeared on Jimmy Kimmel Live and hinted that the journey is not over for Dominic Toretto and his crew:

You know I always think of these films multiple pictures in advance. I think of them as trilogies. Kurt Russell came in for this movie, but he was really, we really hired him because of a story that follows this. That takes place in New York...

So, now that we can be most certain that the franchise will keep going, when exactly will Fast & Furious 8 be released? I know, I know, Furious 7 technically just came out on Friday and I'm already jumping the gun. But I assure you that plenty of fans are already awaiting the next adrenaline rush to appease their senses. And, considering the massive worldwide success of the franchise since the first film in 2001, you better believe the studio heads are planning something to happen real quick. I decided to take a look into the past release schedule of the previous films to try to gauge the most realistic release date for the eighth Fast & Furious.

The first film, The Fast and The Furious, was released in 2001 and was followed fairly quickly by the sequel, 2 Fast 2 Furious, in 2003. The third installment, The Fast and the Furious: Tokyo Drift, was released 3 years later in 2006, but did not star any of the original cast members and chronologically took place after the sixth film. OK, are you still with me?

Fast & Furious in 2009 marked when all of the original cast members — Vin Diesel, Paul Walker, Michelle Rodriguez and Jordana Brewster — returned to reprise their roles, and they all remained on board until the end of the the seventh. Fast Five, Fast & Furious 6 and Furious 7 each had two years in between them, and I'll venture to say that the sixth film landing on the list of highest grossing films EVER might have sped up their release process. In this vein, we could probably expect Fast & Furious 8, the NYC edition, to be released in Spring of 2017.

But what about the cast? I am sure they all want a piece of the Furious 8 pie, but how will filming happen in between the actors' schedules in the coming year or so? Michelle Rodriguez does not have any upcoming projects listed on her IMDB, and Jason Statham only has a film in post-production, while Kurt Russell is already into filming the latest Quentin Tarantino film, The Hateful Eight. There is also the question of what will happen to Brian O'Connor, Paul Walker's character, in the wake of his death. Walker's brother, Cody, stepped in to finish some of the final scenes for his brother, and this has allegedly lead him to pursue an acting career. His manager, Matt Luber, shared to the NY Daily News , "I’m not sure if they are going to make an eighth movie, but if they did, I’m sure he would entertain a conversation (about a role)."