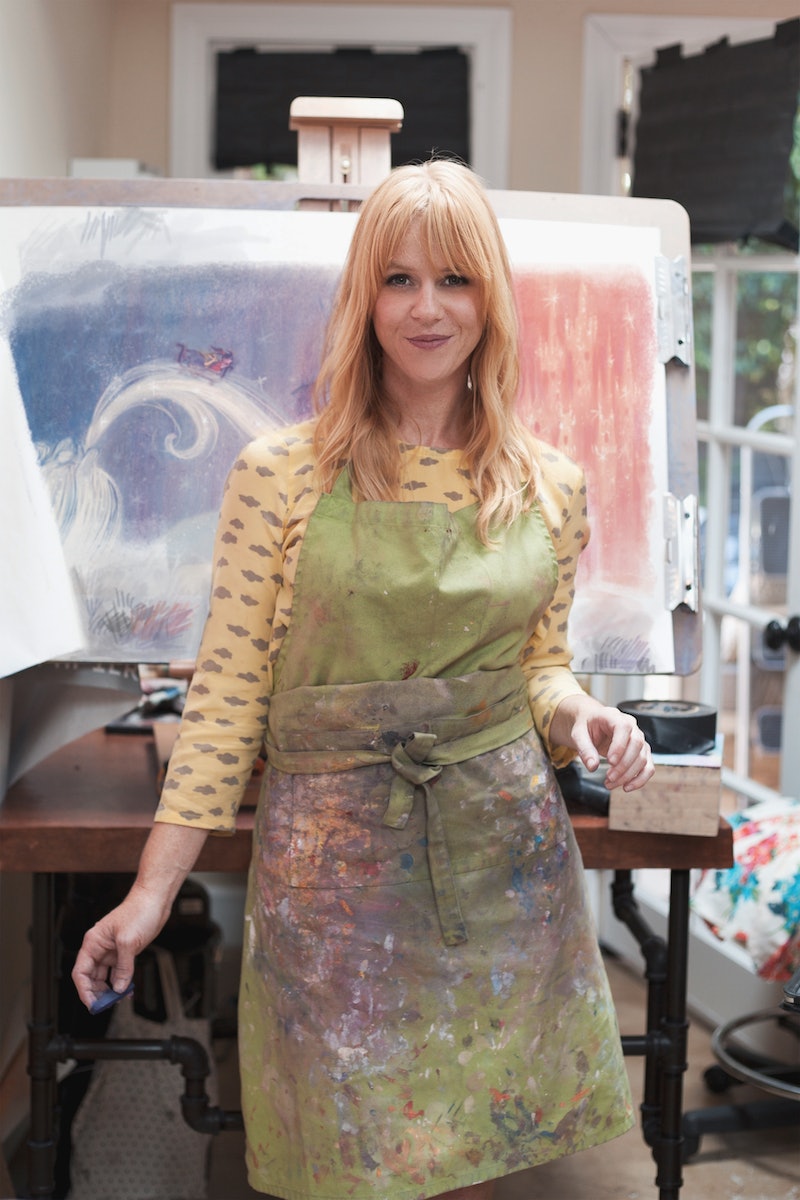 Disney artistry runs in the Keane family. Glen Keane is nothing short of a legend: He oversaw animation on some of our favorite Disney movies growing up, bringing The Little Mermaid, Aladdin, and Beauty and the Beast to life. That Disney gene was passed down to his daughter Claire, who continued the family legacy by working for visual development on Tangled and everyone's favorite new animated movie ever, Frozen. Claire brings that magical spark to every single page of her new debut children's book Once Upon a Cloud.

Once Upon a Cloud is jaw-droppingly stunning. There isn't really a better way to say that. You can see the Disney influence in Claire's artwork, but it's taken to another level, as if you're dreaming a whole new Disney-fied landscape. So it's no surprise that Claire got the idea for her book when she was working on the art for Tangled. Even Mandy Moore, who voiced the Rapunzel character, gave Claire a well-deserved shout-out for her work.

Once Upon a Cloud follows a little girl name Celeste who is trying to think of a special gift she can give her mother, but she falls asleep before she can come up with an idea. Readers are swept into her dreams, meeting the stars and the moon, and the sun in swirls of color and light. It's when she wakes up that Celeste realizes she knew all along what she could give her mother. It's a lesson adults should learn as well as children: Inspiration comes from ourselves, from our subconscious.

Basically, if you're attending a baby shower soon, bring along this book and then just try to pry it away from the grown-ups' hands.

I got to talk with Claire and get a peek at the artwork inside her book, which I'm now considering framing and hanging up in every room in the house.

BUSTLE: What was it about working on Tangled that inspired you to write a children's book?

CLAIRE KEANE: While working on Tangled I was asked to design Rapunzel's murals that she paints in the movie. I found it fitting that the murals around Rapunzel's bed represent her dreams. I painted Rapunzel asleep in bed floating through a night sky, and it made me wonder where she was going and who she would meet in the sky. This led me to finding the idea for my own book, Once Upon A Cloud.

What do you hope little kids well get out of reading this, even if they don't directly realize it?

At the time that I wrote Once Upon A Cloud, my daughter was a newborn and I was intent on getting her to fall asleep. Through my reading about sleep, I discovered the importance the role dreams and the unconscious mind play in our everyday life — many artistic and scientific discoveries have been made through dreams. I realized I wanted to pass on to my children and any other children who may read this book that so many of the questions to our problems can be solved through our dreams if we just let go and let our dreams guide us.

I'd love to know more about your experience at Disney. Was it always a plan to follow in your father's footsteps?

I was raised in a family where drawing was second nature. I drew all the time but I didn't realize that I was going to make a living out of it. When I did decide to go to art school, it was for fashion design which turned into wanting to do fashion illustration which then led me to realize that it was the people under the clothes that interested me more than the clothes—which led me to wanting to tell stories through my drawings.

I went to a graphic design school in France where we were encouraged to become graphic designers. For my thesis I made a big fairy tale book that I wrote and illustrated. One of the members of the jury asked me with sympathetic sincerity if I was embarrassed to be drawing fairy tales at my age. It was then that I realized that I had never stopped doing what I'd always loved and it was undeniably what I wanted to continue doing.

I told my dad how much I loved developing and exploring the story and visuals for my thesis book and how I wished a job existed just for development and exploration specifically. He looked at me incredulously and said, "Claire, didn't you know that I do it all the time at Disney! It's called a visual development artist." He reminded me that it was precisely this job he had been doing when he had designed Ariel, the Beast and so many of the characters before animating them. He was just starting to develop the story of Tangled and told me they would soon be needing a visual development artist. When they did need one, I was first in line with my big fairytale book.

Working at Disney on Tangled was like living in a dream — getting to dive into the wonderful fairy tale of Rapunzel and developing what her world would look like. It was immensely fulfilling and it shaped who I am as an artist today. It led me to crave to work on projects that I was equally passionate about. In a sense, it is what led me to leave Disney and pursue developing my own stories — notably my first picture book, Once Upon A Cloud.