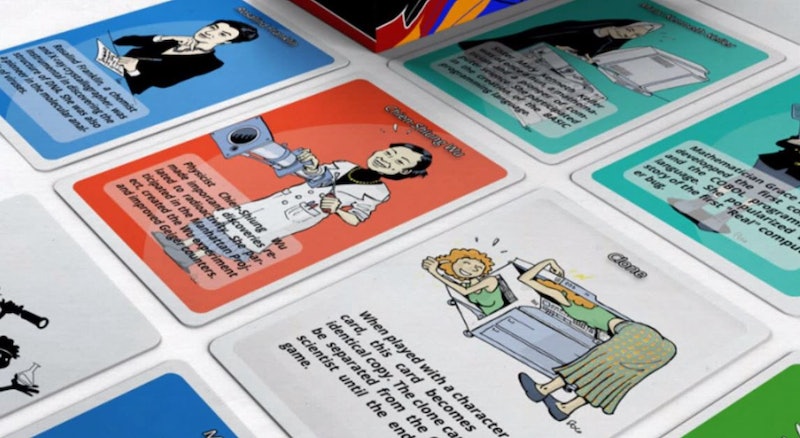 Take a minute and think about how many female scientists you can name. If the answer is "not as many as I'd like," you might want to look into a Women in Science, a new card game featuring female scientists currently fundraising on Indiegogo. Because let's face it: None of us probably knows as much as we should about the many, many women who have done incredible things in STEM fields.

“We’re just parents looking for inspiring role models for our 7-year-old daughter,” the creators of the Women in Science cards write on Indiegogo. “We realised that we all know singers, actresses, etc., but in the end very little about the great women of science. A quick search demonstrated that they do exist, but that for historical reasons they’ve rarely received the recognition they deserve.”

And in fact, this is a common misconception that's not unique to STEM. In a society that treats being male as the "default," we tend to just assume that most important things in the world were done by men — even though it couldn't be further from the truth. There have not only been amazing women scientists, but amazing women who were activists, entrepreneurs, political leaders, artists, and every other profession under the sun. Women have always done amazing things. And the fact that their contributions have not been given the recognition they deserve does nothing to diminish their excellence.

So when it comes to science, who are we talking about, exactly? Well, here are four amazing women who will be featured on the Women in Science Cards:

Cecilia Payne was an astronomer and astrophysicist from the early 20th century. In her doctoral dissertation, she proposed an explanation for the amount of helium and hydrogen in stars. Her adviser counseled her not to advertise the paper since it went against much of the prevailing theories of the day, only to reach the same conclusion himself years later with only a brief acknowledgement to Payne and to be widely credited with the discovery.

Grace Hopper was a rear admiral in the United States Navy Reserve, and one of the first programmers of the Harvard Mark I computer in 1944. She invented the first compiler for a computer programming language and was instrumental to the development of computer science over the course of her long career.

Wangari Maathi was a Kenyan biologist and environmental activist who founded the Green Belt Movement, a non-governmental organization dedicated to environmental protection and women's rights. She was the first African woman to receive a Nobel Peace Prize, and also went on to serve in Parliament in Kenya and as assistant minister for Environment and Natural Resources.

Rosalind Franklin was a chemist whose work was invaluable to the discovery of the molecular structure of DNA, though her contributions went largely unrecognized during her lifetime. At the time that Franklin was working on DNA, her research was shared without her permission by a fellow researcher, Maurice Wilkins, who seems to have been under the baffling impression that she was hired as his assistant. Wilkins, along with Francis Crick and James Watson, were ultimately credited with the discovery of DNA, for which they won the Nobel Prize.

So what other women scientists should you know about? Well, you'll just have to order a set of cards to find out...

More like this
Women Around The World Are Cutting Their Hair In Solidarity With Mahsa Amini
By Darshita Goyal
Black Women's Equal Pay Day Highlights An Upsetting Problem
By Brandi Neal
Self Esteem's “F*cking Wizardry” Is An Anthem About Knowing Your Worth
By El Hunt
Bennifer, Kravis, & 14 Other Fun Celeb Couples Halloween Costume Ideas
By Emma Carey and Brittany Leitner
Get Even More From Bustle — Sign Up For The Newsletter