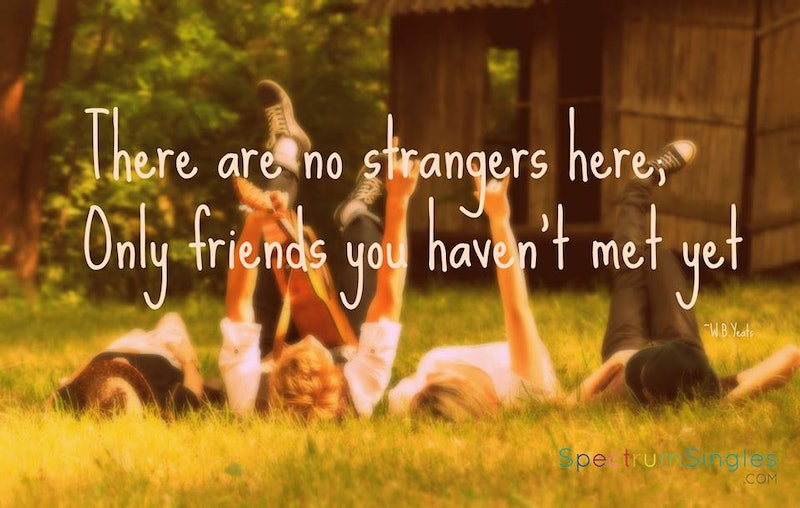 Mother-daughter duo Kristen Fitzpatrick and Olivia Cantu may be changing the autism community for the better with Spectrum Singles, their dating site for people with autism. Both on the Spectrum themselves, they launched the site to create a unique community for those with autism to meet and connect. As of March 2014, the Centers for Disease Control and Prevention cited that one in every 68 kids are on the Autism Spectrum. More specifically, one in 42 boys and one in 189 girls. As this number is so high, it's truly a community issue; most people know someone touched by the disorder.

Despite a difference in brain function, though, autism is highly considered just that: a difference, not a disability. If you've ever known someone on the Spectrum, you know that processing thoughts in a different way than the rest of the world is daunting, sometimes even terrifying. Behavioral norms are more difficult to conceive of and, depending on where along the Spectrum that person lands, an "average" life may never be attainable. These rules, of course, extend to an average dating life, and the pursuit of relationships as a whole. If a potential partner is unable to understand the way that your brain works, how are they supposed to connect with you in a way that's going to be fulfilling for both parties involved?

Cantu spoke to Buzzfeed News on the stigmas associated with the disorder and the difficulty of bonding with friends who are not on the Spectrum. She wanted to be "free of the stigma and express [herself] without anxiety." She also said that though there were other sites and communities out there for those with autism, the majority of them weren't quite hitting the mark because they'd been created by people who didn't have the disorder.

The two each have different professional specializations, Fitzpatrick in business and Cantu in technology, which allows them to run the site not only with the emotional intellect that others are missing but as a self-sufficient two-woman team.

What may be the coolest thing about the site is that it doesn't rely on autism itself to robotically pair a dream couple. Instead, Fitzpatrick and Cantu created a 184-question Spectrum Compatibility Test, which sets visitors up with others who share their same "spectrum attributes." Cantu said that while there are certain attributes common to those on the Spectrum, not everyone experiences them. For example, not everyone suffers from social anxiety but she herself experiences physical boundaries pertaining to affection, an issue that potential partners should be aware and respectful of.

The site launched beginning of this year and though it's unclear how many users it currently has, the community is sure to benefit from a hub created by those who truly understand the ins and outs of the Spectrum itself.

For more information on the budding community, head over to Spectrum Singles.