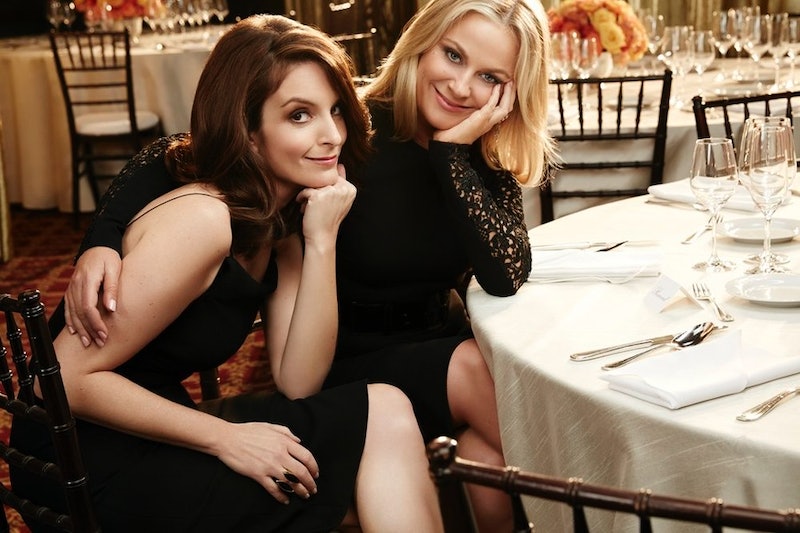 It's National Humor Month, so it's the perfect time to remind you why funny women are sexy. There was a time that the general consensus was that women couldn't be funny, that they were less funny than men, and that there was no way that women could be attractive and funny at the same time. Both men and women believed that having a sense of humor was a strictly male characteristic, and people felt threatened by a funny female.

Let's hope with all the strong, fierce, and hilarious women in comedy that those humor and gender biases have gone the way of seltzer down the pants, or pies in the face. With so many scary and challenging things happening in the world, there's room for funny females now more than ever.

If women can find men with a sense of humor appealing and sexy, why can't the reverse be true with the female in the relationship being the funny one? There doesn't appear to be any problem with funny women in a same-sex couples, so it shouldn't be a negative in heterosexual ones either. Having the ability to find the humor in life is a fantastic trait to have, and one that enhances any relationship.

Humor benefits every couple at every stage, from the initial attraction to the we've been together forever partnership. Laughter can keep a relationship exciting, fresh, and solid. It can help overcome anger as it's hard to stay mad at someone who's making you laugh your ass off.

Each time you laugh with your partner, your relationship gets a little bit stronger. Laughter can get you through the bad patches in a relationship, it can make you feel even more comfortable with each other, and help you to not take yourself too seriously. Humor is the sugar that helps the Vicodin go down.

1. Everything has the potential to be material for comedy including bits for stand-up, inspiration for a sketch, or a funny story for dinner party.

The best comedy comes from true life experiences. Humor helps us cope with difficult and challenging situations in our life, so that makes anything that happens to us open to humorous interpretation. Your fear of gummy spiders is fair game for comedy.

If it's not embarrassing to her, hopefully it won't be embarrassing to you. If she thinks the time you got caught (by her parents) having sex in the driveway of her childhood home is a hilarious story to tell at a party, a comedy club, or spoken word event, then you need to be okay with it. Don't take the things she says about you personally — sometimes a joke is just a joke, it's not a passive-aggressive criticism of you.

If your woman is funny, chances are that she's gotten used to being the center of attention. She's probably used humor to stand out from from the crowd, and she most likely considers her humor one of her best qualities. You can have your own funny moments, but don't turn your relationship into a comedy competition. It's okay to let her shine.

4. The bedroom is not off limits to laughter.

Sex can be hilarious especially when it entails strange noises, weird facial expressions, or getting stuck in a freakish body-positions. All these things are part of a healthy sex life, and if you find the humor in them rather than the humiliation, it can only help you have better sex.

5. She needs support so you'll need to show her that you appreciate her by laughing at her jokes and witty banter.

Someone who can make others laugh is someone who should be appreciated, and she'll expect you to take an interest in her projects or wherever she showcases her funny. Try to go to her shows, laugh at her jokes, and generally show her that you think she's a comic genius.

6. She knows when not to be funny.

She's not going to be cracking jokes when something life threatening goes down. If she's funny, she has timing, knows her audience, and will adapt accordingly. She has sense enough to know when humor may not be the appropriate response.

You've got to know stuff in order to make fun of it. Comedy takes intelligence—there's no such thing as a stupid comic. If they seem dumb, it is merely a comic persona that they are wearing. It takes someone with a quick wit to be able to spontaneously deliver a one liner to your waiter.

It's practically impossible to be funny at all times, and it's especially difficult to be funny on command, even if she's had a ton of training in improvisation. Humor is always better when it comes from a place of inspiration, not desperation.

Being involved with someone who has a fantastic sense of humor is truly a gift, but nobody wants to be the butt of the joke. Learn how to take a joke, how not to take things too seriously, and be happy that you've got someone to help you see the fun and funny of life.