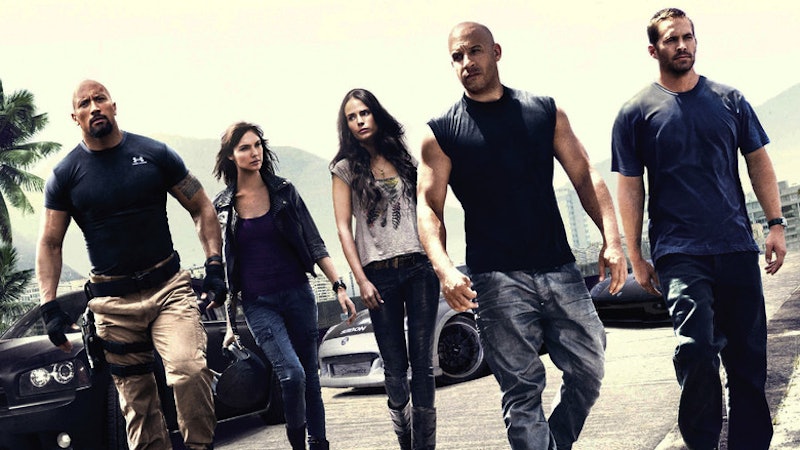 Furious 7 was undoubtedly one of the most anticipated action films of 2015, and for good reason: It includes drama, love, revenge and plenty of action — not to mention actor Paul Walker's final on-screen appearance, which is undeniably heartbreaking and bittersweet to watch. Unsurprisingly, it seems the franchise's formula of high-speed, high-adrenaline plot lines has paid off once again: According to The Hollywood Reporter, Furious 7 smashed foreign box office records this week, managing to pull in over $60 million in just two days. That's more than the entire foreign lifetime gross of the first The Fast and the Furious installment (which, according to Box Office Mojo, is $62 million) — so, yeah, this movie is already turning out to be pretty impressive, box office-wise.

Additionally, in a whopping 25 countries, Furious 7 managed to gross the highest opening day ever for a Universal Pictures film.

Of course, The Fast and the Furious movies hold their own kind of charm, and other like-minded films out there are likely to be a little different than anything you'd see in this franchise. However, that doesn't mean there aren't plenty of other films to choose from in the genre if you're still high off the rush of seeing Furious 7 (for the 10th time...hey, I don't judge) and want to fill the void it's left until the next sequel — even if they approach their respective plots in a different angle.

So, if you're looking for a movie to help you pass the time until Fast & Furious 8, here are some other similar films that might keep your engine running, so to speak. These movies should definitely keep you going until the inevitable Furious 8. (Or, at least until they release Furious 7 on DVD.)

Nicolas Cage trying to steal, like, 50 cars in order to save his brother's life while the police are breathing down his neck? Angelina Jolie being her usual amazing self? Did I mention CARS? There is literally nothing not to love in this movie. With its tagline of "Ice cold, hard wired," you know it's about to go down from the opening credits.

A bit of a recent classic, Rush sees Chris Hemsworth as Formula One racer James Hunt and follows his ongoing rivalry with his rival and fellow driver Niki Lauda, played by Daniel Brühl. This one's set in the '70s, and really highlights the decadence and extravagance that Formula One drivers were partial to. If you like a bit of dark drama with your action (or just a little Chris Hemsworth), check this one out.

When Jason Statham is in a movie, you basically know you're in for some high-octane craziness — and Death Race totally delivers. Statham plays an ex-conman named Jensen Ames, who is forced by prison officials in a post-industrial world to compete in insane car race in which you only win if you kill the person you're racing against. It's absolutely ridiculous... and therefore absolutely amazing. Apparently someone agreed with me, because there are also two more Death Race movies in the franchise.

If you're feeling a little spent from all the drama, then turning to 1981's The Cannonball Run should offer a bit of a lighthearted relief. Starring the likes of Burt Reynolds and Farrah Fawcett — amongst many others — the film is about a group of eccentrics who decide to go on a crazy illegal cross-country race, and will stoop to just about anything to beat each other. It's got all the action of other racing movies with a ton of comedy to boot, so it's definitely a must-watch.

If you haven't seen Talladega Nights: The Ballad of Ricky Bobby, I'm not sure what's gone wrong in your life up to this point. Will Ferrell plays the title character who, with the help of his BFF and teammate Cal Naughton (portrayed by the amazing John C. Reilly), remains the top NASCAR driver in the world... until some French bro moves in on his spot, causing all kinds of uproar. This is one of Ferrell's more underrated gems and will keep you laughing, even if the racing isn't center stage.

Cars may be a Disney movie, but I think we all know by now that Disney's not just for kids. When a hotshot race car named Lightning McQueen gets stuck in Radiator Springs after damaging the road and being sentenced to repair it, he finally learns the true meaning of love and friendship. Sure, it might not pack the same high-energy punch as Furious 7, but it's heartwarming and sweet — and hello, it's about a cartoon car!