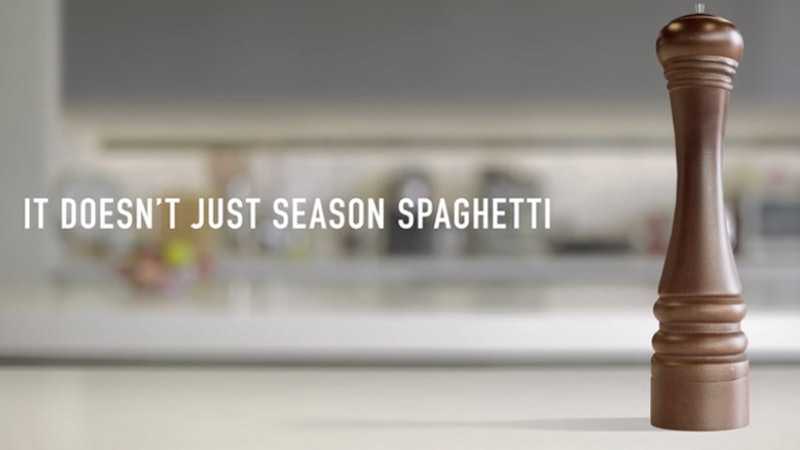 Smartphones are great, but it would be hard to say that having access to our Facebook, Twitter, and Instagram accounts 24/7 has made us more polite--we all know that person who's glued to their phone, whether they're on a date, sitting down for dinner, at the movies, etc. But there may be a solution coming to getting people to put down their phones, at least through dinner: Australian pasta sauce brand Dolmio invented a pepper grinder that blocks wifi while you use it. Maybe now you'll actually have to talk to your family at the dinner table. Ugh, who does that anymore?

In all seriousness, here's how the Pepper Hacker works: first, you install a profile on how ever many devices you want so that they can be managed from the grinder. I'm not sure how you'd manage to round up all your family's mobile devices without them knowing, but apparently it uses something called "remote device management software." I really have no clue what that means (I imagine it's similar to the way Bluetooth works? Maybe?), but Brendan Forster, the head of creative technology at the marketing company that helped bring the Pepper Hacker to life, explained it like this:

"Think of it like as when you're at an organization--they install a profile on your phone so that they can back up information or allow authorized apps, and we've used that in a really creative way."

I'm just going to take his word for it and move on. So, after you (presumably) stealthily borrow your loved ones' electronic devices and install the software, and then put them back right where they were, all it takes is one twist of the Pepper Hacker and boom, all the installed devices will suddenly stop working. And the Pepper Hacker actually grinds pepper, so your family will be none the wiser--who would ever think this innocent spice grinder could cause so much destruction?

And if you think the Pepper Hacker sounds great, just wait till you see it in action--Dolmio gave a few prototypes to a group of Australian moms (without telling the rest of their families), and filmed their families' reactions to their tablets, phones, and TV's "magically" shutting down. Peep it below:

And you thought you were addicted to your phone--I at least have the decency to put down my phone for the 3 minutes it takes to properly set a table (if that). Kids these days.

If you're on the way to the store to pick up your very own Pepper Hacker, I'm sorry to tell you to slow your roll because they're not available for sale yet. Forster said that the Pepper Hacker is still in the very early stages of development and won't be on the shelves anytime in the near future. He explained, "At this time it's a limited number of prototype devices that we've built just to basically experiment to see what happens when you remove tech from the family room."

So, wait, are they planning on selling it at all, or was this all a ploy to get me hyped about a gadget that I may never be able to actually get my hands on (and to buy Dolmio pasta sauce)?? Just think of the potential this device has! Imagine if restaurants used the Pepper Hacker, then you'd never have to encounter a rude date again! Not to mention, think of all the families that could be brought together once they were forced to actually interact! You can't just give us the Pepper Hacker and then take it all away, Dolmio!

For now, all we can do is pray that Dolmio makes the Pepper Hacker a reality. Until that happens, I guess the only thing left to do is actually make the effort to disconnect from all our mobile devices once in a while. It may not be as fun as having a pepper grinder do it for us, but it will get the job done just fine.

More like this
Remember These Ancient Pieces Of '90s Tech?
By Lucia Peters and Emma Carey
This App Tells You If Your Skin Care Products Are Working — So I Tried It
By Amanda Ross
Instagram Users Are Reporting Issues Scrolling & Logging In
By Courtney Young
What Does “Gatekeeping” Mean On TikTok? The Viral Term, Explained.
By Courtney Young
Get Even More From Bustle — Sign Up For The Newsletter