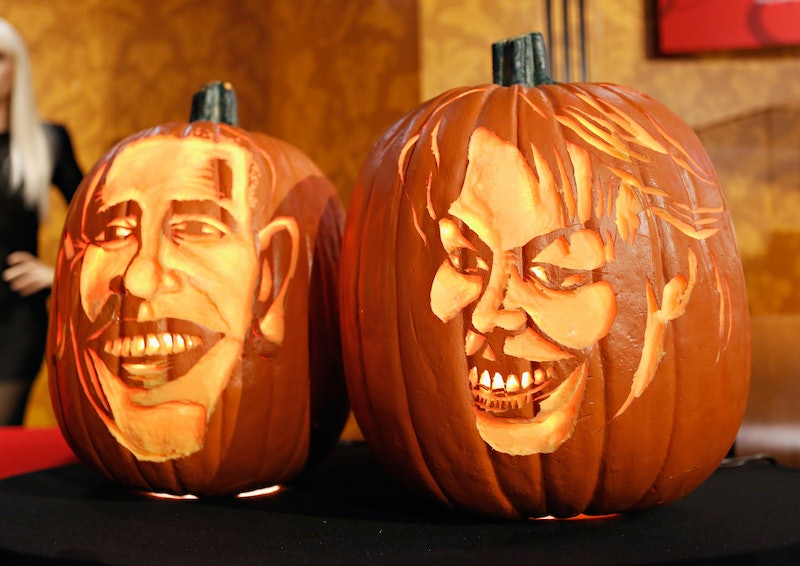 I love dressing up for Halloween. Always have. When I was little I would make costumes not only for myself, but for my younger brother (who, for the record, would have been much, much, much happier with a Target-bought Power Rangers costume than anything I came up with).

As I got older, the dressing up became more fraught with difficulty. Funny or sexy? Creative or sexy? Creative, funny, or sexy? These, my friends, are the age-old questions that every female age 12 to infinity faces each year in October.

Now, with the wisdom of 22 years (and 22 Halloweens) on this planet, I can in hindsight recognize which years I rocked it and which years I didn't. There were the many years of Disney Princesses (emphasis on Snow White, Pocahantas, and Esmerelda because they all had black hair and varying degrees of ethnicity). There were the Raggedy-Ann costumes in seventh grade (rocked it). There was the ensemble "slutty football team" outfit in ninth grade (didn't rock it). There was the Austin Powers year (rocked it. Blue jumpsuit, need I say more?). The year I went as one of the cast from Newsies. The year I went as a "cloud" (white leotard, lots of glitter). The Halloweens of my childhood are littered with costume do's and don'ts.

In college, the pressure to find the perfect balance of sexy/witty was even stronger. Depending on who your friends were and where you were planning on going it was a heinous error in social judgement to err too far on one of the spectrum or the other. Going to a frat? You better up the slut-quotient. Hanging out with cerebral types who were above that pandering? Witty was the way to go. So much thought went into those costumes, so much effort to strike the correct balance. It was a case of us policing ourselves, of women policing other women, and of societal norms (rather than our own minds) dictating what was and wasn't acceptable.

We all need to grow up with regard to Halloween. If someone wants to run around naked with blue body-paint and call it being an Avatar, who are we to shame them for that? If someone wants to dress the way Lindsey Lohan did in Mean Girls, live and let live. We need to stop slut-shaming on Halloween. We also need to stop creating spaces (parties, bars, whatever) where women who aren't dressed as a "sexy (insert character here)" are marginalized. Men place these expectations on women, yes. But women also do it to each other.

We are better than that. We have to be.

Don't infer a woman's intelligence or judge her attractiveness based on her Halloween costume. I'm sure there are MENSA candidates who will spend the weekend in a French Maid's costume. I'm sure there are beautiful girls who will go out of their way to look grotesque, and vice versa. We should celebrate all of that. If we can't withhold criticism of other women's choices on the one night of the year when, theoretically, anything goes, how will we ever stop judging and assuming and shaming the rest of the year?