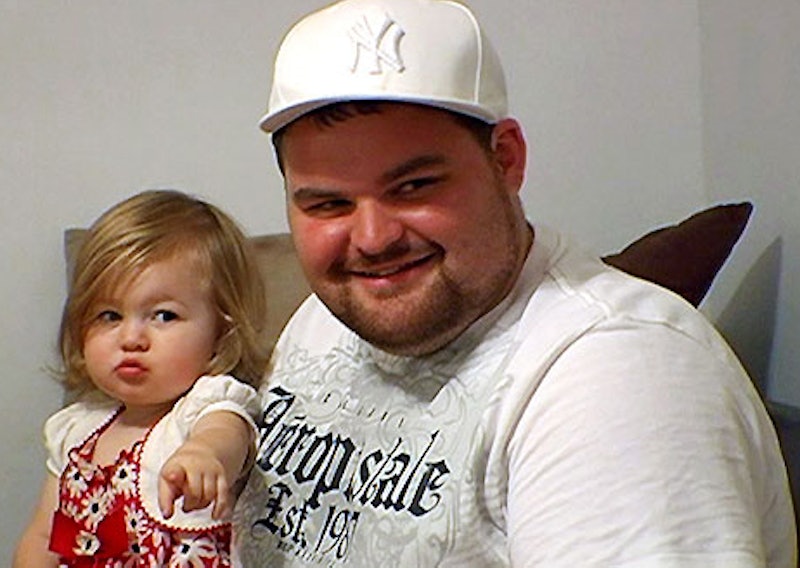 Teen Mom OG has reacquainted fans of the series with the former teens and adorable kids that we fell in love with six years ago on the original 16 and Pregnant. And even the boyfriends (well, mostly ex-boyfriends) are getting a little bit of the spotlight, because one of the most successful parents is Teen Mom Amber Portwood's ex, Gary Shirley. Since having daughter Leah in 2009, he's started his own business selling his homemade baked goods and stumped for safe sex with condoms with his face on them, and now Gary has a new girlfriend, Kristina Anderson. These two have been dating for a couple of years and it looks like things are getting serious.

On Teem Mom OG, we see Amber being forced to adjust to a world where not only is she no longer with Gary, but one where Gary is the primary parent in Leah's life. While Leah is extremely loving, sweet, and adorable with both of her parents, she lives with Gary and Kristina. According to Radar Online, Amber is only approved for visits and sleepovers — she doesn't share custody yet.

In 2013, Gary went on a Twitter "rant" about being disappointed that his girlfriend revealed that she was still in a relationship, perhaps referencing Kristina's marriage (more on that in a minute). However, when RadarOnline asked him about this rant and if it was in reference to Kristina, Gary said no. So besides these various news bites, what should you know about Kristina?

She Used To Be Married

Before meeting Gary, Kristina was married to Gregory Anderson. According to a report obtained by Starcasm, Gregory and Kristina got divorced in early 2014.

But There Are No Plans For A Shirley-Anderson Wedding

While most other Teen Mom OG couples are in some stage of wedding planning, including Amber and her fiancé Matt, Gary and Kristina aren't publicly flaunting a ring.

She Has A Daughter

Gregory and Kristina had one daughter together, Karly, who's close to Leah's age. The two already look like sisters, and even though there's been some drama, it sounds like the Shirley/Andersons are starting to make the shared custody work. I imagine these two cute kids are like two peas in a pod. Or two dancing babies in a gif.

And She's Expecting Another One With Gary

On New Year's Eve 2015, Gary took to Twitter and Instagram to announce that he was going to have another baby girl with Kristina. MTV still hasn't shown Amber's emotional reaction to the news, but it was prominently featured in the season trailer. Since Amber's arc this year is focused on her struggle to accept how different things are now that she's out of jail, this should play a large role in future episodes of Teen Mom OG.

Leah Loves Spending Time With Her

While all these other things are reasons why Gary's relationship with Kristina might work, the Teen Mom OG couple have received the only seal of approval that matters: Leah gets along fantastically with Kristina. Let's hope these two are in it for the long haul, because I'd hate to see Leah be disappointed.