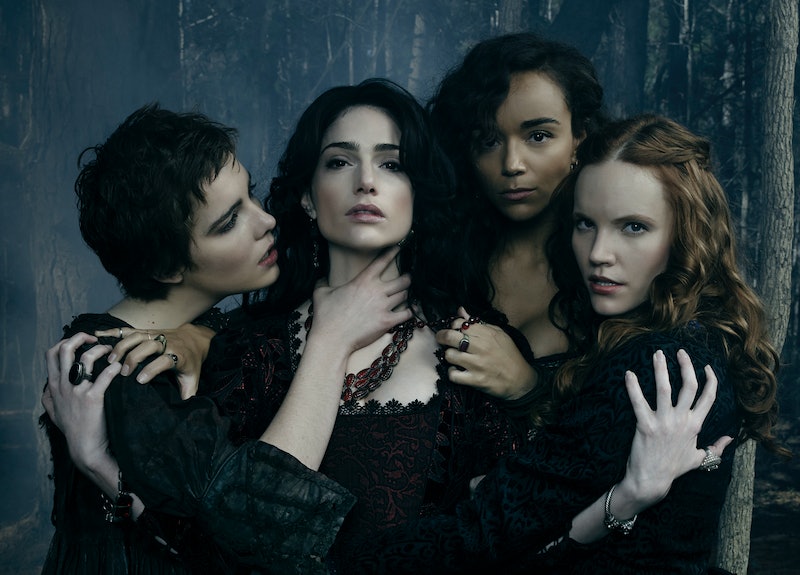 When WGN America's supernatural series first started, Salem faced some criticism over its portrayal of what was a very dark period in America's history: The Salem Witch Trials. In the first few episodes, it could have been easy to assume that the show was about devil magic that the good-hearted John Alden had to vanquish to save the town of Salem. However, things change as the series goes on and heading into Season 2 of Salem, women are the ones running the show and Alden is just trying to get a foothold. It's becoming clearer that Salem is less about evil women ravishing Salem and more about a Walter-White-ish female character, Mary, breaking the bounds that demand that TV heroines are precious and likable. And that's exactly what co-creator Adam Simon said he was going for when I spoke to him on the Salem Season 2 set in March.

"It was evident to me that we had come through a sort of renaissance period of complicated male anti-heroes that were really opening up the drama in a new way — your Tony Sopranos and Walter Whites — but there were not women characters even close to that degree," says Simon. "In a way I still think it’s taboo to let women be that bad except in very restricted areas in a way and of course if they are that bad, they must be, a stake must be drive through their heart ... so right from the get-go our idea was no, no we are going to have lead character who is as much Lady Macbeth and she was Scarlett O'Hara and she is going to leave that ambiguity right on stage and then we were going to surround her with other strong, complicated contradictory women."

Above: The seat of Salem power, Mary Sibley's house on the Salem set.

And heading into Season 2, that seems to be the playing field completely. Having vanquished last season's villain Increase Mathers, Mary and the rest of the witches are facing each other's forces, rather than those of men. (Sure, John Alden is likely to be a threat to Mary at some point, considering he wants to kill her after she left him for dead, but he's not the focus here.) Salem Season 2 is subtitled "Witch War," and if its set-up is any indication, we're in for heaps of female power and only a side of the requisite male domination to keep us firmly nestled in the right time period.

"We’re stretching the bounds of what was possible in that period, but we’re trying to get at the idea of 'why imagine witches in the first place if it isn’t to get at and see a female point of view on female repression?'" says Simon.

It may be foreign for TV audience who are used to only seeing bad women characters as femme fatales, rather than full on anti-heroes, but it's a challenge that Mary actress Janet Montgomery welcomes.

"I kind of revel in it. There’s something about it that appeals to me because it seems like often in TV there seems to be like a certain stigma around women doing things that men can," says Montgomery. "You know how affairs are always perceived that it seems to the woman tempting the man, the man’s always forgiven and the woman isn’t by and large. There’s something about playing a woman who’s perhaps more difficult than the man ... badder than the men."

And that idea of bad women characters ruling the screen rather than terrorizing it is something that leaves exciting possibilities ahead. It's especially exciting for actresses Elise Eberle (Mercy Lewis) and Tamzin Merchant (Anne Hale) whose young witch characters are coming into their powers and power struggles this season, especially after Anne accidentally discovered her powers and killed both her parents as a result.

"You feel like your sort of down that [dark] path already and so in a way you’ve taken the first step whether you want to or not, so it’s easier I think to take more steps down that path once you’re on it," Merchant says of her character's Season 2 arc. "I think really we find Anne just struggling with accepting who she is versus who she wants to be and that’s such a human struggle we can all really relate to. I think, forget powers and all of that, it’s just really about being the person she wants to be."

Merchant also notes that Anne will be dealing with the bound of patriarchal society as she figures out her witchy powers, too. "Anne is left with is this house and fortune that now other men might want to come and get because of course once she marries someone it goes to the man because of course it’s a patriarchal society we’re in, so that’s interesting that she’s by herself with this fortune while the wolves are circling," she adds. Of course, this could go many ways, but considering the dark streak we've seen in Anne, I'm hoping it means she finds a way to rebel against the rules of the time period. One can hope, right?

For Mercy, things are going to be a little less complicated, but no less interesting. One of the great things about Mercy's character is that while she's very clearly a teenager with very teenage-level reactions to life, she's not mired in the TV trope that young girls are boy crazy.

"Her love interest is killing. It’s amazing. I’m so lucky to have such a strange character," says Eberle of her unique witch.

And that love interest is center stage as Mercy amasses her allies and prepares for the Witch War. "She is kind of reckless and I keep mentioning this: when a teenager has so many emotions and she like lashes out and doesn’t think about consequences, it’s messy," adds Eberle.

We'll only be able to see as far Episode 1 when Salem Season 2 premieres at 10 pm ET on WGN America April 5, but if what I heard on set is any indication, this season will take bad women characters to a place we've not yet seen on mainstream television.