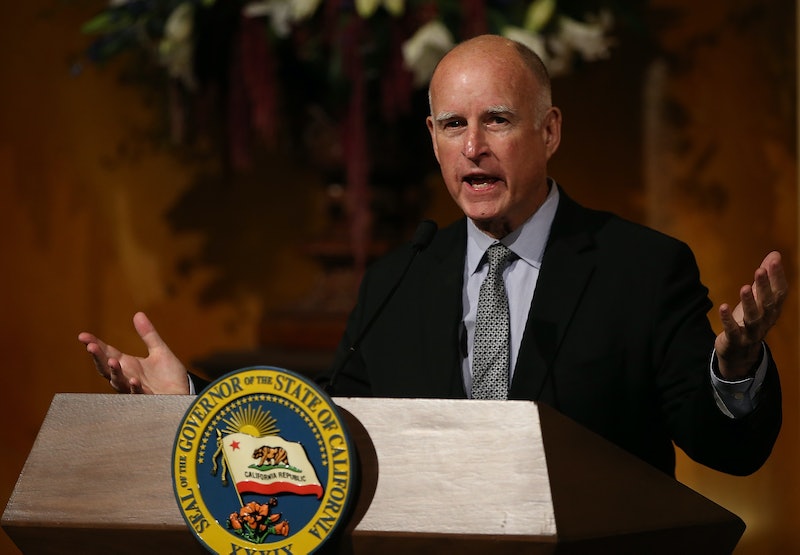 In the wake of the mandatory water restrictions recently enacted to combat the state's historic drought, California's governor emphasized climate change isn't "a hoax" in a Sunday interview with ABC News' This Week. Defending the restrictions — that target the state's residents instead of the agricultural industry — Brown issued sound advice aimed at climate change deniers. Speaking to anchorwoman Martha Raddatz, Brown said:

The weather that's happening in California, that weather will be reflect and show up in other parts of the world. And I can tell you, from California, climate change is not a hoax. We're dealing with it, and it's damn serious.

California's unprecedented four-year drought has caused such concern in the state that on Wednesday, Brown directed restrictions in water consumption in an executive order for the first time in California's history, citing the state's dire situation following a winter of record-low snowfall. Cities and towns will now have to reduce water use by 25 percent, and residents who do not comply may face fines. At a press conference on Wednesday, The New York Times reported that Brown said water supply agencies will carry out the reductions, adding:

People should realize we are in a new era. The idea of your nice little green lawn getting watered every day, those days are past.

However, Brown has come under fire for directing the cuts toward California residents — and campuses, golf courses, cemeteries and other large landscapes — instead of the state's agriculture industry. Under the order, large farms are exempt from the restriction — even though farms consume 80 percent of the state's water use (though they only account for 2 percent of its economy), according to the Public Policy Institute of California.

Brown defended the exemption on Sunday, stressing that farms had already taken a huge hit from the drought, and that cuts would be detrimental to those employed by the powerful industry.

The farmers have fallowed hundreds of thousands of acres of land. They’re pulling up vines and trees. Farm workers who are very low end of the economic scale here are out of work. There are people in agriculture areas that are really suffering. ...

If you don't want to produce any food and import it from some other place, of course you could do that. But that would displace hundreds of thousands of people and I don't think it's needed.

The damaging drought has raised concerns as to whether California can power through the effects of climate change without causing a huge effect on its booming economy that consists of, among others, Hollywood and Silicon Valley. Under Brown, California has staggeringly become the seventh largest economy in the world, surpassing Russia, Italy, and perhaps soon even Brazil.

Brown highlighted the severity of his executive order and said that it should serve as a wake-up call for California residents after last year's of request for voluntary cutbacks on water consumption failed to work — particularly in the state's wealthier neighborhoods.

The Democratic governor has scrambled to deal with the afflicting drought, announcing last month a $1 billion emergency package to help California cope. Brown himself is a staunch advocate of the realities of climate change. Also last month, he said that newly-declared GOP presidential candidate Sen. Ted Cruz was "unfit" to run for president due to his refusal to acknowledge that climate change was real. He also slammed Republican politicians, saying that their opposition to President Obama's efforts to decrease carbon emissions "borders on immoral."