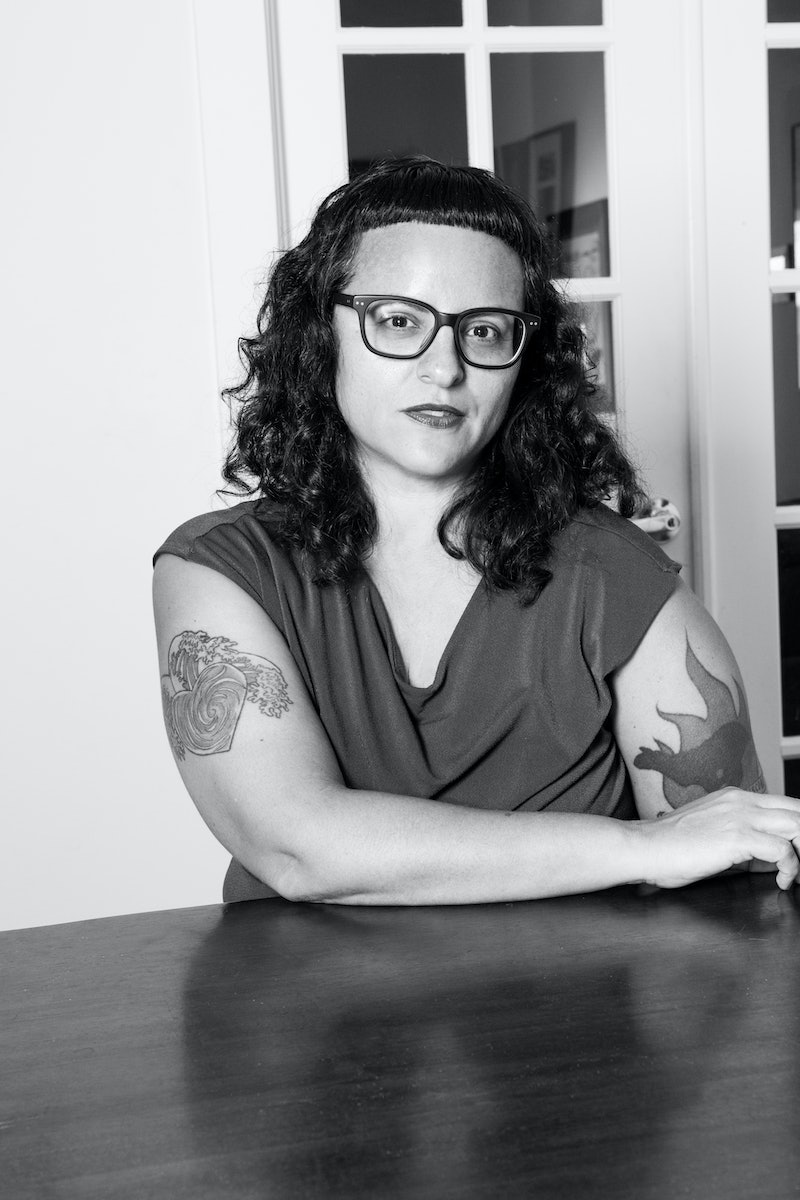 When I first encountered Wendy C. Ortiz's work in the New York Times’ Modern Love column in 2012, I cried. During a rare, childless moment with the Sunday paper, I felt her essay crack me wide open. Here was a voice unlike any other I'd ever read: honest, strong, unafraid; a voice of integrity, of pain and love, crackling with wisdom; a voice that knew itself, utterly absent of any tinge of self-righteousness that sometimes can sneak into the personal essay form; a voice, above all, to trust.

I’ve been a fangirl ever since, hungrily seeking out Ortiz's writing. In addition to The Times, her work has appeared in McSweeney's Internet Tendency, The Nervous Breakdown, Vol. 1 Brooklyn, The Rumpus, PANK, Brain, Child magazine, and many other publications. When her memoir Excavation was published by Future Tense Books this summer, I devoured it by flashlight: me, breathless; my daughter breathing deeply beside me, in the plywood bunk we shared at my childhood sleepover camp, where I’d returned to teach young teens — the irony of which was not lost on me. Ortiz goes to difficult places and lays it bare. She holds no punches, yet writes with the full muscle of her heart.

Like her large following, I was grateful to learn that we didn’t have to wait long for more. Her second book, Hollywood Notebook , is out May from Writ Large Press.

BUSTLE: Both Excavation and Hollywood Notebook are memoirs, but neither is purely linear. While a chronological past is retold in Excavation, it is interrupted by jumps forward to the adult you, a choice that brings the story from adolescence into even greater relief. And in Hollywood Notebook the structure often mirrors that of a diary or journal. There are lists, a log quality. At one point you itemize the objects in your desk, for example. Experimental yet composed. These are not random pages torn from your notebook, or if they were initially, they have now become the body. Even the page listed “random events” was constructed. How closely does the structure reflect your actual notebook? How did the different narratives determine these structural choices?

WENDY C. ORTIZ: Hollywood Notebook is edited text from a blog I kept called Lab of Lux. My friend and fellow writer Karrie Higgins gave me the space on the web in 2002; I kept this blog and a couple of others for a few years. Before the site came down I captured all the text — about 300 pages single-spaced, interspersed with comments — and held onto it, knowing I wanted to use some of it for a future project. So it was not so much a notebook but a public journal. I liked how it read years later because while it’s chronological, it also jumps in time and space.

Excavation, too, is mostly chronological but interspersed are chapters I think of as “contemporary” chapters. The tone of that book is so much more restrained, intentionally, while Hollywood Notebook is a voice that’s less restrained. I appreciate your way of putting it, “experimental yet composed.” The voices in Hollywood Notebook reflect other writers I was reading at the time, conversations I was having, in a context where I was an adult, and felt newly adult, having returned to L.A. after eight years in Olympia, WA.

The voices, too, feel disparate, while both uniquely yours. The voice of Excavation is driving, immediate, while the narrative voice of Hollywood Notebook is more sensual, wistful, even, layered in a different poetry, sometimes more distant, as if not geared for public consumption, and yet not the least closed off, but rather with an awareness of and welcoming the reader. Here, too, it seems that the content is the driver, with the abuse detailed in Excavation demanding a certain directness, clarity in tone, while HN, which is very much a memoir about writing, could be a bit more playful.

Interesting! I’ve not thought of HN as a memoir about writing. I see it as a slice of a period of time when I struggled with relationships, who I thought I’d become and who I thought I still wanted to become, and yes, writing was part of that. Trying to imagine a process I could rely on was part of that. I agree that content is the driver. Even as I write this, though, I think, what if there had been more playfulness in Excavation? I believe there’s some there — in the smallest of doses. Trying to maintain a certain tone, though, felt more crucial for that book. HN is to me like an amalgamation of voices, trying on ways of being, with a through-line underneath of a woman returning “home” and trying to understand where and how she fits even while she’s transforming.

Hollywood Notebook is to me like an amalgamation of voices, trying on ways of being, with a through-line underneath of a woman returning “home” and trying to understand where and how she fits even while she’s transforming.

I love how HN offers a window onto the writer’s process: daily practice, highs and lows and procrastinations, the catalog of rejections, poetry, screenwriting, community, desire, compounding desire, and the desire to fill. All the while in the background, simmering, always simmering, tugging on your need to return to the page, is the book project. There are also allusions to “dark clouds” and “something unspeakable” which go unnamed. Were you working on what would become Excavation during the entire time span of HN?

I was working on it off and on. I reference it when I talk about the manuscript sitting in the corner ignored. The dark clouds, the unspeakable things, though, encompass more than the content of Excavation or the struggle of writing it.

Countless lines stood out. Among them: “By 15, my body felt newly textured, a container of stories which were written and rewritten daily.” This is incredibly poignant, especially for those who have read Excavation. The body may be bursting with stories to be told, written and rewritten, but it’s far more than container. Rather, your writing feels inextricably tied to the body in how it engages your experience, ignites all senses, and reaches out, connecting your point of view, your understanding of the world with others. The line also brings Jeanette Winterson to mind. How conscious was any of this?

At the time I was writing it, only semi-conscious. It took years before I understood I was always attempting to stay as connected as possible to the body, which is a project, as both a writer and a human.

And then there is this: “Only living to get somewhere else,” which seems to speak to a persistent restlessness, one endemic to human nature: the tireless search. HN is about searching, becoming, losing, growing, the constant stir of desire, infidelity, a resistance to monogamy. And yet fast-forward and you seem to embody the moment, to be present. How have you achieved that balance?

It took years before I understood I was always attempting to stay as connected as possible to the body, which is a project, as both a writer and a human.

In Excavation, you mention your childhood journals. And Hollywood Notebook, of course, has the notebook feel. To what extent in HN were you working directly from your journals? I throw out all of my notebooks pretty much after I fill them — or at least the ones that are more than a few years old. My handwriting is piss-poor and I probably couldn’t read them if I tried. Do you keep all of your journals? Do you think at the time of writing that you may turn your stories into books?

I keep most of my notebooks. My handwriting has gotten way worse over the years, but I part with them only when I’m finished with them. I used to have much more time to go through them and highlight sentences that I wanted to return to. I want to imagine having the time and energy to be able to do that with all of them before I toss them. I still love handwriting, still feel like it offers me something composing on a keyboard doesn’t. I still draft almost everything longhand in notebooks.

Friends, lovers, a fiancé: they float in and out. Only a few, like Tess, are named. Others (P, S, AQ, Sh) are referred to by their initials. Some memoirists change everyone’s name to protect identity. What informed this choice of yours? It gives them almost a transient, interchangeable feel in relation to the “I” — the one constant, singular strength, your narrative voice.

Place is almost as important to me as body. When I’m in a place I love, I want to sink in deep.

I have never been to L.A., but your writing is so rooted in place and does such a brilliant job of capturing all that wonder that I can picture it, smell it, taste the limes. Lines like, “As I child I could make the sounds of the Hollywood Freeway turn into ocean waves” and “helicopters as sky piranha” bring the setting to life. The desert feels particularly important as a place of return, of discovery. Why is place integral to your work?

Place is almost as important to me as body. When I’m in a place I love, I want to sink in deep. At the time I was writing Lab of Lux, I was starting my first love affair with the desert. I considered making a life there. It’s hard to say what it means to me. The meanings have changed since then, though I still feel a strong and deep affinity for it. I don’t imagine living there full-time anymore. It’s enough that it’s two hours away and I feel like I know in my body the freeway and highways that get me there, so it ends up feeling innate and important.