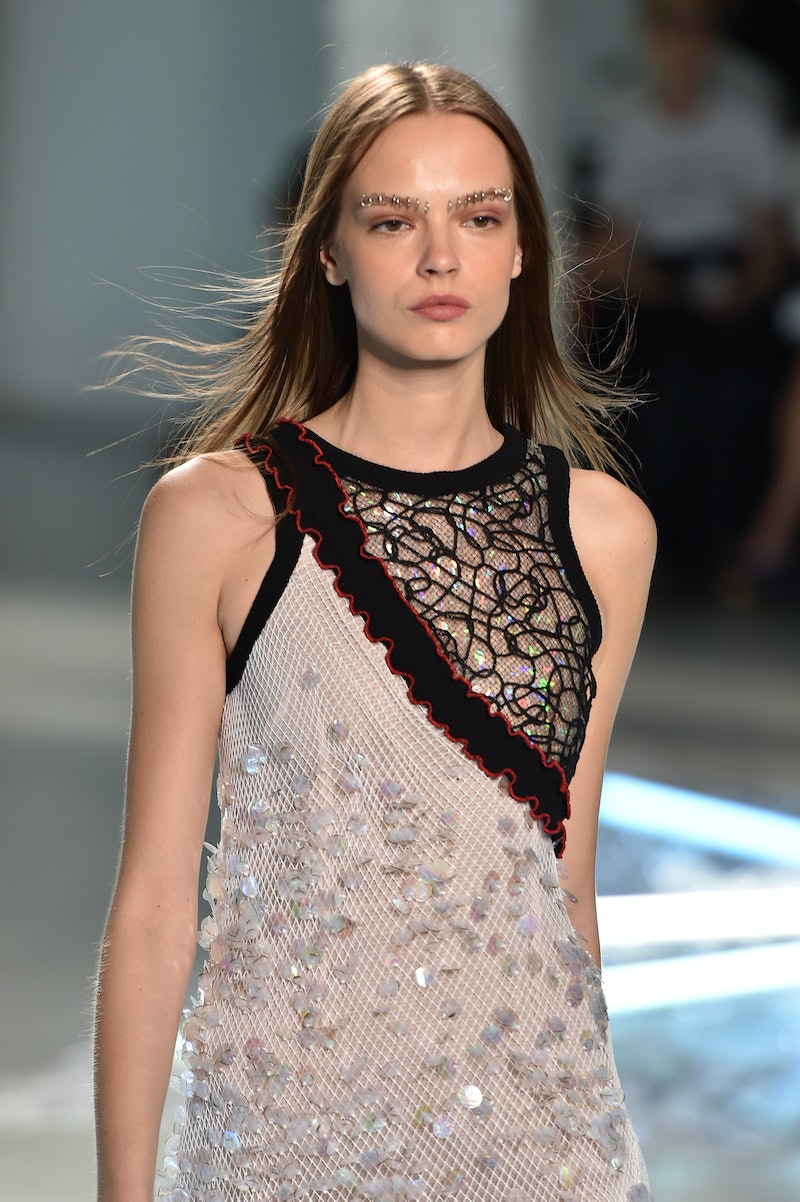 Every year, I always see some incredible standout makeup and hair trends on the runways, but before the actual season even starts, they seem to be forgotten, or they morph into a pale version of what they were originally meant to be. One of my favorite beauty trends that emerged from the spring shows last year was the use of metallic embellishments in fashion. They were all over the models during Fashion Week. There were extreme versions of the trend — such as the fake facial piercings at the Rodarte and Dries van Noten shows — as well as the gold and silver star "tattoos" at A Détacher. There were also much more wearable versions of the trend, like the metallic eyeshadows used at Vera Wang and Dannijo, as well as the glitter and foil eyeliners used at Anna Sui and Christian Siriano.

Now that spring has sprung, I would really love to see these metallic looks brought to life — rather than just relegated to the pages of old fashion magazines and the Internet. So I threw together five of the freshest ways to incorporate metallic details into your makeup and styling routine from the most everyday wearables to those meant for only the most fearless fashion freaks. Take a look, get inspired, and wear as much as you dare.

Metallic eyeshadows are an easy one to integrate into your daily makeup routine. Look for highly pigmented shadows, and prime your lids beforehand to optimize the staying power and sheen. Get the look using Urban Decay Eyeshadows in all kinds of metallic shades, like Smog (deep coppery bronze) or Lost Call (metallic sugar plum).

A pretty take on the flash tattoo trend, using foil accents on your face is an edgier way to incorporate metallic makeup, and it looked stunning on the Monique Lhuillier and Christian Siriano runways. Get the look using Stila Magnificent Metals Foil Finish Eye Shadow. Simply mix the foil shadow with the included liquid primer, and use your fingers to apply around your eyes, or wherever you want a gleam of metal. It would look amazing along the brow bone or on the outside of your eyes.

For a bold but fresh way to highlight your eyes, try using metallic liquid eyeliner, as was seen on Anna Sui's Spring 2015 models. I personally love using a sparkly liner along the lower lid and in the inner corners of the eyes, as it can make you look more awake. Try Make Up Forever Aqua Liner, which comes in gold, silver, and gunmetal, in addition to several other glittery shades, like pearly pink and emerald green.

The sheer amount of fake piercings on the Rodarte models during last year's shows might make even the most stalwart punk cringe, but they can still be source of inspiration for your everyday look this spring. I personally love the look of nose and septum rings, but if getting a real piercing isn't your thing, there are also no shortage of adorable fake facial piercings you can try instead (hey, it's still festival season after all!). Oh, and if clip-on jewelry is still a bit much for you, you can also take your inspiration from the Dries Van Noten models (right, above) and simply draw a line down your lower lip using metallic liner, to create the subtle illusion of a lip ring.

Okay, so the gold and silver stars that were all over models' faces at the A Détacher Spring/Summer 2015 show may be a bit much, and not really wearable for every day (although they'd probably work quite nicely for a mermaid or fairy/pixie costume?). That doesn't mean you can't recreate the look in a way that's more suitable, however. Try limiting yourself to using glitter stars on just the outside corners of your eyes for a cute hint of sparkle. Pro tip: Apply a dab of vaseline on your face before applying the stars to get them to stay in place. And, hey... the 4th of July is coming up soon, and this just might inspire the perfect festive look!