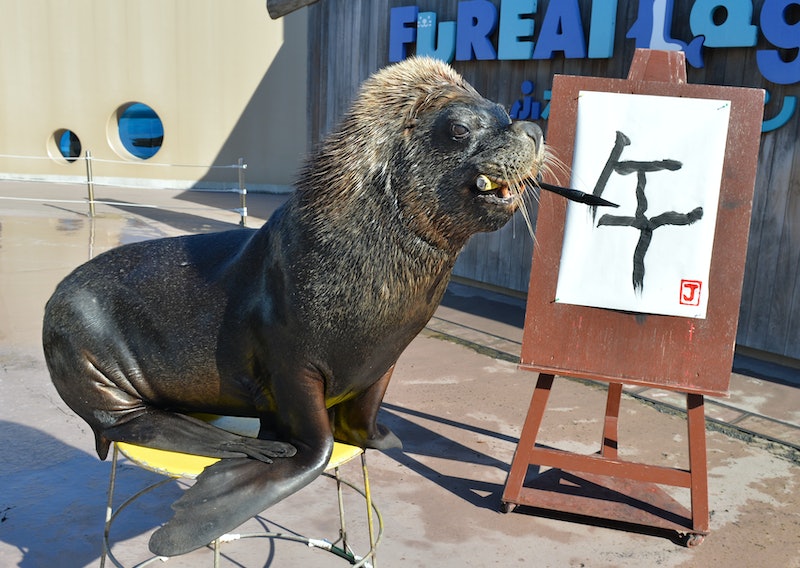 Almost 1 in 5 Americans speak a language other than English at home — but the thirst for a second, or third, language is still a huge one. And why not? Being bilingual will help your career and be awesome for your neurons: learning a new language, according to a 2014 study, is "built-in exercise" for the brain, keeping it active and improving mental function. (Plus, you can look utterly smug and sophisticated on your foreign vacations.) We're living in a golden age of free language learning apps on the go. The main problem is — which one to choose?

The best approach? Pick an app that fits how you learn, what you already know, and what language you're looking to pick up. Everybody has a different style of learning, from visual to auditory to tactile, and if you don't learn in a way that suits you, nothing's going to get lodged in your head. Some languages will require a certain type of learning — tonal languages like Mandarin or Thai, where a word's pitch contributes to its meaning, will need you to do a lot of listening and repeating, for instance — but others are much more adaptable to your learning style. And you should also think about how you'll use the language. Need it for a holiday, or want some serious long-term fluency? It all influences what app you pick.

Here are six of the best language-learning apps, all free, divided by what kind of person should snap 'em up. Choose well, and you'll be ordering food and arguing about local politics in the blink of an eye.

Duolingo is one of the most popular language-learning apps in the world, for good reason. It won iPhone App of the Year in 2014, — so let's break down what makes it special. It leads you through many different stages of learning, rather like the levels of a video game — and, just like a game, you can get stuck and lose "lives" if you keep failing a level.

It's brilliant for people with half-remembered bits of high school language. It's got a seriously acute fluency assessment (though a few friends have complained that, once you get to the upper levels, it stops being nuanced), and tracks your progress meticulously as you go. And it picks up weaknesses you could conceal in your 10th grade exams, and tests you on them relentlessly. Sorry — but it's effective.

Anki is the app version of the flash cards you used for vocabulary tests, except with essentially limitless card decks — over 80 million, according to the app itself. It's designed for people who know the basics of grammar and need to pick up on words and their definitions, but need a visual boost to make things stick.

You can customize the cards yourself, and give them visual cues — but it doesn't let you scroll through idly. Anki also features a testing algorithm which measures your speed and accuracy, and is designed to tailor future flashcard tests to highlight the stuff you failed. You'll never forget that one word for "dragon" after seeing the card 452 times.

If you just wanted some idle bits of vocabulary to toss around the bar on vacation, this is not the app for you. It's a dedicated system for embedding language deep in your brain. It's designed around the metaphor of a garden: plant the parts of the language, grow them so that they "root" deep in your head, and revisit them continually so that they remain fresh and vivid.

Some of its techniques seem a bit odd: the plant metaphor is used a lot, and users can create and suggest "mems," or memory aids, for particular words for other users — which means you can get other peoples' very odd pictures for words you're trying to lodge in your linguistic cortex. But if you're learning a language with the core objective of never forgetting it again, it's a good place to start.

HelloTalk uses one of the great learning tools in picking up another language: native speakers. The interface lets you chat with other people who are fluent in whatever language you choose, having conversations with a built-in automatic translation service. It's calling itself the world's first "language exchange social network," and it's for people who hate sitting alone memorizing vocab instead of chatting with their mates. Human contact? Awesome.

It's currently got over 1 million users and about 100 languages, so it's expanding quickly. It lets you practice your speaking without a killer international phone call charge, and it also has a doodle function if you don't know how to say the word you're reaching for. And it includes the time of day at your chat partner's location! All in all, pretty slick work for extroverts.

Rosetta Stone is the venerable name in this group. If you've ever dabbled in language learning before, you'll know its name — it's been around in various forms, from CD-ROM to online, since 1992 — and you might know its one serious feature. Rosetta Stone is about full immersion: none of your native language whatsoever. This is an app that ain't playing around.

Full immersion is what happens when you land in a non-English speaking country in real life, and it's designed to help you learn as fast and naturally as possible. Rosetta Stone uses visual and auditory cues to help you adjust, and you'll feel like a total badass going from zero to having a conversation without any aid whatsoever. It's for purists and people who love figuring out puzzles — which is what discovering the meaning of a word with no clues can feel like.

FluentU is for gossip bloggers, Tumblr queens, and the kinds of people who can identify a cultural reference at 20 paces. It uses media of all kinds, from television to music videos to the news, in another language to help people learn its nuances. You're introduced to a culture and its language at the same time, with seriously interactive subtitles that help you understand words in their context and how grammar is constructed.

It's not just sitting back and watching videos, though. It's got a quiz feature that takes the videos you've been watching and makes them into a personalized translation test. It's currently only online, but an app version is launching soon, starting with Mandarin and hopefully expanding into other languages.