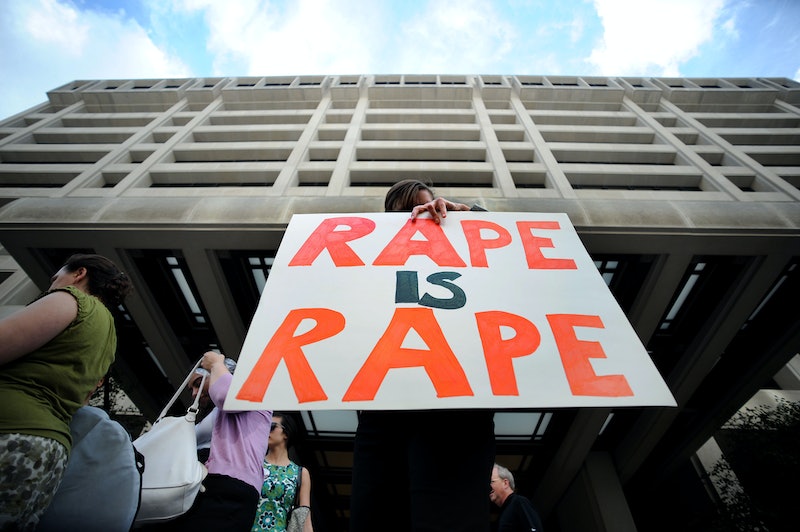 On Sunday, Rolling Stone retracted a story about an alleged gang rape of a student at a University of Virginia frat party, but we can't forget sexual assault and violence is still a very real problem on college campuses nationwide. In honor of Sexual Assault Awareness Month, here are a few sexual assault resources and websites for college students aimed at specifically clearing the air on their rights when it comes to sexual violence.

Reporting a sexual crime is already a daunting task, so these support and resource sites, many of which are led by survivors, hope to remove stigmas surrounding sexual assault. That includes answering questions on the clunky Title IX amendment, a federal civil right that prohibits sex discrimination in education, or the Clery Act, which requires all universities that participate in federal aid programs to maintain and disclose records of crimes committed on or near their campuses.

Efforts to stop sexual assault aren't just grassroots efforts led by advocates. In January 2014, President Obama also helped bring the issue to the forefront of the White House's agenda by actively launching an initiative that aims to combat sexual assault at colleges. Though just one small piece of the solution, these websites can provide an online support group that help victims realize they aren't alone.

Launched in January 2014, NotAlone.gov contains information for students, schools, and others seeking resources on how to prevent and address sexual assault on college campuses. The easy-to-navigate site offers bullet points of students' Title IX rights, helps them find a nearby crisis services center, and gives clear instructions on how to file a complaint against their school if they feel it isn't properly handling their case.

There is also a map showing universities with court filings and resolved agreements on sexual violence cases. The U.S. government-led website is part of a White House task force designed to protect students from sexual assault.

Run by survivors of sexual assault, Know Your IX is a student-driven campaign aimed at educating U.S. college students about their rights under Title IX as well as empowering them to stop sexual violence. The website shares students' first-hand experiences with violence, legal battles, and activism. An advice section called "Dealing With..." offers specialized help on everything from how to handle "finding a lawyer" to "being a religious survivor" and "surviving intimate partner violence."

The advocacy group also pushes for policy and legislative change for improved federal enforcement of Title IX. Know Your IX was co-founded in 2013 by Dana Bolger and Alexandra Brodsky, two women who said they were raped while attending college.

The survivor advocacy organization offers free and direct help to sexual assault victims who are interested in filing federal complaints to hold their schools accountable. The website for End Rape On Campus says it has helped hundreds of students at dozens of universities file Title IX, Clery Act, and other civil rights complaints against universities across the country.

The site also operates a 24-hour emergency hotline, which sometimes takes dozens of suicide calls a month, according to The Huffington Post. EROC began as a coalition of six women led by Annie Clark and Andrea Pino, who wrote complaints against the University of North Carolina at Chapel Hill and co-wrote the Bi-Partisan Campus Safety and Accountability Act to introduce new safety standards for schools and officials.

Images: Not Alone; Know Your IX; End Rape On Campus

More like this
25 Inspiring Quotes From Black Women To Celebrate Black History Month
By Kyli Rodriguez-Cayro and JR Thorpe
6 Organizations Fighting Police Brutality That You Can Support Right Now
By Syeda Khaula Saad and JR Thorpe
24 History-Making Black Women You Probably Didn't Learn About In School
By Ayana Lage and JR Thorpe
15 Black-Owned Liquor & Wine Brands To Add To Your Bar Cart
By Alexis Morillo
Get Even More From Bustle — Sign Up For The Newsletter
From hair trends to relationship advice, our daily newsletter has everything you need to sound like a person who’s on TikTok, even if you aren’t.