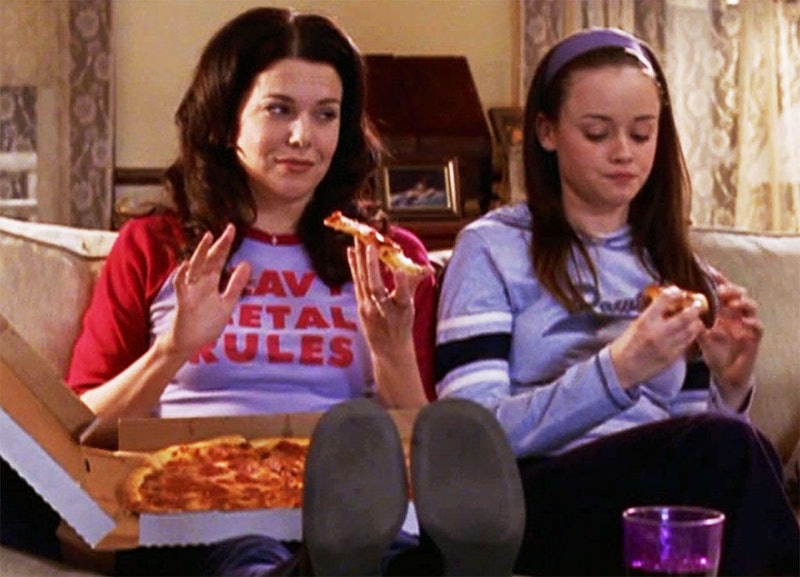 The Gilmore girls had many talents, such as their ability to talk lightening fast, their insane knowledge of pop culture, and their extreme consumption of disgustingly good food. While you were binge-watching Gilmore Girls for the five hundredth time, you might have noticed their concentration on food. Since they were both relatively talentless in the kitchen, Rory and Lorelai had to work to satiate their bottomless stomachs with the sweetest, greasiest, most artery clogging meals they can get their hands on. And, since I'm sure you're wondering how you too can mimic their eating habits, we've developed a totally scientific ("scientific") breakdown of what makes up the diet of a Gilmore girl.

Let's get this out of the way right now: Coffee takes up the bulk of their being, existing as the fuel in their tank and a starring character on the show. Like it probably should've gotten top billing, so important was coffee to these girls. Whether it was home-brewed, ordered off the cart at Yale, or enjoyed at the counter at Luke's, Lorelai and Rory would be nothing without their steady stream of caffeine.

After coffee, we're looking at a general platter of diner food, which includes but is not limited to: chili cheese fries, pancakes, scrambled eggs, cheeseburgers, and onion rings. Of course, the occasional tri-daily trips to the diner also meant that their plates came with a side order of high cholesterol and a heavy dose of regret. But what can you do when there's only three restaurants in town and you want to make moon eyes at the owner?

The next tier is generalized take-out food, including plenty of nights eating Chinese food out of the container. On the side we have a sprinkling of various sweets and junk food, your cakes, your candies, your movie night with some red vines. You know, standard.

Of course, not every meal was a greasy wonderland. Lorelai made besties with Sookie St. James, a true gourmet chef, a cooking perfectionist, and... a little scatter-brained, if we're being honest — but she knew how to make a meal. Of course ,we couldn't discount that they could be a little overly avant-garde. Pheasant sauce, Sookie, seriously? So, for all those occasions, we can count "handkerchief pasta with brown sage in a butter sauce" as a representative of all the Dragonfly Inn delicacies.

Likewise, Friday night dinners with Richard and Emily were a regular staple, leveling out their diet to include almost real food. Honestly, though, said real food is probably diluted by all the other things, boiling down to a martini (or two), to get through the meal. So, finally, we have to add in a singular pop tart as a sign of rebellion, Lorelai's gateway drug into a lifestyle that was sugar intensive and carb high. Take that, Emily.