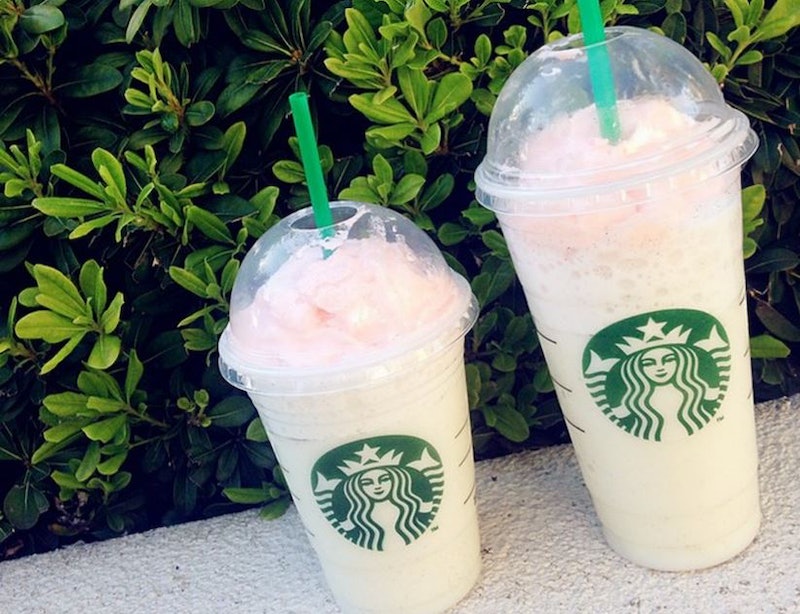 Even though it's been a solid week since Starbucks' limited-edition Birthday Cake Frappuccino disappeared from the menu, we're still kind of obsessed with it. But if you've been wondering how to order a Starbucks Birthday Cake Frappuccino even though it's no longer officially available, you're in luck — because it's actually extraordinarily easy. Hoorah for the Internet, right?

As we discovered in our investigation of whether the Birthday Cake Frap was caffeinated or not, the flavor profile of the official version of the drink was pretty much exactly the same as the Starbucks Secret Menu version. As such, all you have to do is refer back to that magnificent online resource to learn how to keep ordering a frosty, birthday cake-flavored beverage long after its official removal from the men. We've referenced the Starbucks Secret Menu Cake Batter Frappuccino recipe a number of times, but in case you need it, here it is one more time (just for good measure).

I have theory, by the way, that the Vanilla Bean Crème Frap with toffee nut syrup instead of hazelnut might also taste kind of birthday cake-ish — a lot of the other baked good-flavored Starbucks Secret Menu drinks involve toffee nut syrup, so if you're feeling adventurous, it might be worth a shot.

Of course, the one thing you won't be able to get at Starbucks now is the pink-tinted, raspberry-infused whipped cream that topped the official Birthday Cake Frappuccino. But you know what? That's OK, because we've got you covered. If you can stand waiting until you get home to enjoy your delicious cake-flavored confection, it's easy to DIY. It helps if you have a hand or stand mixer, though you could probably get the same effect with a whisk if you don't mind putting in some extra elbow grease.

The Small Things' recipe is short and sweet — it only requires three ingredients.

Bakerella tops her homemade cheese cake with whipped cream and a raspberry drizzle, which I imagine would taste wonderful atop a Birthday Cake Frappuccino. All you have to do to make the drizzle is heat a little jam up in the microwave until it liquifies. How easy is that?

It's not exactly raspberry, and it's not exactly whipped cream, but Cookies and Cups' strawberry mousse would likely taste divine when paired with a cake-flavored Frap.

Ambitious Kitchen's whipped cream recipe has a few more ingredients than The Small Things', but it's just as simple to make. Because it uses jam instead of fresh raspberries, it'll even have the same pink tinge as Starbucks' version.