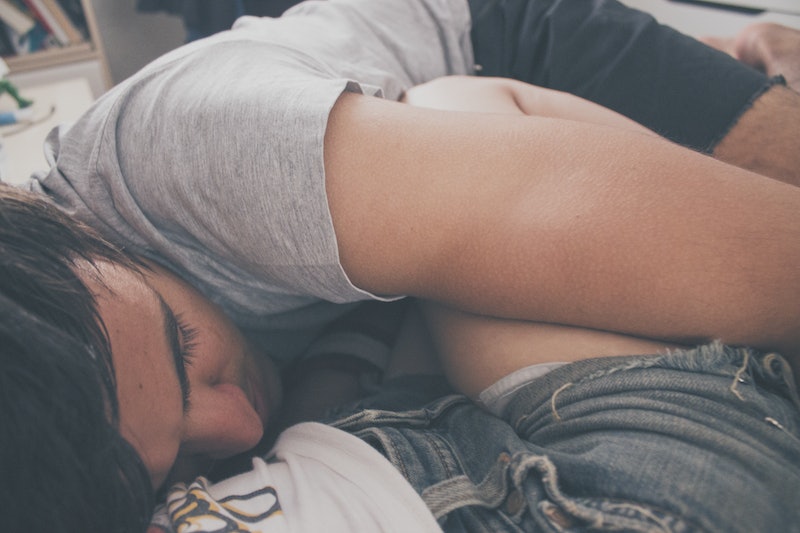 Prepare yourselves, because your world is about to get rocked a little: in her new book Come As You Are, sex educator and director of Wellness Education at Smith College Emily Nagoski claims that there's no such thing as a sex drive, and the assumption that everyone has a "drive" to have sex is harmful, especially to women. If you're feeling kind of floored, very confused, and in disbelief, don't worry, you're not alone. We will hold hands and make sense of this scary new information together.

First things first: when Nagoski says that sex drives aren't real, she's not saying that people don't naturally have a desire to have sex. That, as many of us know, is a very real thing that occurs. She takes specific issue with the word "drive" itself, which in psychological terms means "a motivational system to deal with life-or-death issues, like hunger or being too cold." So if you're hungry, your drive will motivate you to get off your butt and go find something to eat. Nagoski argues that a drive isn't an adequate way of describing sexual desire because, as she told New Scientist, "you're not going to die if you don't have sex."

Nagoski believes a more accurate term to describe what we know as a sex drive would be "spontaneous desire," because that's pretty much what a "sex drive" is when you think about it. She says that roughly 70 percent of men experience spontaneous desire, whereas only 10 to 20 percent of women experience this type of desire. For the rest of us, we may experience what's called "responsive desire," which is when we experience desire after being aroused. So whereas spontaneous desire would include things like seeing an attractive person walking down the street or having a sexy thought and wanting to have sex, responsive desire would be, for example, if your partner comes up from behind you while you're cooking breakfast and starts kissing you on the neck, and then you suddenly want to have sex. Of course, desire depends on context and you can certainly experience both types at different points, and Nagoski urges that, "Both desire styles are normal and healthy." That's a relief.

So, why does it matter exactly how one experiences sexual desire, and why does it make a difference if it's spontaneous or responsive in nature? Basically, it matters because scientists and doctors previously believed spontaneous desire was the only way to get aroused, and it was necessary for sexual pleasure. This caused a lot of people, especially women, to feel like something was wrong with them because they thought they had an abnormal sex drive. Right, because when it comes to their sexuality, women don't have enough to feel bad about already.

The way we've been looking at sexual desire also has bigger implications other than just causing insecurity; it can also cause people to seek treatment for a perfectly normal degree of sexual desire because society is telling them they should want to get laid all the time. The drug Flibanserin is being submitted to the FDA for approval, and the purpose of this drug is to treat low sex drive in women. If it gets approved (it has already been rejected twice), it could be of huge value to some women — but others could turn to it to correct an issue that isn't truly an issue at all. Didn't we all learn in second grade that different does not necessarily equal bad? At least we're finally making an effort to recognize that sexuality and desire is not a one-size-fits-all type thing. After all, as Nagoski puts it, "Is it more important that people crave sex than it is to enjoy the sex they're having?" I think not.