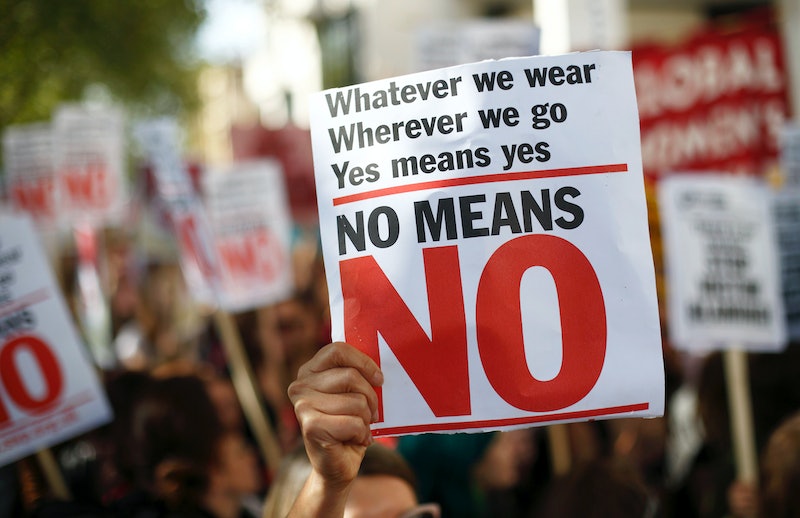 By now, you've either read Rolling Stone's bombshell exposé on a UVA fraternity's alleged sexual assault or heard about the controversy around it. The story itself, like countless others detailing sexual assault, is disturbing and harrowing, but perhaps even more sobering than the personal accounts are the cold, hard statistics of sexual assault on college campuses. If the now-discredited details of Rolling Stone story left anyone unconvinced that sexual assault is prevalent on campuses, then they should take a look at these stats. Because you can't argue with numbers.

With the help of investigative pieces like the ones from the Center of Public Integrity's project "Sexual Assault on Campus: A Frustrating Search For Justice," the Obama administration took action in 2014 to combat this issue. On Jan. 22, 2014, President Obama launched a White House task force to compile a comprehensive report titled "Not Alone," aimed at helping to prevent students from sexual assault.

The White House report's statistics, along with other statistics compiled by organizations such as the ACLU, tell a nightmarish story of its own. If you found Jackie's account — regardless of how many details did or did not turn out to be entirely accurate — to be disturbing, then these stats should be even more so, because they indicate many of those stories are potentially happening on campuses across the country right now. Take a look at these very sobering numbers.

Sexual violence is more than just a crime against individuals. It threatens our families, it threatens our communities; ultimately, it threatens the entire country. It tears apart the fabric of our communities. And that’s why we’re here today — because we have the power to do something about it as a government, as a nation. We have the capacity to stop sexual assault, support those who have survived it, and bring perpetrators to justice.

The ACLU and Students Active For Ending Rape's (SAFER) Statistics

In 2010, the ACLU cited a staggering figure from a Feministing report: 95 percent of campus rapes go unreported. The ACLU's Women's Rights Project also partnered with SAFER for a Campus Accountability Project, which compiled stats on the deficiencies in existing university policies for reporting rape.

RAINN cites studies conducted by the National Institute of Justice (NIJ) and the Department of Justice, noting that the 5 percent of reported campus assaults is far fewer than the overall number of rapes reported by the general population, which is about 40 percent. Other statistics include: