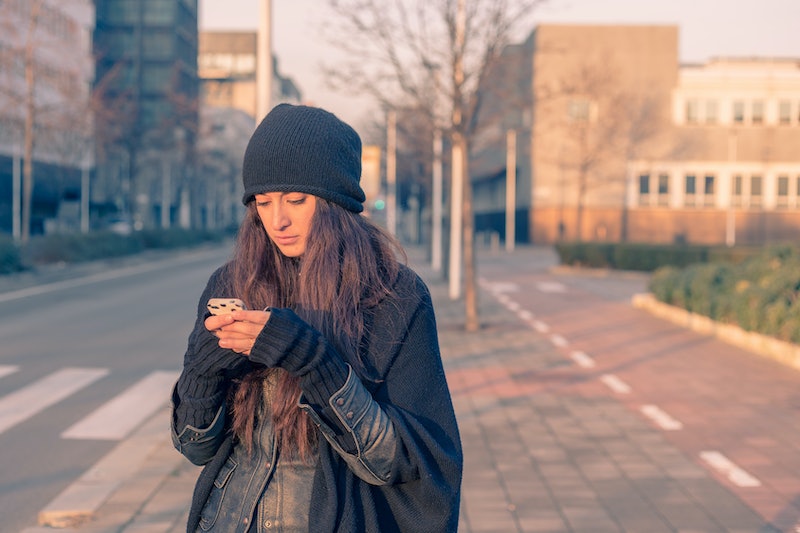 Let's be honest: Group texts suck. I feel like if you ask anyone their true feelings about them, you'll get some fairly unanimous gripes. And yet, we're all still on them. We're even guilty of starting one or two ourselves. But I'll bet many of us are in the same camp, suffering the brunt of getting added to one, and silently praying to make it stop. Sure, sometimes they're necessary — like, when trying to make a dinner reservation or get the final head count for a baseball game. But more often, group texts violate basic texting etiquette rules, only serving to make your friends resent the hell out of you.

Getting stuck on a group text with more than say, three people, is like getting stuck in a never-ending, torturous conversation with strangers you feel you can't escape. Of course, the semi-recent "leave conversation" option for iPhone users was a gift from the gadget gods since nine times out of 10 we never asked to join this ridiculous back-and-forth-and-forth-and-forth. But if you're one of the unfortunate souls whose phone doesn't yet have this option... my condolences. You're left to wonder when your sanity will return, and whether you're being judged for not participating, and... who in the world are half the people, anyway?!

The sad, dark truth of it all though, is that group texts are one of the most potent methods for punishing your friends, and (possibly) making them reconsider your friendship in the first place. This guy gets it:

Here's the reasons why group texts are the worst:

1. They Don't Say Anything

Once, I accidentally found myself on an all-dude group text with my boyfriend and some of our mutual friends, and ugh. While exchanges like these occasionally result in some dope dinner plans, usually (as in this case) it's just a competition to see who can make the most boring observations about their day.

We hate it on email, and we hate it in group texts, since it's pretty much a non-negotiable here. In order to avoid this, it would require you taking the extra measure of drafting and sending a whole new text chain, which, let's be honest, you probably won't do. And neither will anyone else. Which is why as a result, you get to hear your best friend's old roommate's cousin's take on their new sundress. Sigh.

WHO ARE YOU, AND WHY ARE YOU IN MY PHONE?!

4. There Is Always A Lag, No Matter What

Meaning, it's impossible to create a real-time conversation, and someone will always be receiving old messages when new ones have already replaced them, and man, can that get annoying.

5. They Make You Resent Your Unemployed (Or Borderline Unemployed) Friends

Guess what's super fun when you have nothing to do but just sit around in sweatpants? Keep a hearty group text going strong! But when you're super busy at work and are already getting pinged left and right with you know, work stuff? Yeah, it's not so fun.

6. They Create Are Way Too Many Side Convos

It's like being at a party, where smaller subgroups tend to happen organically (which is totally fine). Except for this: You're not at a party. You can read everyone's conversations at once, and the topics vary so wildly that it's hard to stay on track.

Hi. You have my phone number, right? You probably also have my email address. Here's a tip: Send Internet things to my computer, not my phone. Opening that crap in Safari is a nightmare and eats data.

8. They Frequently Get Intense When You're Busy

Bosses just love when your phone dings like a kid's during super-important meetings. JK, they do not.

So. Many. QUESTIONS AT ONCE.

10. They Stretch Well Into Bedtime Hours

Oh man, all that incessant pinging and buzzing can get super annoying when you keep getting bearded/unbearded selfies all night long, and just wanna shout "I AM TRYING TO SLEEP HERE!" through your phone. Congratulations on the big shave, buddy. Now leave me alone.

11. They Always Suck You Back In

Yep, there's always a catch: Even if you can leave the conversation, someone else can — and will — add you right back in there. Gah!

But, hey, neither are you. Time to go back to bed.