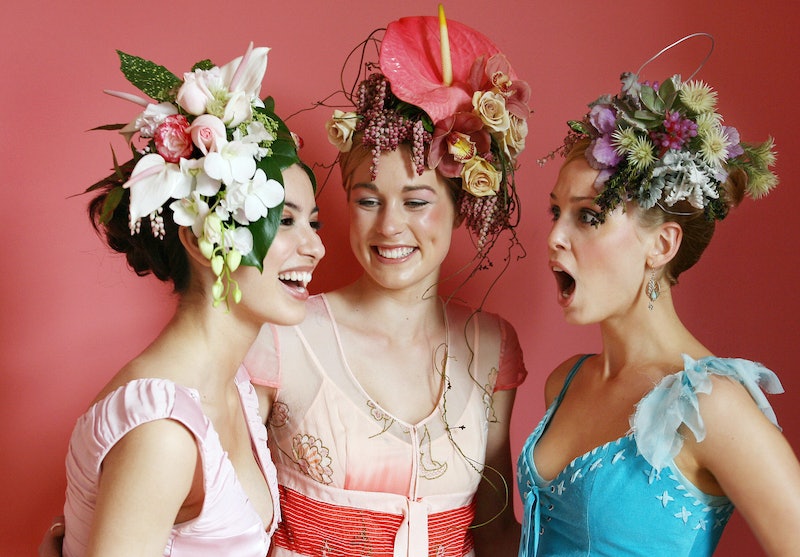 Though the point of cultural gatherings such as Coachella or Bonnaroo is more artistic than sartorial, music festivals possess a particular manner of dress — and this year it looks like oversized floral hats will be the accessory to rock. Maxi skirts, fedoras, Ray-Ban Wayfarers and jorts all abound, but the simple floral crown has always reigned supreme in terms of festival style. Whether interpreted as a slim circlet of intertwined daisies or a lush band of blooming roses, the floral wreath is indisputably a hallmark of the festival circuit. However, those dainty wreaths are giving way to full on, garden-inspired hats.

Blame Winter Storm Juno, Winter Storm Linus, or the lingering bitterness in the air a week into April, but the fashion community is clamoring for all things light, bright, and blossom-adorned this spring, making the floral hat a somewhat logical progression despite its baroque appearance. The two styles aren't incredibly different when viewed in a side-by-side comparison; a floral hat is simply a more ostentatious version of its wreath-like predecessor, and in all likelihood requires more work to construct than the average bloom-trimmed headband. Despite the floral hat's more garish nature and its complexity, the item's prevalence amongst fashion bloggers, Easter parade attendees, and trendcasters suggests that music festival attendees may be in the mood for flamboyant florals this spring.

One could argue that the floral hat began its ascent to popularity on Easter Sunday, when attendees of New York City's Easter Parade and Bonnet Festival turned up in predominantly floral designs. However, the fashion blogging community has similarly taken to the trend, as writers like Cupcakes and Cashmere's Emily Schuman lead the charge towards elaborate headgear as opposed to restrained, delicate floral accents. Though Schuman dubbed her creation a "Coachella Crown," the message was clear: go big or go home with floral toppers.

Of course, weaving flowers through one's hair is by no means a new concept to fashion. The trend hit an upswing in 2014, when The New York Times reported on the ubiquity of floral wreaths and manners of adopting the style without appearing sartorially backwards. The major variance in the trend this year is simply the number of blooms used to create the look. Perhaps the profusion of blooms atop the head even performs a utilitarian function; after all, a floral headdress could easily function as additional sun protection or a shield from the elements in case of rain. How great the trend will grown remains to be seen, but you may wish to start searching for a floral cap tutorial on YouTube now just in case.

More like this
The 6 Best Balaclavas To Keep Your Face, Head & Neck Comfortably Warm
By Jenny White
12 Triple Lobe Piercing Ideas For A Truly Unique Stack
By Paris Giles
'The Circle' Season 4 Star Yu Ling Wu Is Already A Beauty Icon
By Erin Stovall
The Little Princess Trust Is Accepting Afro Hair Donations For The First Time
By Tomi Otekunrin
Get Even More From Bustle — Sign Up For The Newsletter